The senate has referred three dual-citizenship cases to the High Court as crossbenchers push for tighter eligibility requirements for all politicians.

The three dual-citizenship cases in recent weeks that sparked the resignation of two Greens senators and the demotion of a government minister have been referred to the High Court.

The senate resumed sitting this afternoon following a lengthy winter break and dealt with the issue as its first order of business.

Nationals senator Matt Canavan, who was forced to resign from cabinet last month, was in the chamber and confirmed he will not be voting until the High Court resolves the matter. 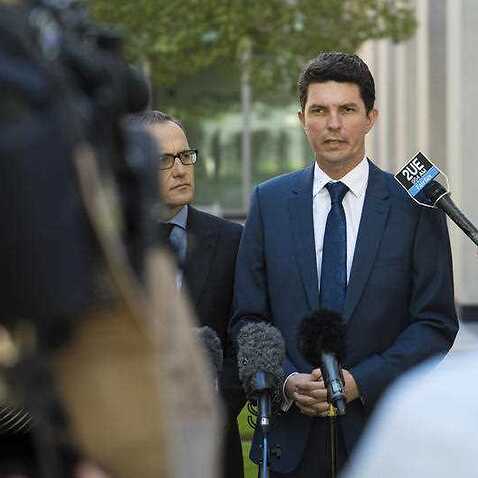 Explainer: Why was Greens Senator Scott Ludlam forced to resign?

Senate crossbenchers led by Derryn Hinch have joined forces with the Greens in a push to make all politicians prove they have revoked citizenship of other countries before they stand for parliament.

“I hope we get support. I’m not sure what the major parties are going to do about that though,” he told reporters in Canberra.

“I suspect there are more coming forward. I suspect that's why the major parties don't want to go there.”

The Greens are putting a motion to the senate tomorrow to refer One Nation's Malcolm Roberts to the High Court too as questions loom over his eligibility to sit in parliament.

He has been asked to release documents showing he was not a dual British citizen when elected last year.

The senator says he wrote to British officials to renounce his British citizenship before nominations closed for last year's federal election.

But he says the British High Commission did not confirm he had renounced his citizenship until December 5, after he had started his parliamentary term. Former Greens senator Larissa Waters, who was caught up in the citizenship debacle, has confirmed she will put her hat in the ring to recontest her Queensland seat.

She has renounced her Canadian citizenship, which forced her resignation from parliament last month.

“After a couple of weeks of personal reflection, I have decided that I will put my hand up to recontest the seat, whenever the membership decide that process should commence," she said in a statement.

I'm no longer Canadian! & I have more to do in the Senate, so I'll nominate to recontest. In meantime we @QldGreens have state seats to win!

Her former colleague Scott Ludlam, who also resigned after discovering he was still a New Zealand citizen, has not shown any intention of returning to politics.

The former senators have been granted a voting pair while the party decides on their replacements.

The Greens are also calling for an independent audit of the citizenship status of every MP and senator.

“We think it’s important to restore faith in our democracy,” Greens leader Richard Di Natale told the senate this afternoon.

“This isn’t an approach the Labor party supports,” Senator Penny Wong said in response to the plan.

"I know I'm eligible and was eligible when I stood. And that's because I'm a member of a professional party," he told reporters in Canberra. "I have decided that I will put my hand up to recontest the seat": Greens' Larissa Waters who resigned after it was revealed she had dual citizenship.
AAP