Victorian and federal authorities have sparred over an incident that saw 17 travellers from New Zealand slip into Melbourne after arriving via Sydney yesterday.

Victorian Premier Daniel Andrews says he's “disappointed” and "frustrated" more than a dozen travellers from New Zealand were allowed to leave Melbourne Airport and enter the community on Friday evening after arriving via Sydney.

The 17 passengers had landed in Australia on Friday as part of the first group of trans-Tasman travellers.

From Sydney, they then allegedly caught a connecting flight to Melbourne, which is not currently accepting travellers as part of the bubble.

In a statement released late on Friday night, Victoria’s Department of Health and Human Services said its authorised officers do not have legal authority to detain the travellers.

“Victoria has not agreed to a travel bubble arrangement with New Zealand and did not expect to receive international travellers as a result of NSW making that arrangement,” the DHHS statement said. 'One-der-ful': Victoria records just a single new case of coronavirus and no deaths

The Australian Border Force declined to comment and said it was a matter for Victorian authorities.

Melbourne Airport referred SBS News back to the DHHS. NSW Health said enquiries should be directed to the federal Department of Health.

The federal Department of Health and Sydney Airport have also been contacted for comment.

Mr Andrews told a media conference late on Saturday morning the travellers left the airport "within minutes" and the state government was waiting for ABF to provide passenger cards for each of the 17 travellers.

"As soon as we get that detail, we will be visiting each of those people and making sure that they are fully up to date, as it were, when it comes to the rules, the regulations, the structures that we have in Victoria," he told reporters. 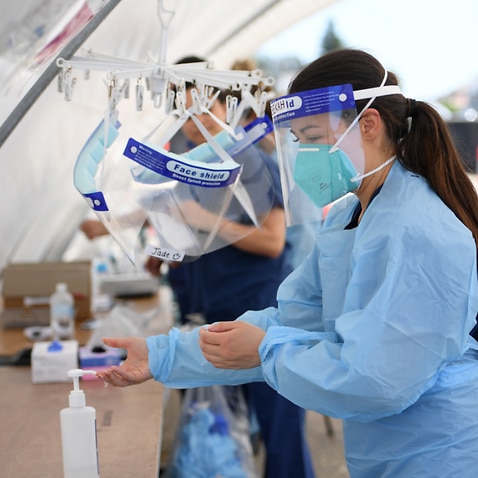 Mr Andrews said he was confident of getting to the bottom of the issue by the end of Saturday and he did not think the travellers necessarily needed to be tested for COVID-19, given they had come from a country with no community transmission.

But he said he remained frustrated by the incident.

"The frustrating thing is we don't know where these people are, who they are, what their reason for travelling was, or have any confidence that they know there are rules in place in Victoria," he said.

Mr Tudge said the federal government received Victoria’s request for the 17 travellers’ passenger cards at 8am and they were delivered to the state government at midday.

He also accused Mr Andrews of trying to manufacture a distraction from his handling of Victoria’s coronavirus crisis. The government hopes the digital system to be in place by this time next year to allow more efficient coronavirus contact tracing once international borders reopen. The system would also allow a vaccine certificate to be attached to a travellers profile once one is globally available, Mr Tudge said.

Liberal MP Tim Wilson said earlier on Saturday morning he didn’t have any problems with what happened.

“I don’t really understand what the issue is,” he told the ABC.

Meanwhile, more Australians are preparing to arrive home next week after being stuck overseas because of the COVID-19 pandemic.

The nation's quarantine capacity has been expanded after the federal government and the Northern Territory reached a deal that allows a mining camp south of Darwin to be used for returned travellers.

The quarantine deal will stretch until March, allowing up to 5,000 people to see out their 14 days' mandatory isolation at the Howard Springs facility over that time.

However, there are still more than 29,000 Australians trying to come home, with about 3,000 considered vulnerable. Those deemed vulnerable will have first priority for the flights.