As another round of peace talks convene in Kazakhstan, both sides continue to accuse each other of violating a fragile ceasefire.

There was a moment in August when the world found itself staring into the back of an ambulance.

It was dark outside, a cluster of cameras in the ring of light cast from the vehicle on the road, all their lenses pointed at a little boy in an orange chair.

It was a moment of pause: for the boy, as he gazed silently into the glare, and for those watching him; a brief line of connection to his reality.

Omran Daqneesh, five years old, touched the wound he couldn't see on his head, stared at the blood and dust on his hands, rubbed them onto the seat.

That brief moment - in a war already well into its sixth year - somehow transcended the daily churn of dust and fighting and airstrikes, and people across the globe stopped to look.

Perhaps it was Omran's lack of tears, his raw bewilderment that caught their attention; or his cartoon Nicklodeon t-shirt, his feet that only just reach the end of the seat. Perhaps it was the look in his eyes - his simple acceptance of the horror around him, his palpable weariness. Some suggested he was channelling the mood of Syria.

This is a war older than Omran. 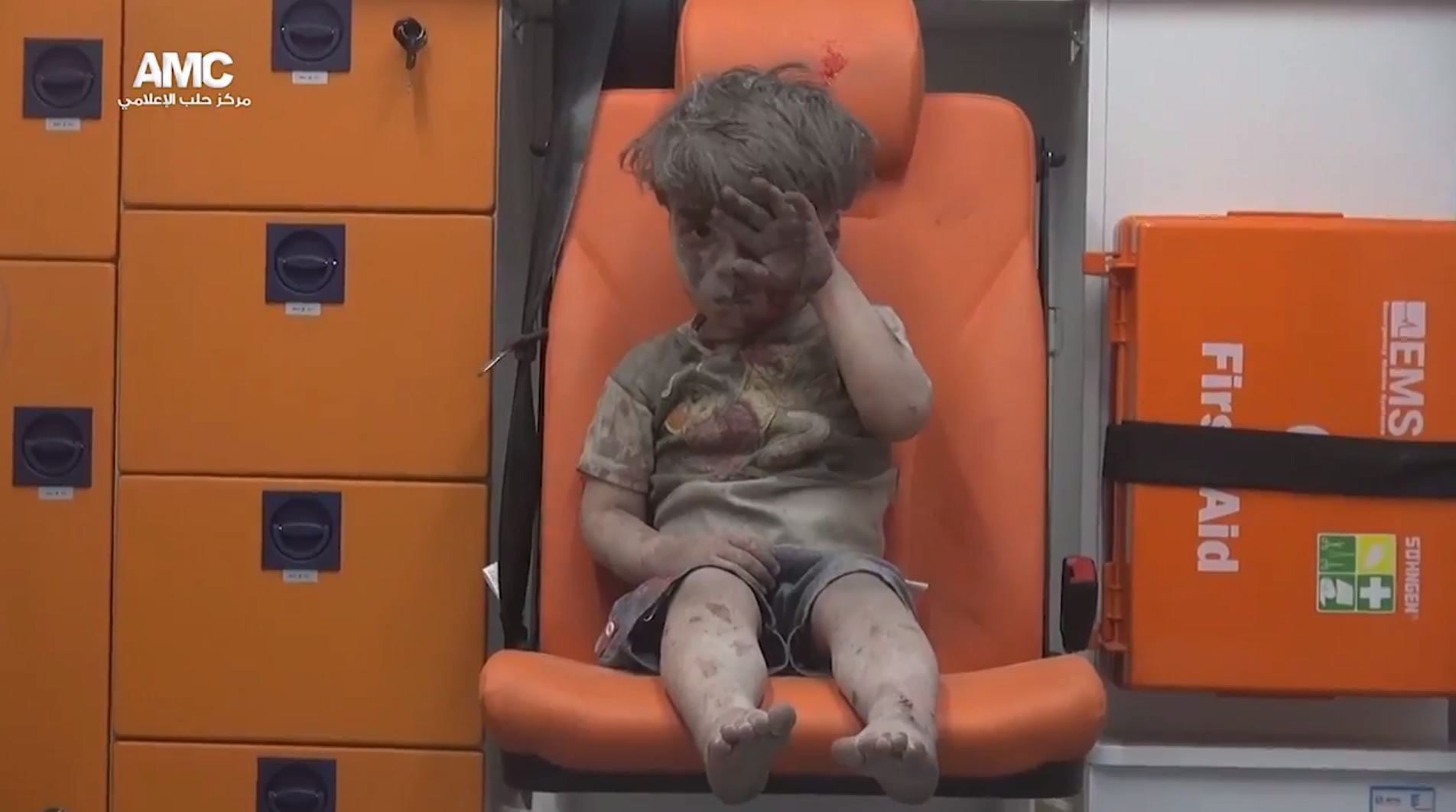 A "torture chamber", says the United Nations, washed by a "tidal wave of bloodshed". The rhetoric of the Syrian conflict is sprawling, immense.

Zeid Ra'ad Al Hussein, the UN High Commissioner for Human Rights called it the "worst man-made disaster the world has seen since WWII."

Still, it barely encompasses the enormity of this war.

The numbers are so huge, they become almost incomprehensible.

More than 11 million Syrians have fled their homes - nearly half the population of Australia.

Activists estimate more than 320,000 people have been killed - nearly the population of Canberra.

The UN says 2016 was the deadliest year yet for children. UNICEF says there are 5.8 million children in need - more than one and a half times all the school students in Australia. Of those, some 280,000 are living under siege.

This is a war sparked by the graffiti of a then-child. One Wednesday evening in the early Arab Spring - 14-year-old Naief Abazid and his friends scrawled a message on a school wall: "Your turn is coming, Dr [Assad]."

He was just doing what the bigger kids told him to, with a can of black spraypaint under the window of the principal's office, trying to make them laugh, he said, years later. He didn't mean to launch a revolution.

"It was something silly," Abazid said, of what happened that day in Daraa, "I was a kid. I didn't know what I was doing."

Abazid's graffiti and the subsequent detention and torture of he and his friends, gave rise to rebellion. The rebellion was met by automatic weapons. Then a popular uprising became a proxy war.

Accusations of war crimes directed at all actors - but most frequently at the Syrian government - have become a near-refrain.

A new UN commission of enquiry report says the Syrian air force deliberately bombed a spring outside Damascus in December, cutting off the water supply for 5.5 million people living in and around the city.

The Syrian government had blamed rebels, but UN investigators say the evidence showed the damage was caused by at least two air strikes.

The report also says the Syrian air force bombed a complex of five schools in Haas, a village in rebel-held Idlib province, on 26 October killing 36 civilians, among them 21 children.

Both acts labelled by the UN commission as war crimes.

INTERACTIVE: Move the slider to see how areas of control have changed over the last year.

Aid workers and medical staff have become targets. "Syria has become the most dangerous place on earth for healthcare providers," say researchers in their first report for the Lancet Commission on Syria.

The "weaponisation" of healthcare: the killing of hundreds of healthcare workers, the targeted destruction of medical facilities has profound implications for medical neutrality in conflict zones

The battlefields are filled with a multitude of factions - guns turned on each other.

Opposition groups include both Islamist militias and more moderate factions, supplemented by Kurdish fighters, backed by Saudi Arabia, Turkey, and until recently, the United States.

Despite fighting against Mr Assad's troops, Turkish forces and Kurdish militias also clash - over long-running disagreements on control of the area on their shared border.

All sides are fighting IS, who rose to prominence in Iraq and Syria amid the fractious conflict.

They have provided a common enemy.

Syrian forces wrested the ancient city of Palmyra from their grasp in March 2016 - a symbolic win - over the course of the year to be lost, and won again.

United States Marines have joined boots on the ground, deployed to strengthen the fight against IS, by new US President Donald Trump.

Middle East analyst Rodger Shanahan, from Sydney's Lowy Institute, says the new US administration is still grappling with their understanding of the protracted conflict.

"But I think they're now coming to grips with the complexity of the Syrian situation as the Obama admininstration has had to do for the 6 years before," he told SBS News, "so I think, while [Mr Trump] has said a number of things about how simple it would be to defeat Islamic State in Syria, that's only been one side of the question. In the last year, some factions have won ground and some have lost. Military commanders say IS is on the defensive.

But this was the year the world watched a battle for a city.

Before the war began, Aleppo was Syria's largest city. A year ago, it was in its 44th month of siege, bombs raining down from Russian and Syrian warplanes on more than 300,000 people in the rebel-held east.

Watch what happened in the 2016 Battle for Aleppo here:

"We've probably seen the shift of the momentum go towards the Assad regime somewhat, but they're still not in any position to reassert control over large parts of Syria," he said.

That also doesn't mean that Aleppo's residents are receiving aid.

"The high insecurity inside Syria and the constantly shifting frontlines make it very difficult for us to access all these areas on a regular basis," Evita Mouawad from medical NGO Medecins Sans Frontieres told SBS, from their regional headquarters in Amman.

While emergency care has been prioritised over the last few years, other basic needs have been ignored, Ms Mouawad explained.

"This is why non-communicable diseases and mental health and vaccinations have maybe not been prioritised, but of course if you have heart disease or diabetes and it's not treated for a long period of time, you could also die," she said.

Deep frustration has set in on all sides after numerous rounds of peace talks, numerous ceasefire violations.

Discussions over the last year have moved from those brokered by the UN in New York and Geneva to those led by Russia and Turkey in Moscow and elsewhere.

Syria's opposition says they won't be attending this week's negotiations in Astana, because government forces are not respecting the cessation of hostilities in civilian areas.

Progress is likely to be slow, says Mr Shanahan.

But even in this war, so entrenched and complex - now entering its seventh year - Ms Mouawad says those living through it still have to believe an end will come.

"They are very resilient and they want to believe that one day they'll be able to go back to their homes and live normal lives like everybody else." 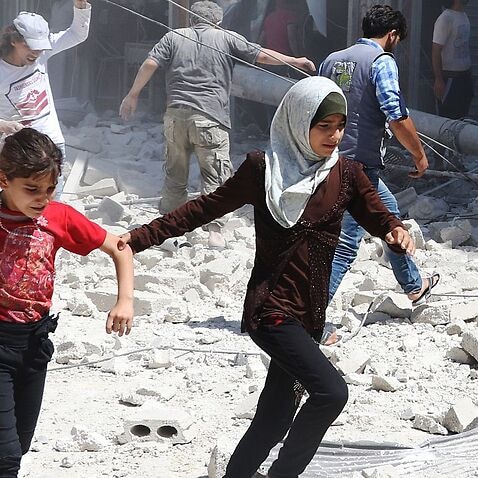 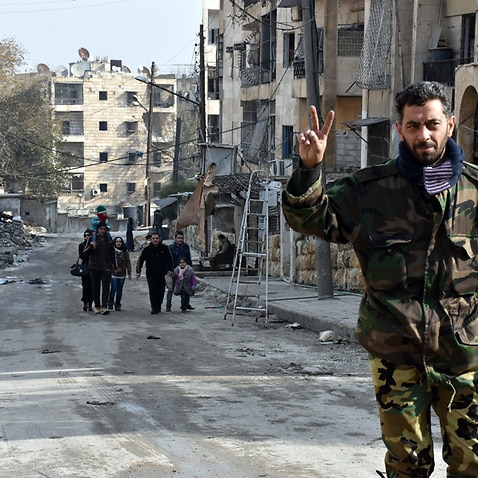 United Nations accuses both sides in Syria of war crimes