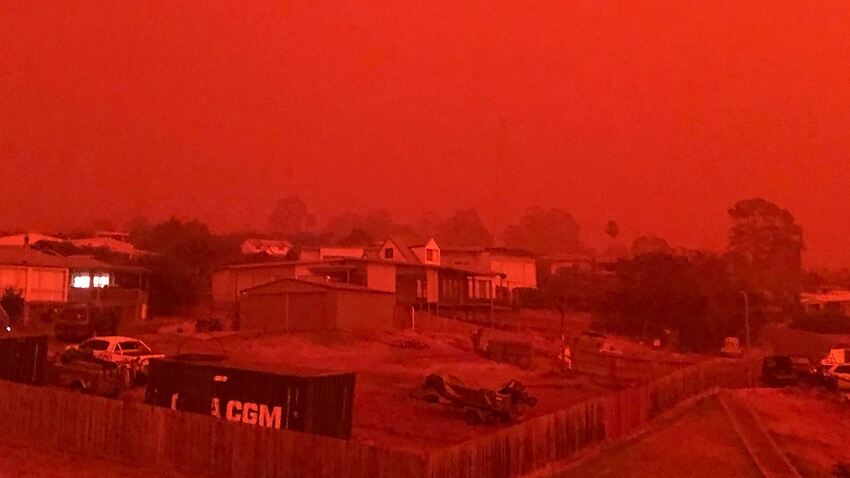 Skies across Australia's east coast have once again turned an apocalyptic red as soaring temperatures and strong winds cause conditions to deteriorate across large parts of NSW and Victoria.

More than 20 fires have now been elevated to an emergency warning level.

Residents have shared photos on social media showing the increasingly darker colours of the sky; from a deep yellow, blood red to almost black at about 3pm.

"Smoke and orange glow almost 360 degrees... This is becoming normal."

My brother sent me this from where he is at the moment. Narooma down the South Coast. pic.twitter.com/5yVqd5MeVO

Just days ago, residents in the East Gippsland coastal town of Mallacoota woke to similar scenes of blackened skies on New Year's Day.

Twitter user Brendan described it as "a lot like a really long eclipse with multiple sun sets and rises".

In one post he said: "So dark that people are almost invisible."

In NSW, the rising temperatures have prompted warnings for communities on South Coast, the Snowy Mountains, and areas on Sydney's doorstep to take shelter.

The suburb of Penrith, in Sydney's west, became the hottest place on the planet Saturday when the mercury reached 48.9C at 3pm.

NSW Rural Fire Service community safety officer Marty Webster says there is an "enormous" amount of fire in southern NSW and conditions have been worsening in line with forecasts.

"It felt this morning we may possibly get away (with it) but things are starting to unfold the way it was suggested," he told ABC TV on Saturday afternoon.

"Our grave concern is for people who haven't acted on our advice and are in bushland areas."

At one point on Saturday afternoon, there were 12 fires burning at an emergency warning level.

Premier Gladys Berejiklian said it was now not safe to leave areas at emergency warning level.

"The feedback we are getting from the ground is that people have congregated, those who've chosen to say in the fire zones have congregated in the areas that the RFS have indicate are safe," Ms Berejiklian told reporters on Saturday afternoon.

Defence aircraft are working to evacuate people from critical parts of Victoria's fire-ravaged east where firefighters are expecting a long campaign.

Critical areas of East Gippsland include Omeo and Swifts Creek where winds have pushed fire fronts towards the towns.

Erratic winds are fuelling increased fire activity and people across East Gippsland, northeast Victoria and other areas are being told it is too late to leave.

Authorities say there are 21 people missing in the East Gippsland fire zone, revised down from 28 on Friday. The fires have already killed Buchan man Mick Roberts and Maramingo Creek man Fred Becker.

Authorities are trying to get to 18 isolated communities via military helicopter to check on residents' welfare and provide satellite phones and provisions. So far they have only reached two communities.

"As soon as they get notified that the smoke will allow entry, they will be into there through the course of the day," Victoria Police Chief Commissioner Graham Ashton said.

Across the fire zone in East Gippsland, there's usually a population of about 100,000 people and police estimate up to 70 per cent of them have fled.

The Princes Highway has been closed towards NSW from Lakes Entrance and the Hume Freeway is also cut because of a fire at Euroa. Phone and power lines are down across the fire-affected areas.

EMERGENCY WARNING: Currowan Fire. The fire continues to burn quickly towards the coast. All coastal areas east and west of the Princes Hwy between Nowra and Kioloa should seek shelter as the fire approaches. #NSWRFS pic.twitter.com/5zj1Bn9Dmm

Temperatures are expected to hit 40C at Gippsland and areas of the northeast are due to reach 45C, and a gusty southerly wind change has started.

There are fears dry lightning storms will start more fires.

An unprecedented state of disaster was declared on Thursday, triggering powers introduced after the fatal 2009 Black Saturday bushfires, including allowing authorities to compel people to leave.

More than 1,000 firefighters are battling nearly 50 fires across the state. The blazes have already scorched 830,000 hectares in Victoria alone.

Firefighter and liaison officers from the United States have joined local crews, with about 70 American and Canadian firefighters due to arrive next week.