An Australian skink which laid eggs and gave birth weeks later provides an opportunity to study the evolution of pregnancy, a Sydney researcher says. 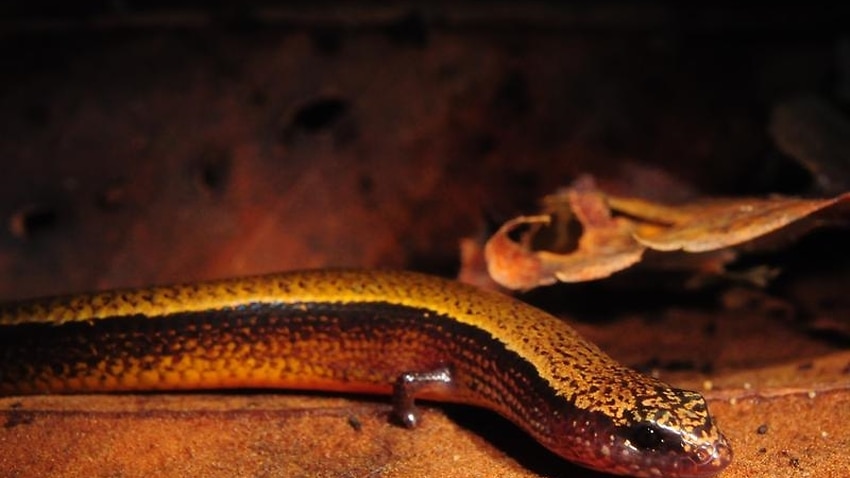 A three-toed skink gave birth to eggs followed by a live baby weeks later from the same pregnancy. (AAP)

Skinks may be much stranger than previously thought after researchers discovered a lizard which laid eggs and gave birth to live young in the one pregnancy.

Researchers at the University of Sydney observed a three-toed skink lay three eggs and weeks later give birth to a live baby.

"This is the first time that anyone has observed live birth and egg laying in a single litter in a vertebrate animal and it's very, very unusual," research author Camilla Whittington told AAP.

Dr Whittington said they knew the species was somewhat strange given it is "bimodally reproductive". The skinks give birth to babies in northern NSW but lay eggs in Sydney.

"What we didn't know before was some individuals seem to be able to choose whether they lay eggs or give birth to live babies," Dr Whittington said on Wednesday.

"That was pretty staggering. We had no idea that could be the case. So I think it just makes this lizard even weirder."

Previous research shows that if a Sydney skink was taken north it would still lay eggs while livebearers transferred south would also continue to reproduce as they previously did.

"I'm curious to know what happens if you breed an egg layer with a livebearer - what do their sons and daughters do?" Dr Whittington said.

Another skink in South Australia has also been shown to be bimodal.

Bougainville's skinks give birth to babies on Kangaroo Island while on the mainland they lay eggs.

Only a handful of species in the world do this.

The University of Sydney study into the three-toed skink will be published in Biology Letters this week.

Additional research is planned with Dr Whittington hoping to map where they lay eggs and where they give birth.

The three-toed skink, which looks like a baby snake with tiny legs, is widespread along Australia's east coast and is often seen in gardens or compost heaps.

"The more we look at these skinks the more we will understand whether our observation is just a bit of an oddity or whether it's widespread," the Sydney University researcher said.

"I love skinks, they're really charismatic when you get to know them, and lots of people in Australia catch skinks in the garden when they are kids. I think they are just fascinating animals."