An environmental disaster looms at heritage-listed Solomon Islands site after 60 tonnes of oil spilled into waters. 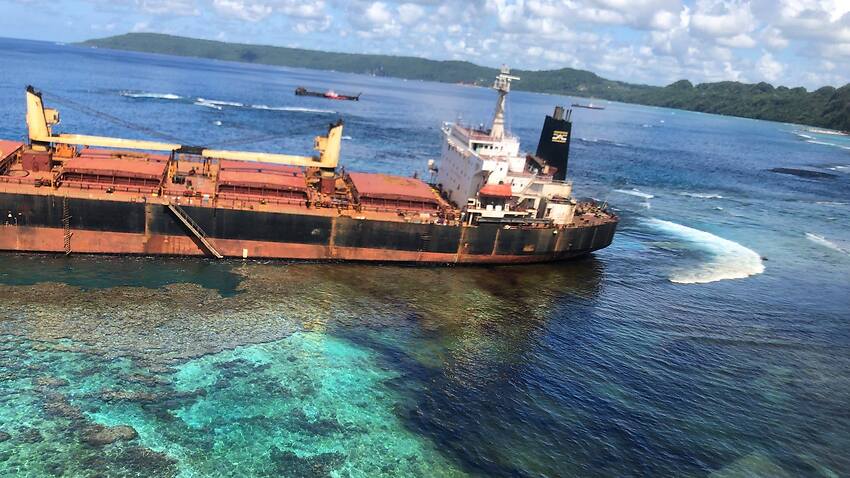 A salvage operation is underway more than three weeks after the MV Solomon Trader ran aground on a reef in the Solomon Islands while loading bauxite on the remote island of Rennell during tropical cyclone Oma.

People are being warned to stay away from the “toxic” oil spill.

Sixty tonnes of oil is estimated to have already spilled with another 600 tonnes still in the tanks of the leaking ship.

Australia is assisting the Solomon Islands government with the salvage and clean-up after a plea for help from care-taker prime minister Ric Hou.

“Australia is extremely concerned at the scale of this disaster, the impact of this oil spill will have a devastating effect on the surrounding environment, including potentially on a protected UNESCO World Heritage site, as well as the livelihood of the people of Rennell,” Australian High Commissioner Rod Brazier in the capital Honiara told a local briefing of journalists.

A Solomon Island National Disaster Council situation report said there is a “lack of in-country capacity to deal with a potential environmental disaster of this magnitude” and that “the primary responsibility to salvage and mitigate any spill rests with the charterer of the ship and the ship owners”.

Australia’s Department of Foreign Affairs and Trade (DFAT) has updated its travel advice for Solomon Islands warning “reconsider your need to travel” to Rennell because “heavy fuel oil is a toxic substance and you should avoid exposure to it”.

“Oil spill makes it impossible to fish or bathe in the sea, oil is still leaking, people are worried, “ Derek Pongi from the Tehakatuu tribe on Rennell told SBS.

“Loading of bauxite is still on in the bay. (We’re) calling on the company to halt loading.”

Australian Maritime Safety Authority (AMSA) experts deployed to assist have confirmed oil contamination has spread into the surrounding waters and along the shoreline.

UNESCO in a statement said it is “concerned about the impact” and “is working with the national authorities to ascertain the status of the situation and the best mitigation measures to be taken.”

The 225m long bulk carrier hit a reef on February 4 on Rennell, the largest raised coral atoll in the world with the largest freshwater inland lake in the Pacific, about 250 kilometres south of the capital Honiara.

The eastern part of Rennell was UNESCO World Heritage listed in 1998 but designated as “in danger” in 2013 because of logging and mining operations on the western side of the island.

BMC is contracted to Asia Pacific Investment Development (APID), which holds the licence to extract bauxite on Rennell and has a controversial track record of logging and mining on the island.

BMC has said as charterer of the ship, it has no legal responsibility for the ownership or operation.

In statement to SBS, BMC said a landing craft arrived at the site on Monday, an overseas salvage team is on-board the ship and a further oil response team is due to arrive today.

Preparations for oil transfer is being hindered by damage to the ship and the flooded engine room.

“The emergency generator of Solomon Trader is facing technical issues as a consequence the cargo crane could not be made operational.”

“Cargo crane is essential to shift the salvage equipment from landing craft to the casualty.

“As a contingency suitable size generator has been identified out of Honiara."