The attacks in the Nile Delta cities of Tanta and Alexandria followed a Cairo church bombing in December and came weeks before a planned visit by Catholic Pope Francis intended to show support for Egypt's Christian minority.

Sisi declared the "three-month" state of emergency, which he must present to parliament within a week, during a defiant speech warning that the war against the jihadists "will be long and painful".

After being approved by cabinet, the sate of emergency was to take effect from 1pm local time on Monday.

The first bombing at the Mar Girgis church in Tanta city north of Cairo killed 27 people, the health ministry said.

Emergency services had scrambled to the scene when another blast rocked Saint Mark's church in Alexandria where Coptic Pope Tawadros II had been leading a Palm Sunday service. Who are Egypt's Coptic Christians?

Seventeen people including at least four police officers were killed in that attack, which the interior ministry said was caused by a suicide bomber who blew himself up when prevented from entering the church.

The ministry said Tawadros was unharmed, and a church official said he left before the explosion.

The private CBC Extra channel aired footage of the Alexandria blast, with CCTV showing what appeared to be the church entrance engulfed in flame and flying concrete moments after a guard turned a man away.

Eyewitnesses said a police officer detected the bomber before he blew himself up. 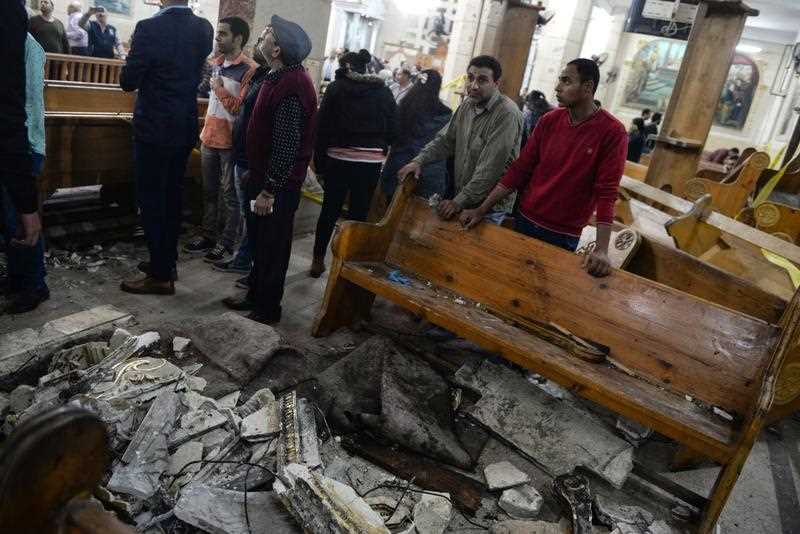 People gather to view the damages at the scene of a bomb explosion inside Mar Girgis church in Tanta, 90km north of Cairo, Egypt, 09 April 2017 (AAP)
AAP

At least 78 people were wounded in Tanta and 40 in Alexandria, the health ministry said.

Egyptian officials denounced the violence as an attempt to sow divisions, and Francis sent his "deep condolences" to Tawadros.

IS claimed two Egyptian suicide bombers carried out both attacks and threatened further attacks in a statement published on social media.

After the bombings, Sisi ordered military deployments to guard "vital and important infrastructure", his office said.

State television reported that the interior minister sacked the provincial head of security and replaced him after the attack.

On March 29, the Mar Girgis church's Facebook page said a "suspicious" device had been found outside the building that security services removed.

"I heard the blast and came running. I found people torn up... some people, only half of their bodies remained," Nabil Nader, who lives in front of the Tanta church, said Sunday.

Worshippers had been celebrating Palm Sunday, one of the holiest days in the Christian calendar, marking Jesus's triumphant entrance to Jerusalem.

Egypt had been ruled under emergency law, which allows police expanded powers of arrest and surveillance, for decades before 2012.

"We condemn the barbaric attacks on Coptic congregations in Egypt this Palm Sunday. Our prayers are with the victims & their families," he tweeted early on Monday.

We condemn the barbaric attacks on Coptic congregations in Egypt this Palm Sunday. Our prayers are with the victims & their families.

Foreign Minister Julie Bishop said Islamic State was a barbaric organisation with no regard for religion and humanity.

She was aware they were targeting Coptic Christians in Egypt and elsewhere.

"We are concerned about Easter but also any other places of mass gatherings, even tourist sites are being subjected to attacks by ISIS and similar terrorist organisations," Ms Bishop told Network Seven.

Labor leader Bill Shorten and his foreign affairs spokeswoman Penny Wong described the attacks as barbaric.
"An attack on any place of religion is an attack on freedom of religion everywhere," they said in a statement.

"Labor expresses our support and deepest sympathy to the families of those affected and for the 100,000 Australians of the Coptic faith who are part of our community."

Pope Francis, who is due in Cairo on April 28-29, offered prayers for the victims.

"Let us pray for the victims of the attack unfortunately carried out today," he said.

Copts, who make up about one tenth of Egypt's population of more than 92 million and who celebrate Easter next weekend, have been targeted by several attacks in recent months.

Jihadists and Islamists accuse Copts of supporting the military overthrow of Islamist president Mohamed Morsi in 2013, which ushered in a deadly crackdown on his supporters.

In December, a suicide bombing claimed by IS killed 29 worshippers in a Cairo church.

A spate of jihadist-linked attacks in the restive Sinai Peninsula, including the murder of a Copt in the city of El Arish, led some Coptic families to flee.

About 250 Christians took refuge in the Suez Canal city of Ismailiya after IS in February called for attacks on the minority.

"So sad to hear of the terrorist attack in Egypt. US strongly condemns. I have great confidence that President Al Sisi will handle situation properly," he tweeted.

UN chief Antonio Guterres expressed the hope that the perpetrators will be swiftly brought to justice after a Security Council statement condemned the bombings as "heinous" and "cowardly". The Cairo-based Al-Azhar, an influential Sunni Muslim authority, said the attacks aimed to "destabilise security and... the unity of Egyptians".

More than 40 churches were targeted nationwide in the two weeks after the deadly dispersal by security forces of two pro-Morsi protest camps in Cairo on August 14 that year, Human Rights Watch said.

Sisi, who as then army chief helped remove Morsi, has defended his security forces and accused jihadists of attacking Copts in order to divide the country.

In October 2011, almost 30 people -- mostly Coptic Christians -- were killed outside the state television building in Cairo after the army charged at protesters denouncing the torching of a church in southern Egypt.