New South Wales has released updated travel advice for anyone who has been in southern Africa in the past 14 days, as Queensland urges people not to panic. 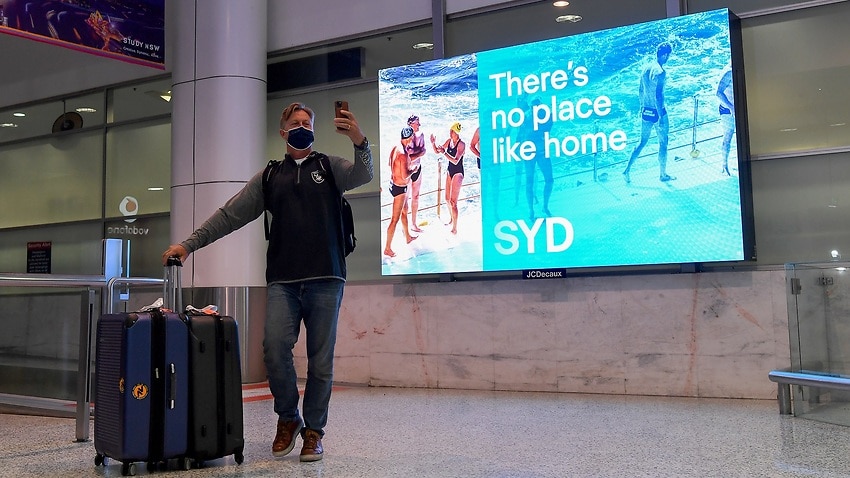 New South Wales and Queensland have responded to escalating concerns over the new COVID-19 variant, Omicron, as the federal government prepares to make a statement.

On Saturday, NSW issued new advice for anyone who travelled to southern Africa in the last 14 days.

Those affected have been urged to get a COVID-19 test and self-isolate, the state's health officials stated in a media release.

We are working closely with the Commonwealth and other states and territories to rapidly understand the implications of the new COVID-19 variant of concern, Omicron.

No cases of the Omicron B.1.1.529 variant of concern of COVID-19 have been identified in NSW to date.

NSW Health is also encouraging all people who live in the same household as those who have travelled to affected countries to isolate until further notice.

NSW has confirmed there have been no Omicron cases of COVID-19 detected in the state.

All international travellers who have arrived in the last 14 days will be contacted by text message and phone asking anyone who has been in southern Africa to get tested.

Travellers who have not been in southern Africa aren't required to isolate while waiting for their results unless they have symptoms.

It comes as the federal government is expected to reveal new travel advice on Saturday, only weeks after the country's border reopened for international travel.

The nation's Chief Medical Officer Brendan Murphy held talks with his UK counterpart about Omicron overnight, and another AHPPC meeting is scheduled for Saturday afternoon.

"It's too early - we need to get more information before we act," the deputy CHO said.

"At this stage, there's nothing to suggest there's any risk to change that position."

In Queensland, authorities have urged people not to panic about the Omicron variant of COVID-19, saying the current restrictions are adequate to protect the population.

He says there's no evidence the new strain is in Australia, but it's emergence in South Africa, where vaccination coverage is low, shows the importance of getting the jab.

"If you haven't been vaccinated yet, please come forward, get vaccinated, it's never too late," Dr Aitken told reporters on Saturday morning.

"And we say that from the situation in South Africa, South Africa also has a different vaccination rate, they're running at 24-25 per cent double vaccination.

"Queensland is higher than that, and we can go higher still, so please get vaccinated."

The deputy CHO said there's still not enough detail known about Omicron, such as its transmissibility, the clinical impacts and how effective the vaccine was against it.

It was also unclear whether the South Africa cases were vaccinated or not, he said, or whether they had comorbidities like HIV.

What we know about Omicron

The latest variant, given the name Omicron by the World Health Organisation (WHO) on Saturday morning, first emerged in Botswana and has been detected in South Africa, Hong Kong, Israel and Belgium.

It has double the number of mutations as the Delta variant that sparked a wave of outbreaks and lockdowns in Australia this year.

"It is not time to break the glass on the alarm, I don't think, but I'm as concerned about this as I have been since Delta," Burnet Institute director Brendan Crabb told ABC TV on Saturday.

"A state of heightened alert and caution is appropriate for us in Australia and for the world."

Professor Crabb described the new strain as having "a whole host of mutations that, I must say, makes me have a sharp inhalation of breath".

Read More
WHO declares B.1.1.529 COVID 'variant of concern', renames it 'Omicron'

He stressed the most important thing wasn't borders, but keeping up vaccine coverage and infection control measures.

Around 86 per cent of Australians aged 16 and older are double-dosed.

"We have to be serious about other interventions and that's what I'm concerned about: masks, clean air, our test and trace system," he said.

"These are things that are not onerous on our society. We need to keep them whether this new variant takes hold or not.

"We're crazy to drop those 'plus' things in the vaccine-plus strategy that we've adopted so well."

Health Minister Greg Hunt did not think the new variant would have any immediate effect on Australia's plan to reopen after rolling lockdowns.

"The world is looking and learning about the strain," he told reporters.

"We've always been flexible, and if the medical advice is that we need to change, we won't hesitate."

Victoria recorded 1,252 new infections on Saturday and five more deaths, while there were 235 cases in NSW and seven in the ACT.