At least 4,300 people have been affected by violent storms that swept the state of Borno, the heart of the eight-year jihadist insurrection, said the International Organisation for Migration (IOM) after assessing conditions in 44 camps for displaced people in the state.

"Rain are just beginning and they will last for three or four months," Henry Kwenin, an emergency coordinator for the IOM told AFP.

The region has been devastated by eight years of conflict, with the majority of roads inaccessible for security reasons. The conflict between the army and Boko Haram jihadists has led to over 20,000 deaths and displacing 2.6 million people since 2009.

Several hundred thousand people have fled to the capital of the region, Maiduguri.

"The number one priority is to reinforce the shelters, to build adequate drainage systems, and safe places in camps where people can gather in case of violent storms," Mr Kwenin added. 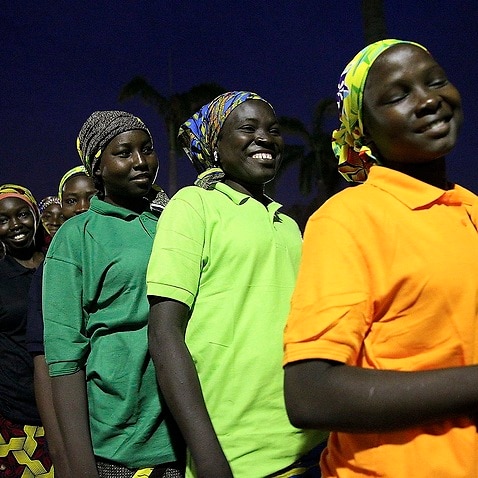 Chibok girls reunited with parents after being released by Boko Haram

"It began with a sandstorm which lasted for an hour and was followed by a heavy downpour which continued for the next two hours," said a resident of Pompomari, a district in Maiduguri.

"Our neighbourhood has little trees to break the wind and this makes our houses vulnerable to windstorms."

According to the UN Office for the Coordination of Humanitarian Affairs, 5.2 million people could need life-saving food aid in three northeast states from June to August.

But lack of funding is forcing aid agencies to cut feeding programs in the northeast Nigeria, the UN said last month, warning of growing pressure on resources as refugees return.

The World Food Program has said nearly two million people were living on the brink of famine in the remote region.