School students around the world have staged a global strike to protest against government inaction on climate change. 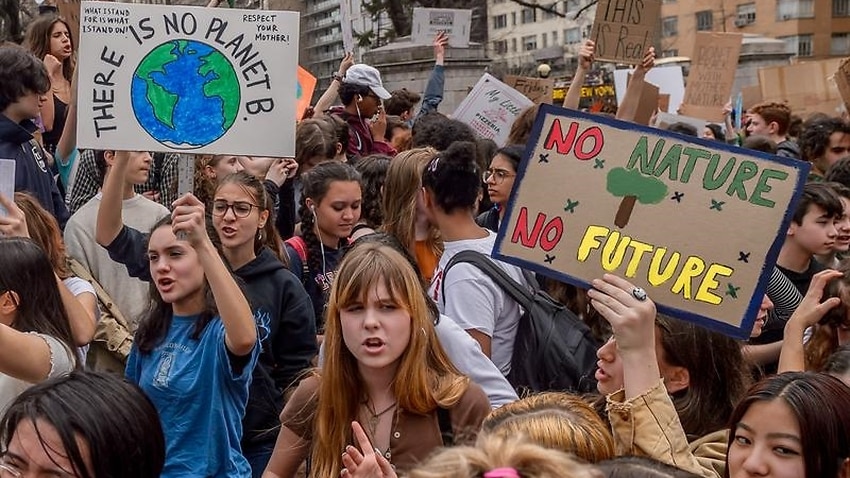 School students around the world have protested against government inaction on climate change. Source: AAP

Tens of thousands of school students around the world walked out of classes on Friday in a global strike to protest against government inaction on climate change.

"Climate change is worse than Voldemort," read a handmade sign carried by one student in Wellington, referring to the evil wizard in the hugely popular Harry Potter books and films.

"The oceans are rising, so are we," read another in Sydney.

In Europe, students packed streets and squares in Paris, Madrid, Rome, Brussels and other cities for "Fridays for Future" protests.

Demonstrations also took place across the United States. In Washington, some 1,500 students rallied in front of the Capitol chanting "climate action now!" and waving homemade placards with slogans such as "Our planet, our future."

The worldwide student strike movement started in August 2018, when 16-year-old Swedish climate activist Greta Thunberg began protesting outside her parliament on school days. She has since been nominated for the Nobel Peace Prize.

On Friday, she spoke at a Stockholm demonstration. Other rallies were held in 100 towns around Sweden.

"We have only been born into this world, we are going to have to live with this crisis our whole lives. So will our children and grandchildren and coming generations," Thunberg said. "We are not going to accept this. We are striking because we want a future and we are going to carry on."

Thousands marched through central London with banners reading "The future is in our hands" and "We're missing lessons to teach you one".

United Nations Secretary-General Antonio Guterres tweeted his support on Friday evening. "Young people can, and do, change the world," he said. "You understand we are in a race for your lives; your commitment & activism makes me confident we will win it."

The 2015 Paris climate conference pledge to keep the increase in global average temperatures to below 2 degrees Celsius (35 F) above pre-industrial levels requires a radical cutback in use of coal and fossil fuels.

In Dusseldorf, Germany, some 2,000 schoolchildren paraded with a carnival float depicting a giant effigy of Thunberg with "Do something about the climate catastrophe at last" written on her raised arms.

About 60 students protested at government house in Bangkok, holding cardboard signs to campaign against plastic. Thailand is one of the world's worst marine plastic polluters.

New Zealand Prime Minister Jacinda Ardern supported the strikes, saying teenagers should not wait for voting age to use their voices.

That contrasted with politicians in Australia and Britain, who rebuked them for missing lessons.