The Morrison government is being urged to do more for a 70-year-old Australian detained in Vietnam. 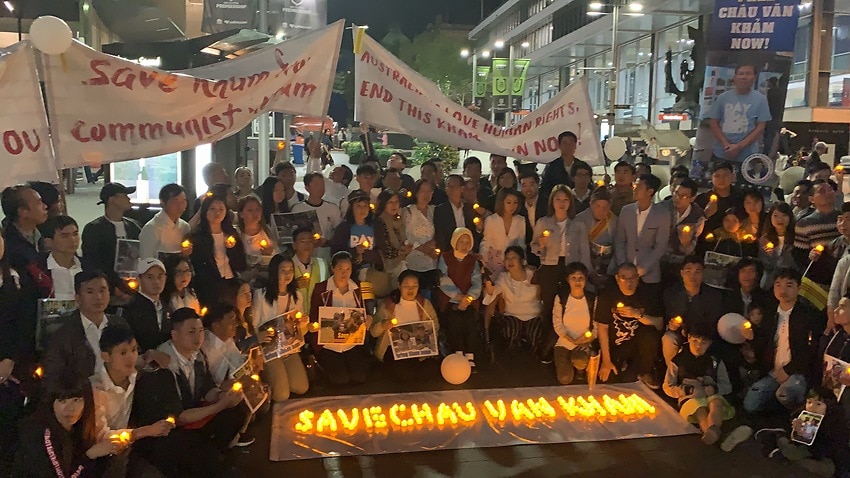 The family and supporters of Australian Van Kham Chau, a pro-democracy activist, gather for a candlelight vigil in Sydney. Source: SBS News

The Vietnamese-Australian community has launched its biggest plea yet to raise awareness for an Australian detained in Vietnam, by holding a candlelight vigil in Sydney's CBD on Friday.

Van Kham Chau, 70, was arrested in Ho Chi Minh City in January while on "fact finding" mission and after being detained for eight months without a lawyer, is due to be prosecuted under "terrorism against the People's Government" charges.

His case is expected to go to trial within two-three months, according to the latest consular notes seen by SBS News.

"We heard he is going to trial and we are concerned if we don't raise attention, he may receive a very harsh sentence," Mr Chau's wife Trang Chau said at the vigil.

The retiree, who is a member of pro-democracy group Viet Tan, has been charged under Article 113 of the Criminal Code of Vietnam and authorities are still investigating whether to charge him for breaching Article 341, which relates to fabricating documents.

Vietnamese authorities allege he used a fake identity card to enter the country from Cambodia.

At the vigil in Sydney's Martin Place, people prayed for Mr Chau and sang songs of hope.

Event organiser and co-member of Viet Tan Hong Vo told SBS News she empathises with Mr Chau's case as she too was detained in Vietnam in 2010.

"I understand how isolating [it can be] and the way that psychological mind games can impact a detainee ... So I am really concerned for him.

"It is still with me, even though it happened ten years [ago]."

Ms Vo was arrested at Ho Chi Minh airport in 2010 for taking part in a peaceful political demonstration about contested islands in the South China Sea.

Although she was released after ten days, she said she was subjected to intimidation and threats.

"At the time, I felt very powerless because you don't know what is happening in the outside world," she said.

"I was very lucky because it didn't last long for me but even still, it was bad enough."

Political scientist and author of the book Speaking Out in Vietnam, Benedict Kerkvliet said it should come as no surprise to Mr Chau that the Vietnamese government would come down strongly against him.

"The Viet Tan is deemed unlawful in Vietnam," he said.

"If I were him, you would almost expect this would be part of one's calculus by going to Vietnam in those circumstances."

According to Human Rights Watch, at least 131 people are behind bars in Vietnam for exercising their basic rights.

"I thought it'd be a last-ditch effort for the government to take notice ... We don't want him to be forgotten," he said.

"I was told by her office that she would get back to me but I haven't heard anything yet."

Mr Chau wife, Trang Chau said the family is also bitterly disappointed by the lack of vocal support by the Prime Minister for his case.

"We had a lot of hope, but there was no indication that he raised this case," Mrs Chau said.

"We hope the Australian government will work a bit harder as Mr Chau is now going to be put on trial in a one-party communist country."

Mr Chau has been detained in Vietnam for 8 and a half months. Source: SBS News

"We do not disclose the detail of confidential discussions between leaders."

The Department of Foreign Affairs said it would not comment on whether it is doing anything to expedite Mr Chau's case beyond providing consular assistance.

"For privacy reasons we are unable to provide further details."

The Vietnamese Ministry of Foreign Affairs was contacted for comment.