Patrick Cumaiyi has been imprisoned for three years after pleading guilty to several charges, including assaulting two officers. But records indicate he was a victim of police brutality. 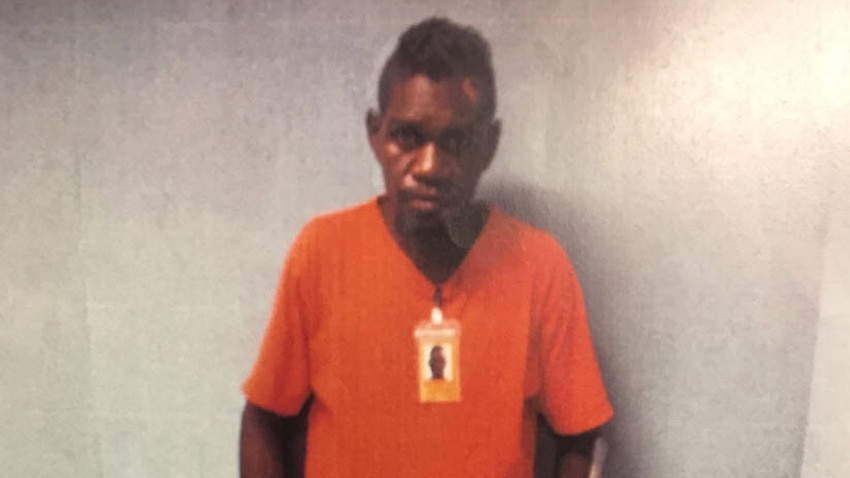 Patrick Cumaiyi was allegedly forcibly removed from a plane after being hit over the head by police with a metal flashlight. Source: The New York Times

He was being flown to Darwin, the capital of Australia’s Northern Territory, to face a domestic-violence complaint. But before takeoff, an argument broke out. An officer delivered a sharp blow to Cumaiyi’s head with a metal flashlight, according to witnesses on board, then another officer dragged Cumaiyi headfirst onto the tarmac.

In a video from the scene, about 20 people can be heard shouting in distress. “Warrundut pelpith!” — “He landed on his head!” — screams a woman in Murrinh-Patha, the native language of the 2,200 people who live in Wadeye, a tropical outpost in Australia’s far north.

“I just sat down and cried,” said Stephanie Berida, Cumaiyi’s aunt, who was present. “What could we do?”

The treatment of Cumaiyi, which left him with a fractured skull, provides a rare glimpse into an Australia that has never fully shed the dark legacies of its colonial past. Police abuse of Aboriginal Australians, including failure to provide medical care, remains a persistent problem, with nearly 150 Indigenous people dying in custody in the past decade alone.

Cumaiyi’s experience adds another troubling facet: Medical records and other documentation obtained and verified by The New York Times suggest that not only was he a victim of police brutality, but also that health officials and the police covered up the causes and severity of his injuries, while the courts nodded without question.

In places like Wadeye, this casual disregard for black lives is frighteningly common. The town, which can be reached only by boat or plane during the rainy season, is a world unto itself. Systemic racism and abuse often grow unchecked in remote hamlets like this one, where a white minority dominates the police, health care and other services for a population that is almost entirely Aboriginal.

“There is no scrutiny in places like Wadeye — they can do whatever they like,” said Marcia Langton, an anthropologist at the University of Melbourne who has worked in remote communities. “Aboriginal people are processed, and nobody pays much attention.”

Cumaiyi, 31, and described as shy by relatives, was never prosecuted for domestic violence after his arrest. Nonetheless, nearly three years later, he is still in a Darwin prison after pleading guilty to other charges, including assaulting two officers and “endangering the safety of an aircraft”.

Now, Stewart Levitt, one of Australia’s most prominent lawyers, is demanding that Cumaiyi’s case be reconsidered. He lodged a complaint Wednesday with the Australian Human Rights Commission, accusing the Australian government of human rights violations and negligence stemming from systemic racial discrimination.

Levitt said the evidence of a cover-up was clear: The official police account said nothing about the eyewitness reports that Cumaiyi was struck in the head with a flashlight and slammed onto the tarmac.

Instead, it suggests that he hurt himself the day after his arrest by jumping from a police van traveling at about 80 kilometers per hour — a claim that two medical experts dismissed as unlikely given his injuries, and that Levitt called “implausible, counterintuitive and not witnessed by anyone.”

The Northern Territory Police Force did not respond to requests for comment about the case.

Levitt, who won a large judgment last year for another Indigenous community confronting police mistreatment, said that “there seems to have been a determined effort to deflect all attention away from the police assaults.”

He added, “This is an example of the racial discrimination that’s so endemic.”

In 2008, a Ngaanyatjarra elder died of heat stroke in Western Australia after being kept for hours in a prison van where temperatures reached more than 130 degrees Fahrenheit (about 55 degrees Celsius).

In 2014, a 22-year-old Aboriginal woman who had been jailed for unpaid fines died after she suffered complications from a broken rib.

A year later, David Dungay Jr., a 26-year-old Indigenous Australian with asthma, died in a Sydney prison cell after repeatedly telling officers he could not breathe.

And last month, an Aboriginal woman, Cherdeena Wynne, 26, died in the hospital five days after she became unresponsive after being handcuffed by the police in Perth.

Read More
Two decades after her father died in police custody, a WA woman has suffered a similar fate

In all, between 2008 and 2018, 147 Indigenous people — who make up 3 per cent of Australia’s population but 27 per cent of its prison population — died while under the care of the authorities.  The deaths have continued to occur even after a royal commission running from 1987 to 1991 investigated the problem and made 339 recommendations to improve the safety of Aboriginal Australians interacting with the police.

“One of the main recommendations of the royal commission involved duty of care,” said Langton, who served on the commission. “You can see over and over again — in every case since the commission — health officers, hospital staff, police, they don’t abide by the principle of duty of care. They just process people.”

Especially in places like Wadeye (pronounced wad-air), scholars say, Australia’s colonial past cannot be separated from its present. The town, about 400 kilometres from Darwin, has been a tribal meeting place for thousands of years. But it is also a mission town where in 1935 a Catholic priest gathered 20 different clans to be “civilised”.

More recently, the government’s presence in Wadeye has tended to float in and out. Government housing is in short supply. There often is no full-time doctor. The town’s 13 police officers typically stay for two years, then move on.

“For the people flying in, what often gets set in place is an ‘us versus them’ mentality,” said Sean Bowden, a lawyer in Darwin who represented the town in litigation that forced a change to a discriminatory school-funding formula.

Tensions among clans and between residents and the police have often boiled over. In 2004, a police officer fatally shot an Aboriginal teenager in Wadeye; in 2017, an officer fired warning shots after being confronted by residents.

Cumaiyi’s own run-in with the police came a few months earlier.

Based on his investigation, Levitt said the altercation on the plane on 9 November, 2016, started when Cumaiyi asked for his wrist restraints to be loosened. An officer refused, leading to an argument.

Two prisoners who were on the plane with Cumaiyi, Levitt said, insisted in separate interviews that a police officer hit him with a 2-foot (60cm) metal flashlight.

The official paper trail begins immediately after Cumaiyi — who stood 1.77-metres tall and weighed 61 kilos — was dragged off the plane and taken to the Wadeye Health Clinic. A nurse’s report states that he had been “tackled twice” and “subdued with punches to the head and body”.

It noted several injuries, including “swelling to the left temporal lobe”.

But Cumaiyi was not referred to a doctor, violating protocols for head injuries and potentially risking death. Instead, he spent the night in a cell. By the time he reached Darwin the following afternoon, a new story had emerged.

A referral letter sent to Royal Darwin Hospital points to a separate incident from that morning, on 10 November — “escaping from top of vehicle as it was traveling approximately 80kms per hour”.

The police asserted in court that, as they tried to drive Cumaiyi to Darwin, he kicked the roof of the van twice before jumping out. The referral letter lists his injuries as “trauma to left ear, superficial abrasions to left skull, left elbow and both knees”.

Dr Timothy Peltz, a reconstructive plastic surgeon in Sydney, said it was “rather comical” to expect only “superficial abrasions” from a fall at highway speeds. Dr John Crozier, a trauma surgeon, said that “a fatal outcome would not be uncommon, with a high likelihood of multiple fractures.”

One of Cumaiyi’s aunts, Christine Cumaiyi, said he had told her “it was a setup”.

Adding doubt to the police account, a CT scan performed at the Darwin hospital found a left temporal bone fracture and damage to Cumaiyi’s ribs — injuries consistent with those reported by the nurse the day of his arrest.

No new injuries, which would be expected if he had jumped out of a moving vehicle a day later were identified.

“He was such a happy boy,” said his mother, Assumpta Gumbaduck, recalling a time when Cumaiyi enjoyed music and dancing. “Until this.”

By Damien Cave and Brook Mitchell © 2019 The New York Times