Sydney has already recorded some of the worst air pollution the city has seen, as bushfires burn around the city, with conditions to persist into the weekend. 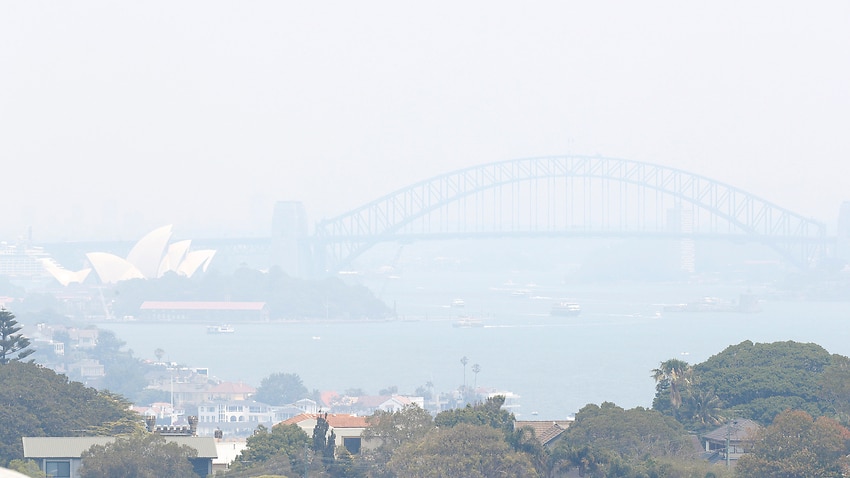 The "longest period" of air pollution on record for NSW is set to continue with severe bushfire conditions across large chunks of the state.

The Bureau of Meteorology says heavy smoke billowing from bushfires surrounding Sydney will linger in the city basin until Saturday.

Poor air quality has again been forecast for Sydney after hazardous levels of pollution were recorded in the east and southwest of the city on Wednesday.

Some Sydney-siders are wearing face masks to help cope with the smoke. Source: AAP

Heavy smoke has been blowing into the city from a large fire near Warragamba Dam near the Blue Mountains, the NSW Rural Fire Service says.

"An overnight temperature inversion will trap the smoke in the Sydney basin. This means smoke will settle in many areas and be very heavy," the RFS said in a statement.

The NSW environment department says this season's bushfire emergency has caused "some of the highest air pollution ever seen in NSW".

"Recently NSW has experienced elevated levels of pollutants as a result of smoke from the bushfire emergency, and dust caused by the severe drought," a spokesman said.

"NSW has experienced other periods of poor air quality that lasted several weeks, including the 1994 Sydney bushfires and the Black Christmas bushfires of December 2001 to January 2002.

"This event, however, is the longest and the most widespread in our records."

The NSW Rural Fire service has issued widespread total fire bans for Thursday, with hot and windy conditions expected to worsen across the state.