Syria's army and allied fighters have retaken the city of Deir Ezzor from the Islamic State group in a Russian-backed operation, a monitor said on Thursday.

There was no immediate confirmation from official sources, though state media earlier reported army advances in the city in the country's east.

The recapture would mean IS has lost the last of the major cities it once held, after a string of defeats elsewhere in Syria and neighbouring Iraq.

The jihadist group was last month driven from its one-time de facto Syrian capital Raqa, a highly symbolic blow that illustrated the way its self-proclaimed "caliphate" is crumbling.

"Regime forces and allied fighters... with Russian air support have full control of Deir Ezzor city," said the Syrian Observatory for Human Rights, a Britain-based war monitor which relies on a network of sources inside Syria for its information. There was no confirmation on Syria's state media, which had earlier reported that the army had recaptured three neighbourhoods from IS and "tightened the siege" on the jihadists remaining in the city.

State news agency SANA said IS fighters were using loudspeakers to urge remaining members of the group "not to run away from the fighting, and to kill any member who tried to escape or surrender".

Hours earlier, a military source had said the government only held around 80 percent of the city.

"Daesh is scrambling to defend its last positions, which the army is continuing to advance on until they are eliminated completely," the source said, using the Arabic acronym for IS.

He added that the jihadists were using vehicle bombs and snipers, and alleged they were "sending female suicide bombers" to target army positions.

But the Observatory said government troops and allied fighters had advanced swiftly in a final push backed by heavy Russian air strikes. 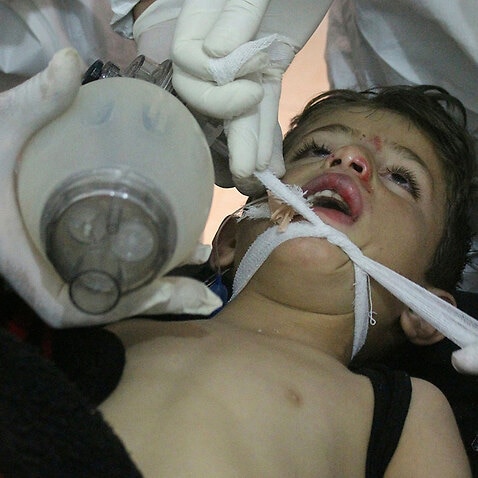 Moscow is a close ally of Syria's President Bashar al-Assad and launched a military intervention in support of his government in September 2015.

IS once held large sections of Deir Ezzor city, and for nearly three years laid siege to other parts of it that remained under government control.

In September, Syria government troops finally entered the city, breaking the siege, and they have been battling since to restore control of the rest of it.

On the ground in the city on Thursday, a journalist contributing to AFP saw widespread destruction in neighbourhoods recently recaptured by the army.

Entire floors of buildings had crashed onto those beneath, while facades were completely blown away on others, revealing empty, destroyed interiors.

Trenches dug by IS fighters were still visible, as were army minesweepers working to locate and defuse explosives laid by the jihadists.

On the outskirts of remaining IS-held territory, soldiers fired from tanks.

A warplane roared overhead and carried out a strike that sent a large cloud of grey smoke above the city's skyline of damaged buildings.

A local source said between 150-200 civilian families were estimated to remain in areas held by IS in the city.

The military source said operations were slowed at times to allow searches for civilians and their evacuation.

Oil-rich Deir Ezzor province was once an IS stronghold, but the jihadist group is facing twin assaults there, from the regime and the US-backed Kurdish-Arab Syrian Democratic Forces.

The jihadists have already been expelled from neighbouring Raqa province, and are now confined to just a few pockets of territory in Deir Ezzor.

Their remaining positions are mostly along the border between Syria and Iraq, including the border town of Albu Kamal inside Syria.

More than 330,000 people have been killed in Syria since the conflict began in March 2011 with anti-government protests, before spiralling into a complex, multi-front war that drew in international forces and jihadists.