Observers have expressed serious concerns about the fairness of the election in the run up to voting day, and violence erupted in semi-autonomous Zanzibar on the eve of the poll. 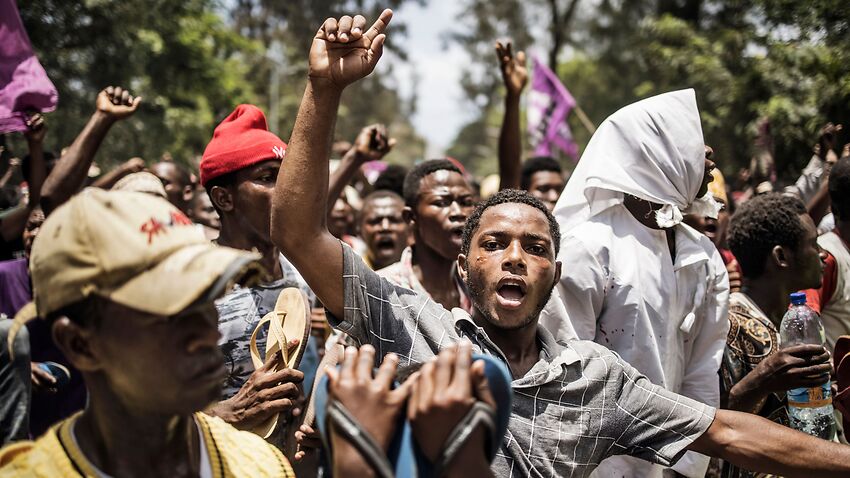 Tanzanian opposition presidential candidate Tundu Lissu has slammed "widespread irregularities" in an election which comes after years of repression under President John Magufuli, who is seeking a second term in office.

Long deemed a haven of stability in East Africa, observers say Tanzania has seen the stifling of democracy and a crackdown on freedom of speech under the 60-year-old Mr Magufuli and his Chama Cha Mapinduzi (CCM) party, which has been in power since 1961.

Observers expressed serious concerns about the fairness of the election in the run up to voting day, and violence erupted in semi-autonomous Zanzibar on the eve of the poll, leaving 10 dead according to the opposition.

Voting reports indicate widespread irregularities in the form of preventing our polling agents from accessing polling stations. Stuffed ballot boxes seized in Kawe, Dar. If this continues, mass democratic action will be the only option to protect the integrity of the election.

"Voting reports indicate widespread irregularities in the form of preventing our polling agents from accessing polling stations," Mr Lissu said on Twitter, alleging ballot boxes had been stuffed in some locations.

"If this continues, mass democratic action will be the only option to protect the integrity of the election."

Major social media networks - such as WhatsApp and Twitter - have been blocked across Tanzania, and were only accessible through virtual private networks (VPN).

In a polling station in Dodoma, voter Jackson Daudi said: "I hope voting will go smoothly and the electoral body will be fair to all candidates. I believe justice will prevail."

And in the northern town of Moshi, near Africa's highest peak of Kilimanjaro, Nestor Shoo urged the electoral commission to show "impartiality, so that there can be peace".

In Zanzibar hundreds of men and women formed separate queues from before dawn in Garagara neighbourhood outside the capital Stone Town, where on Tuesday police fired teargas, live rounds and beat up civilians.

Mnao Haji, 48, queueing to vote in Garagara, said she hoped the election "will be peaceful" on the archipelago despite a history of contested polls.

"During the clashes with police teargas fell inside my house. I screamed, crying, I was helpless," she said as heavily armed officers and soldiers looked on.

The reports of violence and detentions in #Tanzania are alarming and deeply distressing. I wish strength for Amujae Leader and MP @UpendoPeneza in the face of growing threats, and I stand in solidarity with all Tanzanians calling for a free, fair, and peaceful election.

On Zanzibar, streets already devoid of tourists due to the coronavirus pandemic were deserted after a day which saw police cracking down on residents, while the second island of Pemba where the opposition said nine were killed by police on Monday night was reportedly calm on voting day.

Zanzibar citizens vote for their own president and lawmakers, as well as for the Tanzanian president, and the opposition has accused the ruling party of trying to steal the vote - an accusation it makes at every election. Foreign observers have often agreed.

Mr Magufuli, whose campaign against corruption and wasteful spending initially drew him praise, voted in Dodoma, urging people to turn out to vote.

"We also need to maintain our peace and I always say there is life after elections," he declared in the Tanzanian capital.

Despite his initial popularity, Mr Magufuli's flouting of due process and intolerance of dissent has sparked alarm among rights groups and foreign allies.

In the past five years a series of tough media laws have been passed, arrests of journalists and activists have soared and several opposition members were killed.

Mr Magufuli touts as his successes the expansion of free education, rural electrification and massive infrastructure projects such as railways, a hydropower dam and the revival of the national airline.

He returned to the country in July after three years abroad recovering from 16 bullet wounds sustained in what he believes was a politically-motivated assassination attempt.

Mr Lissu's return has reinvigorated an opposition demoralised by a ban on political rallies outside of election time, multiple arrests and attacks.

In a boost for the opposition, Zitto Kabwe, head of the popular ACT-Wazalendo party, has endorsed Mr Lissu for the presidency on the mainland.

In return, Chadema is backing veteran opposition candidate Seif Sharif Hamad in his sixth bid for the presidency in Zanzibar, this time against CCM candidate Hussein Ali Hassan Mwinyi.

"I feel proud that I have managed to vote this year," said Mr Hamad after casting his ballot and slamming the election as a "farce" following his  detention for several hours Tuesday.

The election campaign has taken place with little regard for the coronavirus pandemic.

Tanzania stopped giving out official data on infections in April and Mr Magufuli has declared the country COVID-free, which he attributes to the power of prayer.

On the mainland, just over 29 million registered voters will cast their ballots, while some 566,000 will vote in Zanzibar.