A man in Melbourne's southeast was injured during Wednesday's record earthquake, as Victorian authorities confirm the state has now had 10 aftershocks. 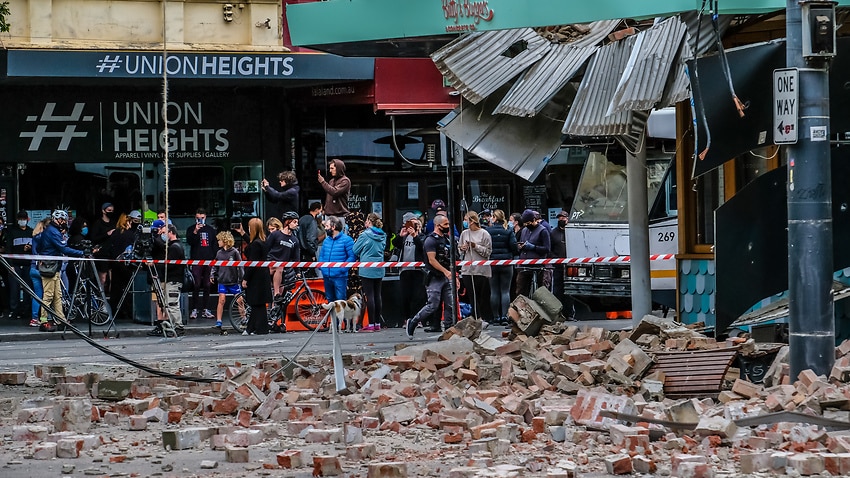 A man was injured while performing building work during Victoria's largest earthquake in history, with the state since experiencing smaller 10 aftershocks.

The magnitude 5.9 quake hit about 9.15am on Wednesday, with the epicentre between Mansfield and Rawson in the state's northeast.

The 10km deep earthquake - the biggest in the state since records began - was felt across Melbourne and as far away as Canberra, Sydney and Adelaide.

Initially, there were no reports of injuries, however State Emergency Service chief officer Tim Wiebusch said on Thursday a man in Mount Eliza suffered minor injuries.

"A man that was working on a repair of a construction and that, in the shaking, moved and came on top of him," he told the Seven Network.

Prime Minister Scott Morrison said he's relieved the earthquake did not cause much damage.

"Obviously, we need to remain cautious because of the threat of aftershocks, but it's pleasing to know that what was first feared was not realised, particularly in relation to any reports of serious injury," he told reporters in Washington.

The SES has told AAP a 10th aftershock - of 2.8 magnitude - was recorded just after midday on Thursday, according to Geoscience Australia. It was 10 kilometres deep with the epicentre again near Rawson.

A woman taking photos of the damage caused by an earthquake in Melbourne during the aftermath. Source: Sipa USA Alexander Bogatyrev / SOPA Image

The highest magnitude aftershock so far has registered 4.1 on the Richter scale, and further tremors are expected in the coming days, possibly months.

"We are asking people to know what to do: drop, cover and hold is the key message," Mr Wiebusch said.

There were more than 100 calls for assistance after the initial earthquake, 55 of those in metropolitan Melbourne.

Most were for minor structural damage to chimneys, facades and older buildings.

Mr Wiebusch urged anyone who discovers building damage to contact a licensed builder or technician, with emergency repairs still allowed under COVID-19 restrictions.

Some building damage has emerged in metropolitan Melbourne and areas near Mansfield, with Beechworth hospital losing power and one of the crosses at St Patrick's Church in Wangaratta falling down.

Among the city structures damaged was the facade of a Brunswick Street building in Fitzroy and the exterior of Betty's Burgers on Chapel Street in Windsor.

No one was inside the restaurant when the earthquake hit, and managing director Troy McDonagh told AAP he expects the business won't be able to reopen for months.

The earthquake was originally recorded as a magnitude six, but later revised to 5.8 and then 5.9 on the Richter scale.