Thousands of protesters have marched in Washington as rallies across the US to protest the killing of an African-American man in Minneapolis police custody enter a 12th day.

Tens of thousands of peaceful protesters rallied for racial justice Saturday in cities across the US following the death of George Floyd, as the movement triggered by his killing at police hands entered a second weekend.

Protests stretched from New York to Los Angeles but Washington was at the action's centre, as thousands of people flooded downtown streets surrounding the White House, which was barricaded with black metal grates.

"This fight has been happening for many, many decades, hundreds of years, and at this point it's time for a change, it's time to make the future brighter," said Washington native Christine Montgomery, the mother of a 10-year-old boy.

"I'm here so my son is not the next hashtag that is circulating worldwide." 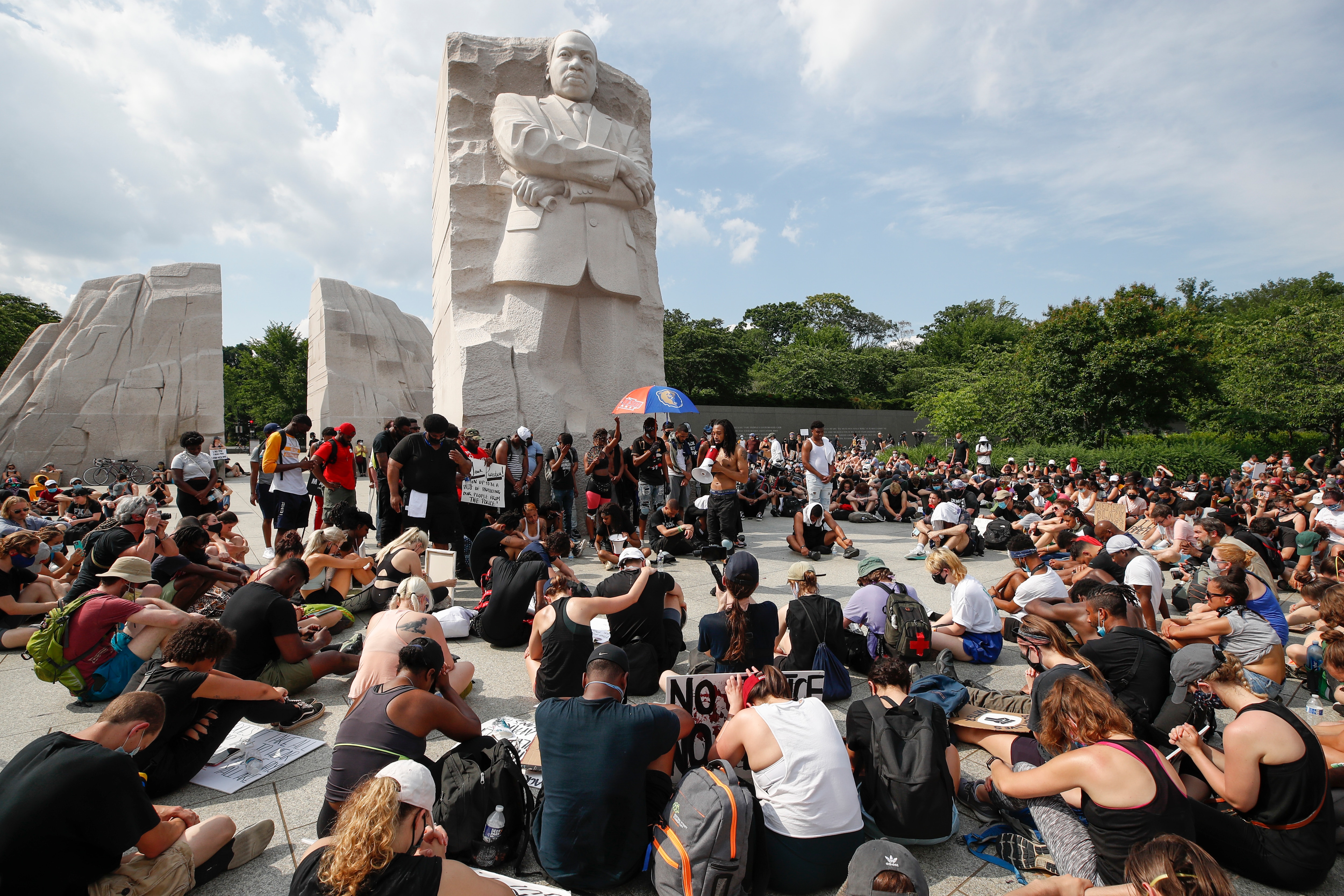 Some protesters attached pictures of Mr Floyd and other African-Americans killed by police to the tall barrier surrounding the White House.

On a sunny but oppressively hot day, many people wore masks because of the coronavirus pandemic. Volunteers handed out water and other supplies as the area took on a block party vibe, with food trucks and vendors selling Black Lives Matter T-shirts.

Military personnel watched over the gathering and helicopters circled overhead as some protesters danced while others yelled, "This ain't no party!" 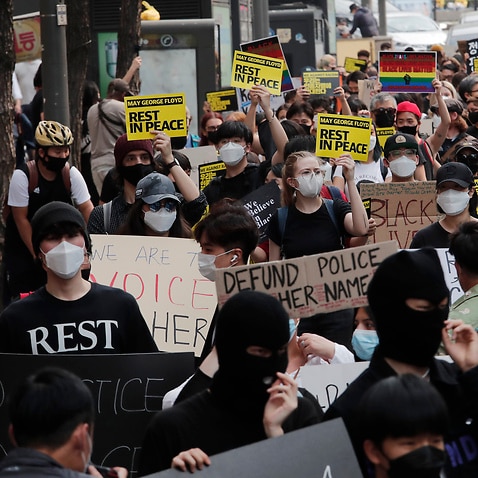 On the National Mall, fencing and uniformed guards blocked protesters from the steps of the Lincoln Memorial where civil rights icon Martin Luther King Jr famously delivered his "I have a dream" speech in 1963, pleading for an end to racism in the US.

"As African-Americans we are here to bring a message of our hope, saying this vicious system will not define us," said Deniece Laurent-Mantey, 31, who was among the large crowd there.

"Martin Luther King stood here, and after so many years we are back here with a new message of hope," she added. 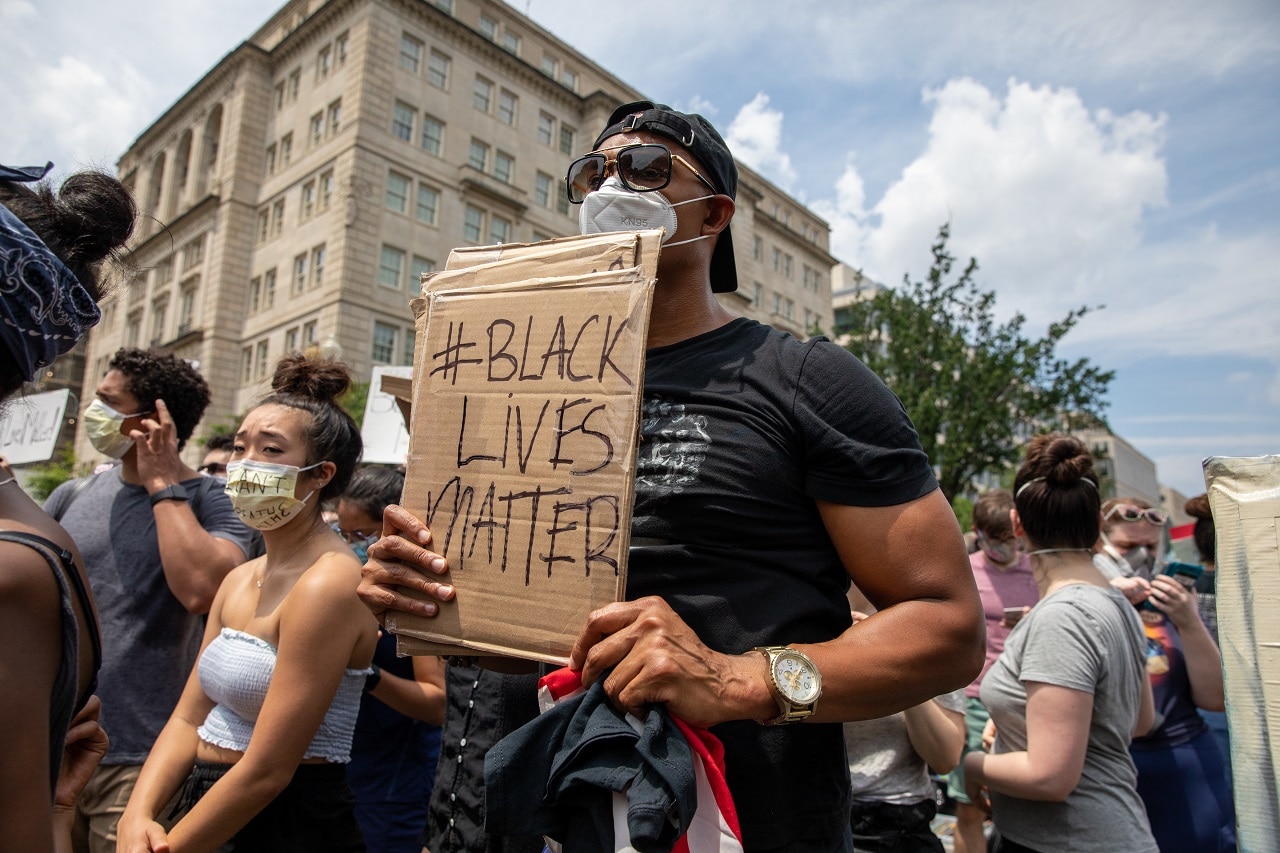 Thousands have gathered in Washington.
Getty

The protests were sparked by videos of a police officer kneeling on Mr Floyd's neck for almost nine minutes as he pleaded for his life - the latest case of white law enforcement authorities being blamed for the death of an unarmed black person.

The rage since Mr Floyd's death in Minneapolis on 25 May has exploded into the most serious civil unrest in America since Mr King was assassinated in 1968.

But the demonstrations in Washington were expected to be the biggest since protests began nine days ago in Minneapolis before spreading across the country and then abroad.

"Today, the pain is so raw it can be hard to keep faith that justice is at hand or that we will ever achieve the more perfect union we all want," tweeted Democratic presidential hopeful Joe Biden.

"But ours is a union worth fighting for, and we are all called to the cause. No one can stay silent."

Today, the pain is so raw it can be hard to keep faith that justice is at hand or that we will ever achieve the more perfect union we all want. But ours is a union worth fighting for, and we are all called to the cause.

No one can stay silent. https://t.co/nZjQdJGKbD

A remembrance for Mr Floyd was held Saturday in Raeford, North Carolina, the state where he was born, following a memorial service in Minneapolis on Thursday.

Hundreds waited in line to view Mr Floyd's coffin, some holding umbrellas to ward off the hot sun, news reports said. Some sobbed and many held cell phones high as a hearse arrived with the casket.

Patricia Thompson, a 55-year-old African American outside the White House with her niece and nephew, said she hoped this was a turning point in US history.

White protester Megan Nadolski came to the rally with her husband and two young daughters to show solidarity.

When African-American protesters called out the first part of a chant, she said "I just thought to myself, I always want to be a white person standing right next to them to answer, just make sure they know that they're safe, that their children can grow up safe and healthy and have the same opportunities my children do." 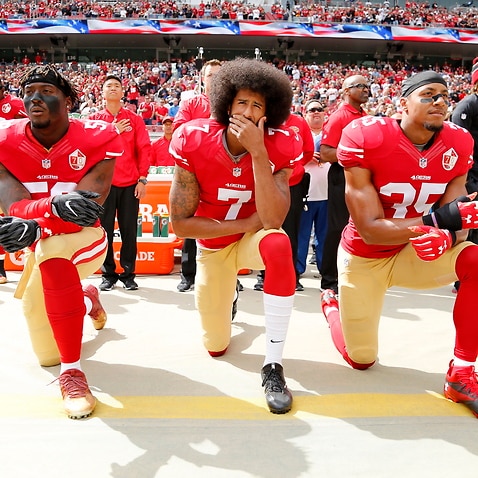 On Friday, Mayor Muriel Bowser of Washington - who has clashed with President Donald Trump over his hardline handling of the unrest - unveiled a street mural reading "Black Lives Matter" in giant yellow letters on the road leading directly to the presidential mansion.

Around the world, protesters echoed the rage of American demonstrators.

"It is time to burn down institutional racism," one speaker shouted through a megaphone at a hooting crowd of thousands outside the parliament building in London. Tens of thousands rallied in Australia and France, while in Tunis, hundreds chanted: "We want justice! We want to breathe!"

The days of demonstrations in the US - which have included outbreaks of looting and violence - have seen new police abuses, some captured on camera. In Buffalo, New York, two policemen were charged with felony assault Saturday after they were filmed shoving a 75-year-old protester who fell, hit his head and began bleeding from the ear.

In Indianapolis, police launched an investigation after a video emerged showing at least four officers hitting a woman with batons and firing pepper balls at her last week.

But there were some changes as well. In Seattle, the mayor and police chief announced a temporary ban on the use of tear gas. In Denver, a federal judge forbade the use of chemical agents and projectiles like rubber bullets against peaceful protesters. And in Dallas, scores of police marched in solidarity with protesters.

The unrest has handed Mr Trump one of the greatest challenges of his tumultuous presidency.

While condemning Mr Floyd's death, he has adopted a tough stance toward protesters, calling them "thugs" or "terrorists" and threatening a military crackdown.

"LAW & ORDER!" the president tweeted as evening fell Saturday, adding later that the crowd in DC was "much smaller" than anticipated.

Much smaller crowd in D.C. than anticipated. National Guard, Secret Service, and D.C. Police have been doing a fantastic job. Thank you!

US civil rights groups filed a lawsuit against Mr Trump after security forces fired pepper balls and smoke bombs to clear peaceful demonstrators in Washington before the president walked to a nearby church for a photo op earlier this week.

While some of the early protests were marred by rioting and looting, most have been peaceful since then.