Parts of the Thai diaspora in Australia are lending their support to the student-led protests back home. But as the months-long demonstrations show little signs of abating, a generational gap in how they're being viewed has been forming.

A youthful would-be revolution is underway in Thailand.

A new student-led protest movement, the biggest in years, began in July, calling for deep constitutional reform to the monarchy and the removal of Prime Minister Prayuth Chan-ocha, a former general who seized power in a 2014 coup.

Tuesday saw the most violent confrontations yet, with police using tear gas and water cannons on demonstrators, some of whom also clashed with royalists near parliament.

Here in Australia, while the demonstrations are smaller, parts of the Thai diaspora are determined to make their voices just as loud.

Kanyanatt Kalfagiannis moved to Sydney from Thailand a year ago. She says the protests back home have been difficult to watch.

“At first, we felt powerless that we can't do anything… and then we wanted to try to help in any way we could to help Thailand."

Kanyanatt has started an Australia-wide movement that stands in solidarity with the Thai students. Called the Australian Alliance for Thai democracy, it has made its way to Canberra for demonstrations at the Thai embassy and at Parliament House. But despite the significant distance from home, any sort of challenge to the monarchy - which is so revered in Thailand its lèse-majesté laws make it illegal to criticise it - can still bring serious consequences.

“I know that if I am protesting in front of the royal embassy in Canberra I might be banned from coming back to my own country,” Kanyanatt said.

“But I am willing to do so if it would help the protesters in Thailand.”

'The King means everything'

But Kanyanatt's perspective is only half the story.

Hkai Hillam has lived in Australia for 40 years and says her loyalty to Thailand and King Maha Vajiralongkorn is as strong as ever.

“The King means everything for Thai people,” she said.

“He's the one who [brings] Thai people together. The King has been doing such good work for the country, helping all the people." Hkai Hillam says the King "means everything" to the Thai people.
SBS News

She said people who did not grow up in a country with a king or monarchy would not understand their significance.

“[The King] is a father to us. The Queen is like a mother.  We are the children. We are attached and Thai people love him.”

Last week, thousands of protesters turned their backs on the King’s motorcade as it passed through central Bangkok and gave a three-fingered salute.

When the King arrived at a ceremony to open a new railway line in the west of the city, he was greeted with a show of support, telling well-wishers of the importance of unity. In response to the anti-monarchy protests, pro-royalist demonstrations have been growing.

The Royal Palace has not commented since the start of the protests, but the King has said in recent weeks the protesters were still loved and that Thailand was a land of compromise. Thai King Maha Vajiralongkorn accompanied by Queen Suthida after attending the opening of a station in Bangkok, Thailand on November 14
Yomiuri Shimbun

Hkai said she did not mind the fact that there were protests happening in Thailand, but condemned some demonstrators for violent conduct and being reckless by gathering in large numbers during a pandemic.

“The protests, we don’t mind. Thailand is a democracy ... [but] they have to do things according to the rules,” she said.

The King sits at the apex of Thai power, supported by an arch-royalist military and the kingdom's billionaire clans.

The ultra-wealthy monarch spends much of his time in Europe, but he has remained in Bangkok for the past few weeks.

With many young people supporting the protesters and older Thais backing the monarchy, a generational gap in how the protests are viewed has been forming.

The royal family enjoys support from mostly older conservatives and Thailand's monarchy is protected by one of the world's toughest royal defamation laws.

Twenty-six-year-old Tone Buadsantia, who supports the student protesters, will chalk up six years in Australia in 2021.

He says his family in Thailand has different perspectives on the protests.

“Some of my family has different opinions - some disagree and some agree," he said. He said growing up with the internet and more technology has led to many younger people questioning the monarchy.

"In our generation, there are so many channels we can find news and information compared to the older generations," he said.

“In the past [things] have been told one-sided. The older generations … feel without the monarchy they [feel they are] no longer a human being," she said.

"The younger generations have grown up with fresh minds ... and the internet era has disrupted everything."

The protesters have been accused of wanting the abolition of the monarchy, which they deny.

"We still would like to have a royal family. We totally respect them, but what we need is some change," Tone said. 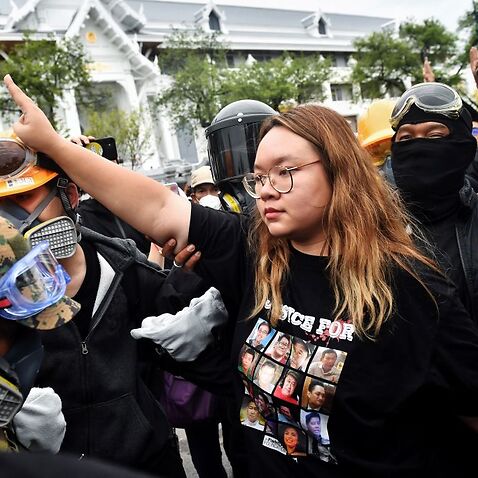 Thai MPs have been discussing various proposals for constitutional change, which mostly exclude any reform to the monarchy.

But any constitutional change is expected to take a long time and the junta-appointed Senate is unlikely to vote itself out of power.

"People in our generation want to see change. We really believe that we can change the country and if the government listens to us, we can find the proper direction to improve our country together," Tone said.

"I really want both sides to come and talk to each other."

Additional reporting by Reuters and AFP.