Findings from the largest snapshot of racism and prejudice in the country have revealed some uncomfortable truths.

The lead researcher behind the Challenging Racism Project says the one in 10 Australians who self-identify as racist are "deserving of serious attention".

The study, undertaken by Western Sydney University and commissioned by SBS, surveyed 6001 participants largely representative of the Australian population and asked respondents whether they were prejudiced against other cultures.

The question was designed as an indicator to test the sample's preparedness to self-diagnose their own racism - of which 11 per cent did - however there were nuances within the group. "This 11 per cent of respondents who self-identified as racist are a 'hard-core' group of racists who are deserving of serious attention," the report stated.

"Whenever they imagine that their views are majority views, or a consensus view, they are all the more emboldened to actually act on those attitudes; to do racist things, to say racist things, to be prejudicial," Professor Dunn said.

"We’ve got to make it very clear to people that this is not the majority or consensus view, because if they believe those views are the consensus of the majority, then they will do hurtful things."

Of the sample, 76 per cent of respondents who participated in the survey said they would intervene if they were to witness discriminatory behaviour.

However, these figures put the university's findings at odds with the Scanlon Foundation's most recent social cohesion survey which indicated experiences of discrimination in Australia were at their highest in a decade.

Of the foundation's sample, 20 per cent said they had been discriminated against on the basis of their skin colour, ethnic origin or religion, up from 15 per cent the previous year.

The Challenging Racism Project put that figure higher again, with 33 per cent of participants stating they had experienced racism in the past year.

Professor Dunn said the three main factors people did not intervene were fear of becoming the target of the abuse, an uncertainty as to whether what they are witnessing is racist or not and not knowing what to do.

A fear of jeopardising group status was also a consideration for younger people.

"If it is a person who is a target of racism in a public realm, and bystanders don’t take action, well, it’s like they’re sending you a message about your level of citizenship, the extent to which they see you as someone worth protecting," he said.

"Conversely, if people speak up and speak out, we’ve found from our research that the affirmative effects of people treating you as a fellow citizen and backing you up are so great they can almost [nullify] the negative effects of the racism itself."

"We’ve got to get past binary thinking that suggests that reactions of individuals can’t have structural effects," he said.

"There’s a massive untapped resource out there which is the bulk standard - the everyday Australian ... that's a big resource that's out there.

"You don’t have to take on or face up to an aggressive situation - there are ways to record and report, to show empathy with the target - all sorts of things that can be done that might not necessarily put you in danger."

Targets of racial attacks can also pursue legal action under Section 18C of the Racial Discimination Act - legislation that in late February was the subject of a parliamentary inquiry.

The inquiry made no formal proposals to amend the section of the act that makes it unlawful to "offend, insult or intimidate" on the basis of race, a decision welcomed by Race Discrimination Commissioner Dr Tim Soutphommasane. 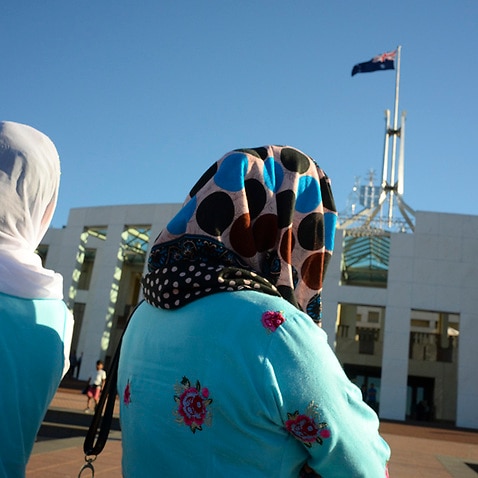 "It causes immense anxiety for many to be having this debate when the times are so challenging for race relations," he said.

"While there is never a time when our parliament should encourage people to believe that racial vilification can be acceptable, now would be an especially dangerous time to be doing so."

Dr Soutphommasane also outlined the importance of civic responsibility when it came to putting an end to racism.

"We can only hope that our society will remain committed to racial tolerance, non-discrimination and equality," he said.

“Racism is the attitudes and actions that give rise to unnecessary and avoidable inequality and resources across ethnicity, race, culture and religion and when we see that ever... we need to call that for what it is - it’s racism and we need to speak up and speak out." he said.