Yemen is a land of displacement with 80 per cent of the population reliant on humanitarian aid.

Despite six years of war and hardship in Yemen, Somali refugee Bader Hassan had stuck it out hoping for a better life than in his homeland.

But the coronavirus pandemic has pushed his precarious existence to the edge, and now he wants out.

"Me, my wife and my son want to live in a good place, like other people," the Somali-born 32-year-old said in the capital Sanaa.

As a refugee he has lived his life in Yemen with no state or charity support, he said. He dropped out of school early to earn a living and now washes cars in the street. Congo president's aide jailed for 20 years after embezzling $A70 million

"But how do we live now when corona is also shutting off car washing?" he said.

Divided between Houthi authorities in the north and the Yemeni government in the south, Yemen today is a land of displacement with 80 per cent of the population reliant on humanitarian aid.

One in every eight Yemenis has been internally displaced by the six-year conflict and 280,000 foreign refugees also live there. Yemen hosts the second-largest Somali refugee population. Children walk past tents at a displaced persons camp in the Khokha district of Yemen's western province of Hodeida.
AFP

After Houthi authorities in May announced their first coronavirus case in a Somali national found dead in a Sanaa hotel, African migrants and refugees have been increasingly stigmatised, the United Nations and migrants said.

Tensions between host and refugee and migrant communities over Yemen's scarce resources have historically been low, but the relationship is coming under strain as Yemen's woes deepen, the UN refugee agency's (UNHCR) Jean-Nicolas Beuze said from Sanaa.

Alongside refugees, around 100,000 migrants also arrive each year by sea from the Horn of Africa hoping to trek north into wealthy Saudi Arabia and beyond.

Largely Ethiopian, they suffer the same traffickers, abuse, rape and theft as refugees, often living side-by-side in squatter camps in the main cities. 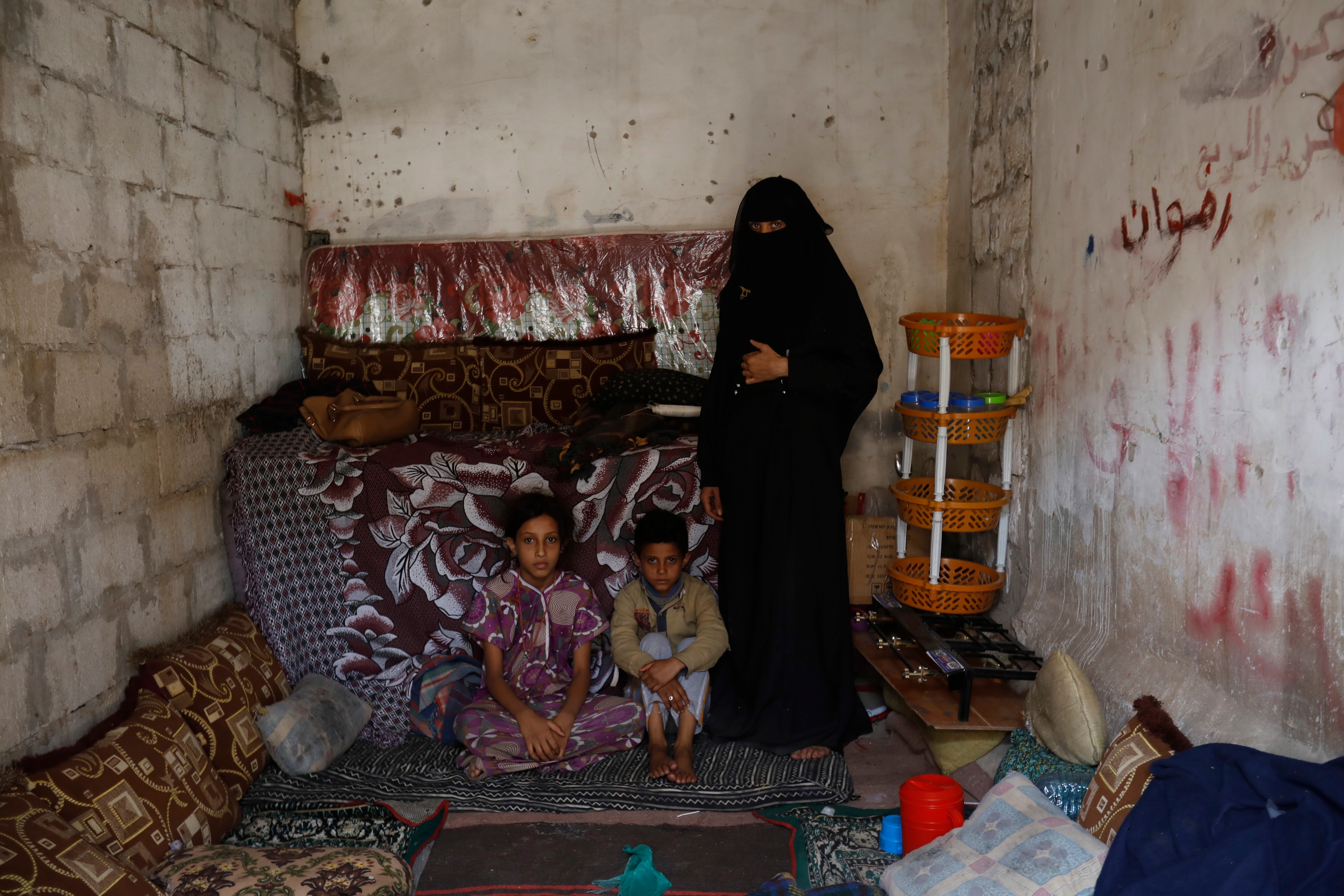 Conflict-affected members of a Yemeni family inside a one-room rental house, in Sanaa, Yemen.
EPA

"When [migrants and refugees] reach the UNHCR office or our partners they are often without anything, not even identity documents most of the time," said Mr Beuze.

As coronavirus concerns mount, UN migration agency IOM says migrants are being forcibly transferred out of urban areas to hard-to-access locations, including more than 1,300 forcibly moved north to south since late April.

Ethiopian migrant Abdelaziz came by sea, but said his journey to Saudi was blocked by northern authorities.

"There were 250 of us on the sea journey we paid 1,500 Saudi riyals ($A585) for. Around five died," he said from the bare roadside garden where he and dozens of other African migrants sleep on cardboard.

He desperately wants to leave.

"We have nothing to eat and drink," he said. "The people are tired of helping us."