Last year, Badiucao had his exhibition in Hong Kong cancelled. Now, his art is plastered all over the city and being shared around the world. 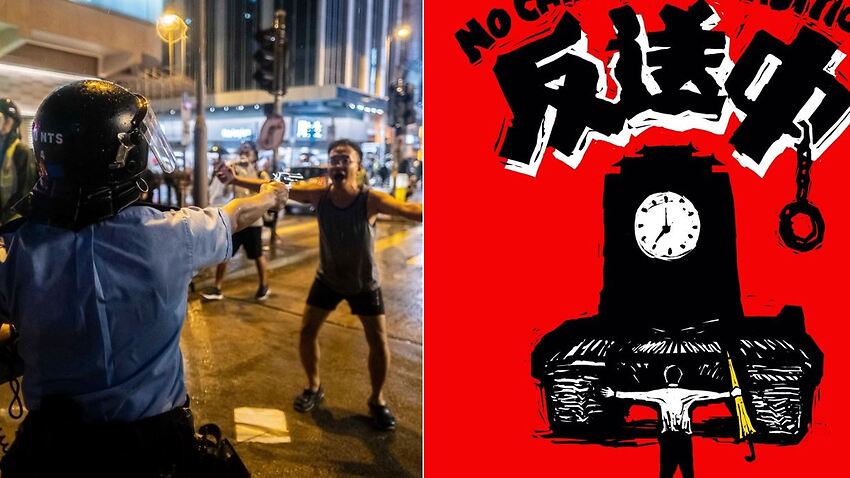 Badiucao depicts moments from the Hong Kong protests and posts them on his social media pages. Source: Badiucao/Twitter

A bloody eye. A yellow raincoat. A fallen lamp post.

After nearly three months of ongoing unrest, some iconic images have emerged from the Hong Kong protests.

And for Melbourne-based artist Badiucao, there is no shortage of inspiration.

“I’ve never seen things move so fast, and as an artist, I can’t help but draw and respond to what happens,” he told SBS News.

A Badiucao posters is displayed in Hong Kong. Source: AFP

The artist's rapid turnaround of what is happening on the streets of Hong Kong sees him posting work on his social media accounts at least daily, and has been earning him thousands of followers.

“I see it as using visual language to introduce the protests to the world. Visual language can overcome the barriers, for the public who may not necessarily understand Mandarin and Cantonese,” he said.

In early August, a young woman with a bleeding eye became a symbol of what protesters said was police brutality. They claimed she had been shot in the eye by a beanbag round, but police said they needed to investigate further.

Images of the young woman with a bleeding right eye were circulated among protesters.

In subsequent protests, many demonstrators donned eye patches - their anger enshrined in a Badiucao caricature of Hong Kong's Chief Executive Carrie Lam. The text beneath reads: an eye for an eye.

Protesters have printed out Badiucao’s artwork and brought copies with them to demonstrations.

"I receive a lot of comments from Hong Kongers. Art has a role in healing the society," Badiucao said.

Local media have since reported the woman has not lost sight in her right eye.

A Badiucao artwork featuring Hong Kong Chief Executive Carrie Lam and the caption: an eye for an eye. Source: LightRocket

The Chinese-Australian artist said he feels a sense of solidarity and “personal destiny” with the Hong Kong protesters.

In late 2018, he was due to host his first international art exhibition in Hong Kong, in collaboration with Reporters Without Borders, Amnesty International and Hong Kong Free Press, a not-for-profit local news outlet.

But organisers said they were forced to cancel the event, due to threats made by Chinese authorities against the artist.

“When the show was cancelled, my opportunity to show my artwork was taken away. To see my artwork during the protests, I am honoured,” he said.

“The whole city is now like a giant gallery. No artist could ask for more than that.”

Ms Lam is often the subject of Badiucao's artwork. Many of the protesters have been calling for her resignation, accusing her of ignoring their movement.

As unrest in Hong Kong continues, several days at a time have gone by without her making a public appearance - only then for her to attend an official government function.

One such moment was at the ceremony for the 22nd anniversary of Hong Kong's return to Chinese rule in July - before that, Ms Lam had not been seen for more than 10 days, despite the escalating disturbances on the streets.

Carrie Lam's appearance at the handover ceremony was the first time she had been seen in public after an absence of more than 10 days. Source: Badiucao/ Getty Images

The 1 July anniversary of the handover is always controversial for some - each year, there are pro-democracy marches to mark the occasion.

But this year, with hundreds of thousands on the streets engaged in a heated protest over what they call Beijing's meddling in Hong Kong, and their city's sliding freedoms as a result, many felt it was inappropriate for Ms Lam to raise a glass of champagne in celebration of the date.

Badiucao's cartoon represents her as faceless - recognisable only by her signature glasses and cropped haircut - raising a glass, as she stands in a pool of blood.

Many of Badiucao's images make use of popular culture - including Winnie the Pooh, the children's book character who became an unlikely target of Chinese government censors after some likened his appearance to China's President Xi Jinping.

"I don't shy away from memes - when you bundle sensitive messages with memes, it creates a dilemma for censors," Badiucao said.

At the weekend, 20 lamp posts were damaged in Kowloon Bay, targeted by protesters who said the "smart posts" were tools of government surveillance.

The pop star at the United Nations

Since the Umbrella Movement in 2014, Miss Ho's advocacy work has become as well-known as her popular songs.

In her two-minute speech, she called on the council to evict China from the group.

She was twice interrupted by the Beijing delegation - a moment shared on social media by Miss Ho's supporters and turned into art by Badiucao.

Police in Shenzhen said the 28-year-old trade officer had admitted to "illegal acts" - Chinese state media later said he had visited prostitutes. His family said that claim was fabricated.

Mr Cheng has since been released from detention, after he was held for more than two weeks.

A woman holds up a Badiucao poster of Simon Cheng, the British consulate worker who was detained in mainland China. Source: Nurphoto

The man in the yellow raincoat

Marco Leung has since been praised by some protesters as the first martyr of their cause.

The 35-year-old fell to his death from building scaffolding in June while trying to hang an anti-extradition bill banner.

【R.I.P. Raincoat Boy】
A young life passed away for HongKong tonight. I don‘t know your name my bro. But you will be known and you will be remembered, always！This drawing is for you. There is #NoChinaExtradition in heaven.
一个年轻的生命为香港陨落，我会记住，祝你安息。#反送中 pic.twitter.com/suz7dzwGKO

Last week Ms Lam made vague promises of opening a "dialogue" to find a pathway through the ongoing unrest.

She met with representatives from politics and education on Saturday to discuss the issue.

Read More
Why is China’s influence in Hong Kong getting stronger?

Badiucao said his cartoons are still a work in progress.

“I never see my political cartoons as finished work. I see them as visual journals. It gives me a trace to develop later,” he said.