The weather can impact all facets of our lives - it can cancel events and even destroy livelihoods - so what if we could control it?

What if we could make it rain over the garden or turn down the heat on a blistering day?

So much of our lives can hinge on a weather forecast. It has the power to cancel an event or even destroy livelihoods and natural wonders like the Great Barrier Reef.

And since the dawn of time people have been trying to predict and influence the seasons, whether it be via rain dances, rituals or prayers to the weather gods.

The idea of making it rain over drought-stricken farms has also seen big money go into the wrong pockets, according to experts.

Professor Steven Siems from Monash University’s School of Earth and Atmosphere says Australian farmers have sadly been targeted in the past.

“There's a real history of snake oil salesmen out there. People who are advocating and promising they can make it rain with no scientific basis.”

But despite Mr Siems’ claims, Australia has been home to two notable rain-making projects where the science stacks up, in Tasmania and in the NSW Snowy Mountains region.

Snowy Hydro’s Cloud Seeding Program boasts that it has been able to increase rain or snow by 14 percent over the colder months. NSW's Snowy Mountains region.
nationalparks.nsw.gov.au
Cloud seeding works by using minute particles of silver iodide which are added to a cloud, creating ice-like particles which then produce rain or snowflakes.

So, why can’t we just do that when we have a drought or bushfire?

“You have to have a very special condition called super cold liquid water... That's clouds with water below freezing, that remain as liquid and not turned into ice.”

What that basically means is that the clouds and climate over most parts of Australia are not ideal.

Plus when it comes to putting out a bushfire, there’s a whole different hurdle.

“It's very, very polluted air coming out of the bushfires, obviously to then throw in some salt particles or to throw in some larger particles to somehow enhance it to rain, [it’s] hard to see how that would work, to be perfectly honest,” Professor Siems says. Using the ocean to save the ocean

They’re pumping seawater into the sky so that small particles of seaspray drift up into the clouds above helping to reflect sunlight.

Dr Daniel Harrison, who is an Engineering Oceanographer at Southern Cross University, explains how it works.

“We use a cloud canon that we've got at the moment, which resembles a snow-making Canon. It only uses around 30 millilitres of water a second. And from that, it creates three gazillion droplets per second. And so that's just a shot glass of water creating gazillions of droplets.”

They’re using the ocean to try to save the ocean by brightening the clouds with those tiny droplets. The hope is it will cool the marine environment below over the warmer months, stop further coral bleaching and allow damaged areas of the reef to recover. 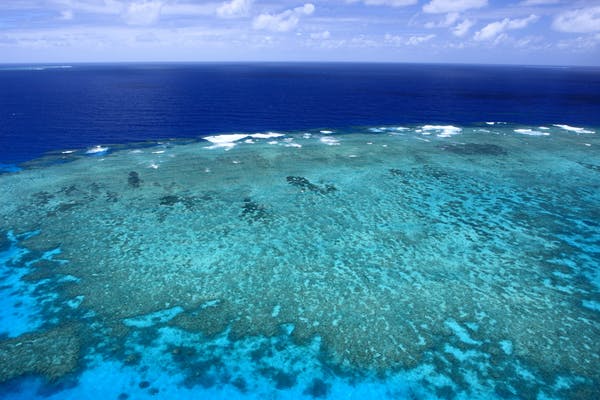 But what are the downsides?

“So, there are a few things that people are naturally worried about with an idea like this. The most apparent is, okay, well if you’re changing the clouds, what might that do to the local weather?” Dr Harrison says.

“The effect on the cloud is very small but when that’s integrated over sort of a few weeks to a few months, then the effect of actually cooling the water down on the reef might be the larger influence on the weather.”

The thing is, it’s not known yet what the full impact could be, which is why the program is being closely watched.

Where do we draw the line?

Scientists in other parts of the world have gone big, some have even tried to change the path of hurricanes.

But where do you draw the line?

What if we make it rain? Is that taking rain from somewhere else that needed it? And what if it rains too much and causes flooding? Who’s to blame then?

Professor Steven Siems says many of the repercussions of geoengineering are not yet known.

“At this point, I don't think that we really would have any appreciation of what we're doing. And then you run into the real catastrophe.”

“If you try to do something and the outcome is negative, you change the course (of a hurricane) and it goes into the city, or you change it and it still goes into an area of a population. If it does a lot of damage, who wants to be responsible for that?”

He says that while science may offer part of the solution, it won’t be the silver bullet for the global climate mess that’s largely human-made.

“There are two aspects why geoengineering scares me. The primary one is because I think people in governments will use it as an excuse not to do something about carbon emissions and to try to clean up the earth as much as possible.”

“The other aspect is that if we do try geoengineering, we really are not smart enough to know what the long-term effect of it is or what the other effects of it are.”

So can we control the weather?

It turns out, yes we can.