President-elect Donald Trump’s shock election victory is sinking in around the world.

Except for a select few, hardly anybody was expecting a Trump win Tuesday night.

As the outcome became clearer, the sense of dread was visible on the faces of progressives around the world. The loss for Democrats is all the worse when you zoom out to the wider picture.

Short of filibustering in the Senate, there’s little Democrats will be able to do to brace against the reformation of American politics. Clinton supporters react to live coverage of the US elections at an event hosted by the American Chamber of Commerce (AmCham) in Hong Kong.
EPA/ALEX HOFFORD

The loss is all the more frustrating because it seems the majority of Americans appear to have voted for Hillary Clinton – but like in 2000 have been let down by the electoral college.

In short, Democrats have been well and truly Trumped. The expert advice on explaining Trump to children

But still, such a loss is no excuse for the thoroughly graceless performance from many on the left.

Let’s make one thing clear: A democratic election followed by a peaceful transfer of power is in no way comparable to the mass murder of thousands of civilians.

The comparison is more disgusting than anything Trump has said on the campaign trail. 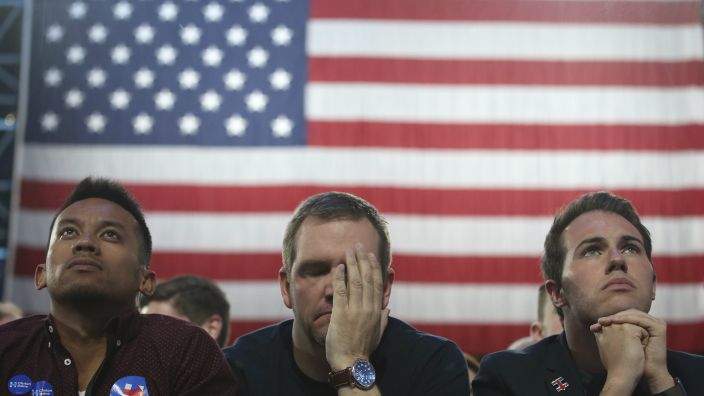 Trump's win is no excuse for deplorable behaviour.
AAP

Trump supporters were indignant on election night as Clinton refused to publicly concede – but Clinton supporters should also be disappointed.

Their candidate declined to show leadership to thousands of her supporters in New York and millions across the country.

At times like this, Democrats would do well to remember Michelle Obama’s catch-cry, one many claimed to embrace: The loss may be devastating, the feeling may be nauseating, the outcome may be rage inducing – but progressives have long held themselves out as superior in integrity to Trump supporters.

Now would be the time to demonstrate that.

Now would be the time to speak out against deplorable behaviour on your own side. Presidential candidate Hillary Clinton delivers her concession speech, from the New Yorker Hotel. Her purple blouse noted for it's combination of red and blue.
AAP

Both Clinton and Obama have now given graceful concession speeches for their party. Trump’s victory speech was measured and showed uncharacteristic grace.

“Donald Trump is going to be our president. We owe him an open mind and the chance to lead. Our constitutional democracy enshrines the peaceful transfer of power. We don't just respect that. We cherish it,” Clinton said.

“We are now all rooting for his success in uniting and leading the country. The peaceful transition of power is one of the hallmarks of our democracy. And over the next few months, we are going to show that to the world,” Obama said.

“Now it’s time for America to bind the wounds of division; have to get together. To all Republicans and Democrats and independents across this nation, I say it is time for us to come together as one united people. It’s time. I pledge to every citizen of our land that I will be president for all Americans,” President-elect Trump said.

To co-opt a rallying cry from the left: This is what democracy looks like. It's undoubtedly Obama and Clinton's hope that President Trump will be a significant departure from Candidate Trump.

Their supporters should hope for the same thing.

It will be a tough two years for the Democrats, but throwing a tantrum does no justice to the accomplishments of the Obama years.

As well as making the argument for their own agenda, they must seek to understand the concerns and anxieties of those who voted Trump.

The votes of more than 59 million Americans cannot be repudiated.

In just two years’ time, Americans will have the chance to repudiate Trump in mid-term elections.

If the administration is as reckless as many fear, a show of force from Democrats could retake the house and curb executive power.

It’s a safeguard built into US democracy. It should give a measure of solace to the left.

In two year’s time, Americans will have the chance to once again follow President Obama’s sage advice: