The NSW Northern Rivers region is being torn apart by conflicting opinions on the COVID-19 vaccine. With the area dubbed Australia’s anti-vax capital, locals fear that the tension is here to stay.

The Northern Rivers region of NSW has long been dubbed Australia's anti-vaxxer capital.

Renowned for its counterculture philosophy and laid-back lifestyle, the area has been put under pressure by the spread of misinformation and incidence of COVID denialism, fuelling vaccine hesitancy in the region.

Dr Joel Hissink, a General Practitioner from Bay Medical Centre in Byron Bay, told The Feed the community's reluctance towards the vaccine stems from the pre-existing shared fear of authority and scientific research.

Child vaccination rates in the northern rivers are Australia’s lowest. In the Byron Shire, 68.2 percent of one year olds are fully immunised, compared with 94.9 percent across the country. Dr Joel Hissink
The Feed
As of October 10, 47.1% of the Byron Shire has been fully vaccinated against COVID-19 compared to 73.5% in the rest of NSW.

Locals say the low vaccination rate can be attributed to a struggle between balancing the region's desire for personal freedom, and the collective good of the community.

Many in the area label themselves "vaccine-hesitant", emphasising that they mostly take issues with the social controls of the pandemic and have fear and mistrust around the science of the Covid-19 vaccine.

"The vaccine hesitancy campaign is exceptionally frustrating because it's not based on good science. It's ultimately causing a lot of harm to the community," Dr Hissink said.

But Meryl Dorey, the vice president of the Australian Vaccination-risks Network - a group saying it advocates for “vaccine safety and informed choice” - likened the current vaccine rollout to tyranny, and said the government is "bullying and coercing" people into getting the jab unnecessarily. 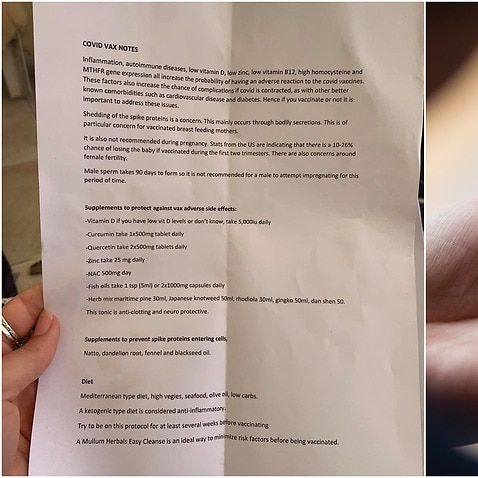 With the Northern Rivers region of NSW divided between those in favour and those against vaccination, residents fear the rift will be irreparable.

Artist Holly English is a long-term resident of the Byron Shire, having relocated to the coastal town as a teenager in search of an escapist lifestyle and a like-minded, alternative and progressive-thinking community.

But after three decades in the tropical paradise, she found herself on the outskirts after receiving her Pfizer shots in June.

“When I was younger, I wouldn't even take Panadol. I wouldn't get an x-ray. I was very much a supporter of totally natural therapies and health and I still am,” she said.

“But being vaccinated for COVID is different for me because this is the first pandemic in my lifetime. Artist Holly English
The Feed
But despite having the wellbeing of her family and community at the forefront of her decision, she told The Feed the backlash she’s experienced has been vicious.

“I’ve gotten a few negative reactions, to the point of being upset, from getting the vaccine,” Ms English said.

The strain of the divide is mounting additional pressure on local businesses already suffering in light of the extended lockdowns and tourism downturn.

Grant Rasheed from Ninbella Art Gallery in Bangalow told The Feed that the closure of his business had posed serious financial and emotional implications on himself and the artists that he commissions work from. Grant Rasheed from Ninbella Art Gallery
The Feed
“The low vaccination rate in our region is a worry. If the rest of the state opens, I could imagine that we will too, and the fact that there isn't a high rate of vaccination in the area is going to put us pretty much all at risk... I don't think the business community could survive another period of time in a lockdown.

“The negative press coming out about Byron Bay about our region of being the anti-vax capital of Australia is going to affect all of us immensely. And I'm not sure how we're going to turn that around. And I don't really see a great deal of the anti-vaxxers moving onto the side very quickly.”

Like many others in the community, he fears that the division will cause detrimental long-term tension in the region.

Ms English urged those hesitant to vaccinate to consider the suffering small business and vulnerable people in the area when contemplating their decision.

“I think the community of Byron may take time to heal from this division about different opinions around COVID.”