Chloë Reeson asks, "How does cancer affect the boundaries of the body?"

When I was 12 I had two lovebirds named Giacomo and Francesca. I had seen and enjoyed (I was 12) the movie Casanova with Heath Ledger and Sienna Miller. My family had just moved to Brisbane and I was hanging out with my mum a lot because I hadn’t made any friends yet. I wasn’t good at taking care of the birds. I thought they would bond with me quickly and sit on my shoulder and eat out of my hands. I had read in a book that if you sat next to their cage and blinked a lot they would understand you weren’t a threat because you weren’t keeping an eye on them. At first, I came home from school every day and blinked at their cage for hours but the birds never got used to me and, eventually, I got lax about taking care of them. My parents had to step in to help me. After a couple of months Francesca became eggbound and died and a week later Giacomo died too, which I’ve heard can often happen with lovebirds. 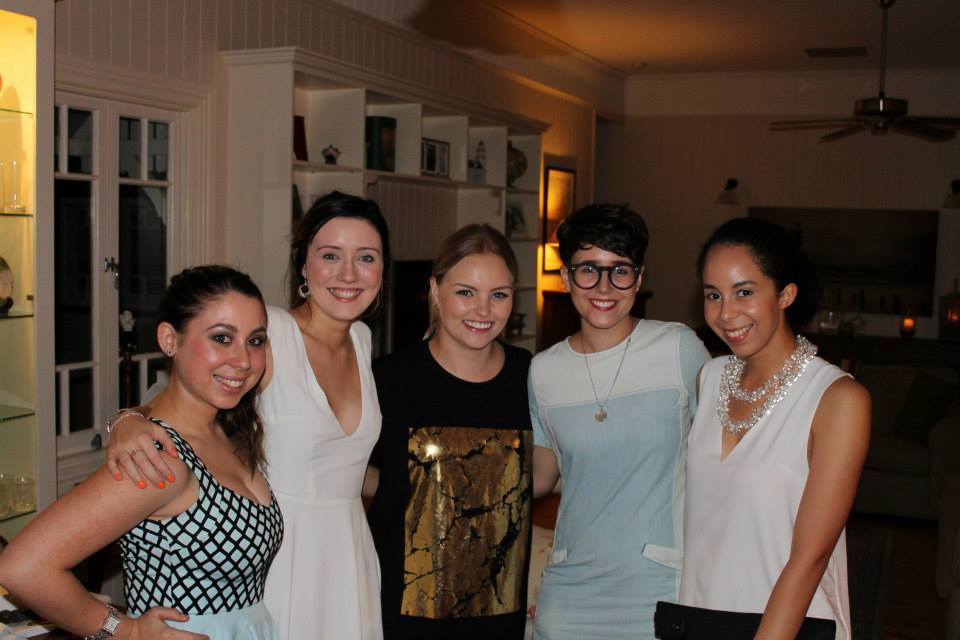 Chloë, second from right, before her diagnosis.
Supplied

When I was in my early twenties I discovered I had breast cancer. The night before my first mastectomy I kissed my breast goodbye in the shower. Well, I tried to. But as hard as I pushed I couldn’t make my little mate reach my mouth. She just flattened out against my chest and I got scared of pushing the lump too hard in case cancer cells shot out like a popped pimple. I was sad for my body that night knowing things would never be the same again and knowing I had never really appreciated my breasts while I had them.

A year later, I decided to have another mastectomy. This one would be preventative. I noticed the absence of that tender feeling. The second breast had been lost with the first. Like my lovebirds, when one died the other died soon after from heartbreak.

The second breast had been lost with the first. Like my lovebirds, when one died the other died soon after from heartbreak.

When I had breasts I found them beautiful not as a part of me but as pets, small and cute and always there. In a lot of ways, it was cancer that made me take notice of my body for the first time. I think it felt sad to lose the first breast because I felt guilty. I never nourished it as part of me and so it withered. It wasn’t just my breasts. I never inhabited any part of my body. I always put this down to some sort of aesthetic concern. Everyone hated their body it seemed. Nobody thought they looked good in photos. Nobody liked their size or weight. For me, it wasn’t so much a matter of how I looked to other people,  but that whenever I saw myself it was a constant surprise and after that surprise, there was something like fear. I couldn’t take notice of my body because doing so meant acknowledging that it wasn’t right, and then what? It wasn’t that I ever wanted to be a man but looking at photos of myself and seeing a woman always caused me distress. I had nothing left to lose and so I started to investigate that long-held discomfort.

What is a non-binary body?

We all have these other bodies, this other potential inside us. If anybody can be changed with the simple introduction of hormones or surgery, where are the fundamental differences? How can anyone be certain they are living in the ‘correct’ body?

Sometimes I say to my body: you can’t do anything right. Then I think: what would ‘right’ even look like? For some non-binary people, transitioning can involve surgery or hormone therapy or nothing physical at all. Top surgery (cutting breast tissue away to make the chest look more masculine or neutral) is often one of the surgeries people who are assigned female at birth aim for. It can be a strong signal to others trying to read what gender you what to identify with. Usually, after top surgery, some breast tissue remains to give shape to the chest. After my mastectomies, though, I had nothing. The doctors eliminated as much breast tissue as possible in order to reduce the possibility of cancer cells recurring. My chest domes like a baby’s or a dog’s, not a woman’s.

The other option is testosterone therapy. Periodic injections or creams of synthetic hormones that can cause facial and body hair, clitoral growth, acne, body fat redistribution. You can notice all or few of these changes in any number of combinations and degrees. "I think that gender is fake. I saw my body stripped raw by chemotherapy and it was neither male nor female, it was just dying."
Supplied

I take testosterone now. It’s a risk because my cancer was hormone responsive. Estrogen and progesterone made it grow but no one knows whether testosterone will, too. Doctors tell me I’m taking a risk but it’s only a risk because no one can tell me it’s not.

How can I prove that the risk is worth it? Do I need to be ‘successful’ at passing as a man? Would I also need to be successful in conventional terms (career, relationships, wealth)? Sometimes in transitioning I am suddenly aware of the ways my body is appreciated in its current form, appreciated for the ways that it is rational and acceptable. I remember people praising my clear, smooth skin and hairless arms, things I could lose in my transition and then what will I be worth?

How does cancer affect the boundaries of the body? Cancer strengthens the concept of boundaries while it gets to work destroying them. I destroy the concept of bodily boundaries while I get to work rebuilding them. Cancer is a senseless disease but my selfhood comes along with a consciousness that can rethink my body and rebuild it, again and again. I think that gender is fake. I saw my body stripped raw by chemotherapy and it was neither male nor female, it was just dying. The only thing I am certain of is that now my body is just living and it is a certainty more wonderful than anything I had known before.

Chloë Reeson is the co-creator of the new SBS comedy series 'Homecoming Queens' free to watch now on SBS On Demand.