The controversial procedure of cutting babies’ tongue and lip ties to improve breastfeeding has exploded in recent years - thanks in part to social media. But some mothers are questioning: is Facebook is really the space to seek advice for neonatal surgery?

Watch the full story on The Feed, Thursday @ 8:30pm on SBS Viceland

Mum of two, Eliza Seward, found out about tongue ties the hard way.

After an 'excruciating' time trying to breastfeed her daughter Greta, Eliza turned to a lactation consultant. She was told Greta was tongue-tied - and was advised to have it released.

There's no standard definition of tongue-tie but it's generally considered to be when the skin under the tongue (the lingual frenulum) restricts its movement, making it harder to breastfeed.

Removal involves a laser or scissors and the procedure is highly controversial.

The dentist Eliza saw to do the surgery said baby Greta also had lower lip, upper lip and buccal ties (at the top of her cheeks) and it all needed to be lasered.

For Eliza, it was "barbaric". 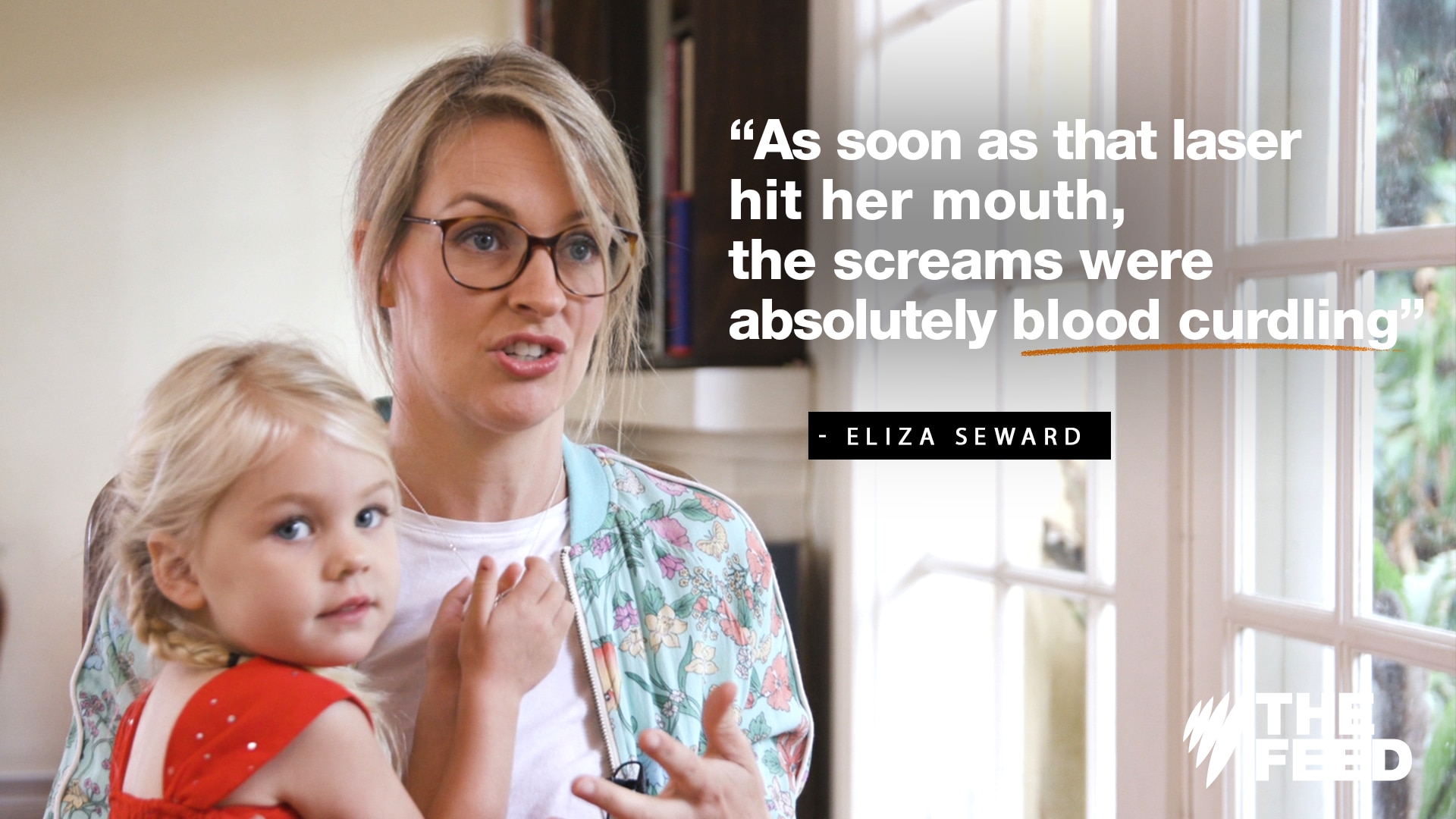 The surgery didn't change the way baby Greta latched on to the breast.

It dawned on Eliza that the medical professionals who told her to laser her baby had never actually watched her breast feed.

Eliza later discovered the problem was nipple thrush - easily fixed with a probiotic.

"I couldn't believe how much we'd been let down by the people we had trusted to care for us and our daughter", she said.

"You can't say anything negative about them"

There are a number of tongue tie focused Facebook groups in Australia, including Tongue & Lip tie support Australia, with almost 24,000 members.

Posts in the closed group reveal it to be a strong pro-tongue tie cutting forum.

After Greta's surgery, Eliza turned to the group for answers - but found little actual support.

The dentist Eliza took Greta to had glowing reviews.

"I thought wow they must be amazing ... no one's saying anything bad about them.

"And then later on I find out that's because you can't say anything negative about them."

Eliza says members are also pushing uninformed medical advice and promoting lists of so-called 'preferred providers' who do the procedure.

Other posts from the group reveal a disturbing picture: a baby with worse breastfeeding issues than before surgery and a baby hospitalised with postoperative bleeding.

In one post, even non-breastfeeding issues were attributed to tongue ties. 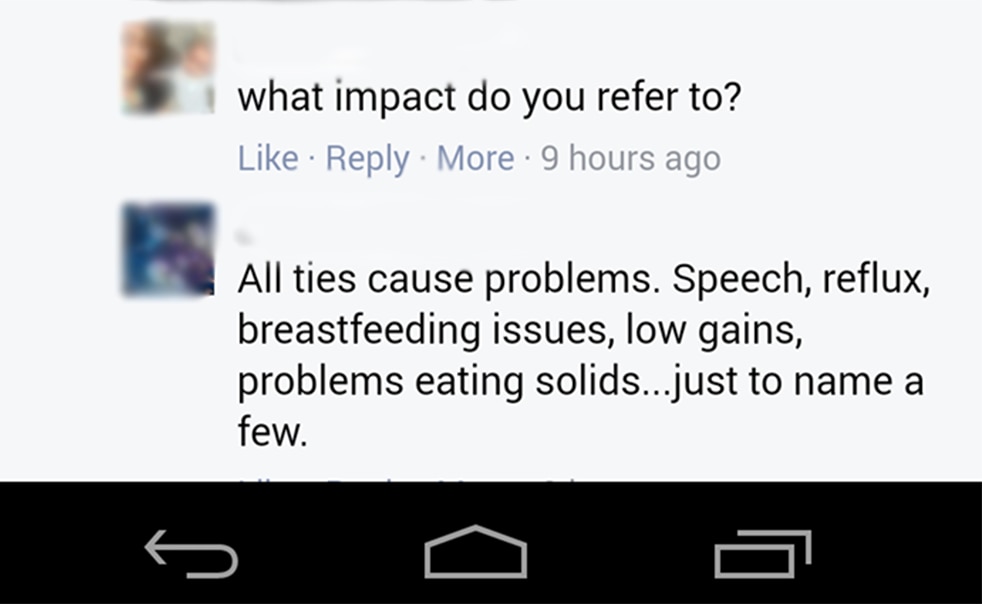 In another post, one mum was shamed for not completing the painful process of stretching their baby's surgery wounds with a finger to stop the cut ties from rejoining.

She later told a commenter: "I have no doubt you are trying to help. Unfortunately it's flared my post natal (sic) depression. Maybe next time think about the other person before you post."

She says Facebook groups provide a space for concerned mothers to be really listened to.

"That's the first thing that medical professionals aren't doing. They're not listening to mums, to their whole story, and they're not taking them seriously."

Debbie has been accused by medical professionals of providing medical advice she's not qualified to give. But she denies this.

"As mums talking in a mothers group we can't diagnose a tongue tie," she says.

"We're just helping mums to find someone who might be more helpful to them than the 15 medical professionals they've seen so far."

Dare to question status quo, risk being booted out

Melbourne lactation consultant Renee Kam says the pro-cutting groups are an "echo chamber" where those "who dare to question the status quo risk being booted out."

She claims this happened to her in the Tongue & Lip tie support Australia group.

In response, she's set up the Facebook group Evidence based tongue and lip tie information from health professionals.

"I wanted a page that sticks to the published evidence. Not opinion," she says. 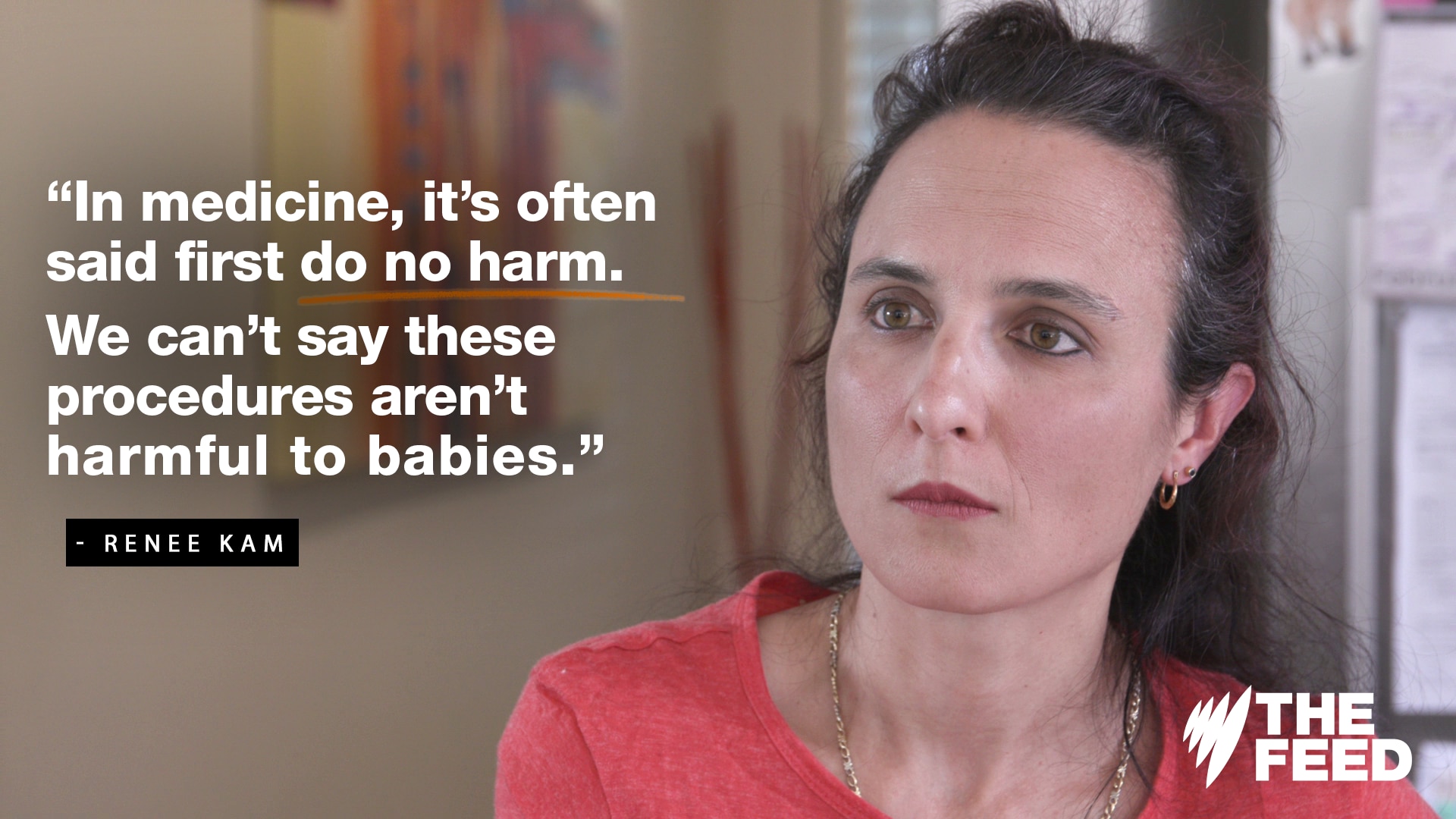 The Australian Breastfeeding Association website states that a tongue-tie can cause breastfeeding problems and to see a lactation consultant, if concerned.

Eliza Seward has now set up her own Facebook group.

"I felt what was lacking in this other group was support."

Her group, Tongue & Lip Tie Support Group - Uncensored, is named that way to flag to parents that all shared experiences are welcome.

The response was "amazing," she says.

"It was what it was meant to be: a forum for support, not medical advice."

Watch the full story on The Feed, Thursday @ 8:30pm on SBS Viceland, or catch-up on SBS On Demand