As fires tore through the small town of Mogo, NSW, Kizzy Nye risked her life to save her home. Now, as the world has become COVID-focused and the Bushfire Royal Commission is delayed, victims of Australia’s ‘Black Summer’ feel forgotten.

Kizzy Nye sits outside the home she fought for. It is Valentine’s Day and the burned houses in the south coast town of Mogo, NSW, have not yet been cleaned up. Caution tape has been tied around properties, many of which are also accompanied by asbestos warning signs.

45 days prior to this, on the 31st of December 2019, bushfires ripped through the small town, destroying some 300 homes and charring 271,000 hectares – or 79 per cent – of the surrounding Eurobodalla Shire.

10 days later, Prime Minister Scott Morrison appeared on the ABC’s 7:30 Report to ascertain that there would be some sort of inquiry into the unprecedented fire season we would soon come to know as the Black Summer.

On that same day, Kizzy was stacking tins of donated goods inside the Mogo Boomerang Meeting Place, an indigenous community centre that had quickly become a bushfire recovery and community hub. Kizzy at the Mogo Boomerang Meeting Place.
The Feed

When the fires hit, Kizzy and her son Riyan had stayed to protect their home.

“I only had my beat up pair of Skechers on and my pyjamas,” she tells The Feed.

Equipped with a $20 Bunnings garden hose, Kizzy and her son saved their home; the lasting legacy of her late father.

Wearing those same “firefighting Skechers”, Kizzy takes down the names of people who have lost everything and directs them to donations that will help tide them over; baked beans, tinned fruit, soap and sanitary pads.

The people at the centre consist of family members, friends and strangers; all there to either pitch in or receive support. They swap stories; a visceral, shared compilation of their town’s devastation. 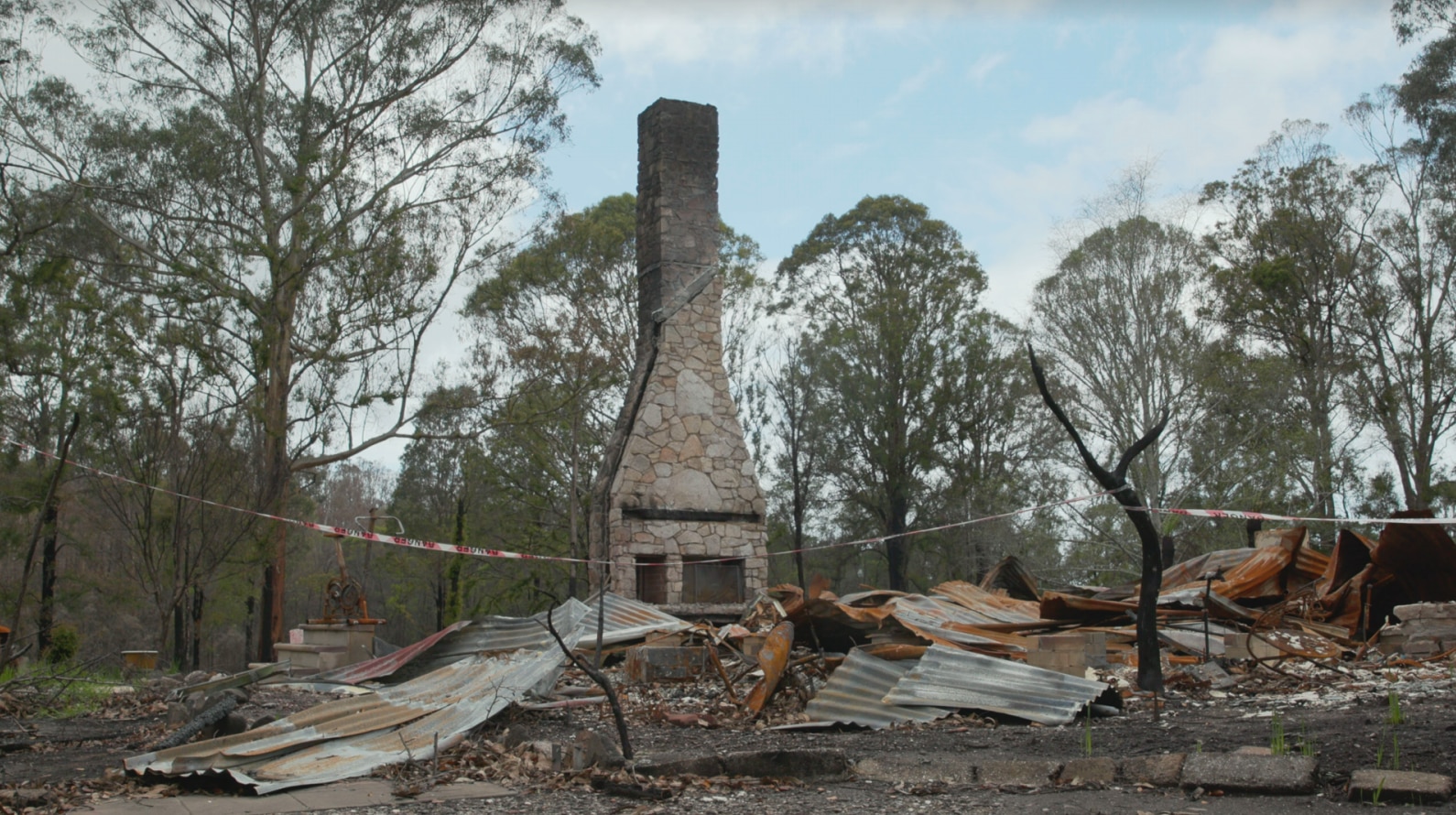 Mogo in NSW in February.
The Feed

“There was this noise,” Kizzy’s sister Sherrie Nye says of the fire front.

“It was like an angry ocean, but we knew it wasn't the ocean and there was no stopping to the noise.”

“I was prepared as best as I could be to fight for what I had but at that moment in time I thought, nah... I'm not. She will win the war.”

“Cause it burnt down lots of houses and because it made everyone scared.”

How do you move on, when the reminders are everywhere?

On the 11th of January, ABC’s Insiders Host David Speers put to the Prime Minister: “As our national leader should you have seen some of the warning signs that were there and done more?”.

The interview quickly escalated into a tit-for-tat regarding the warning signs versus the government’s preparedness. The definitive answer to that debate remains to this day, unclear. 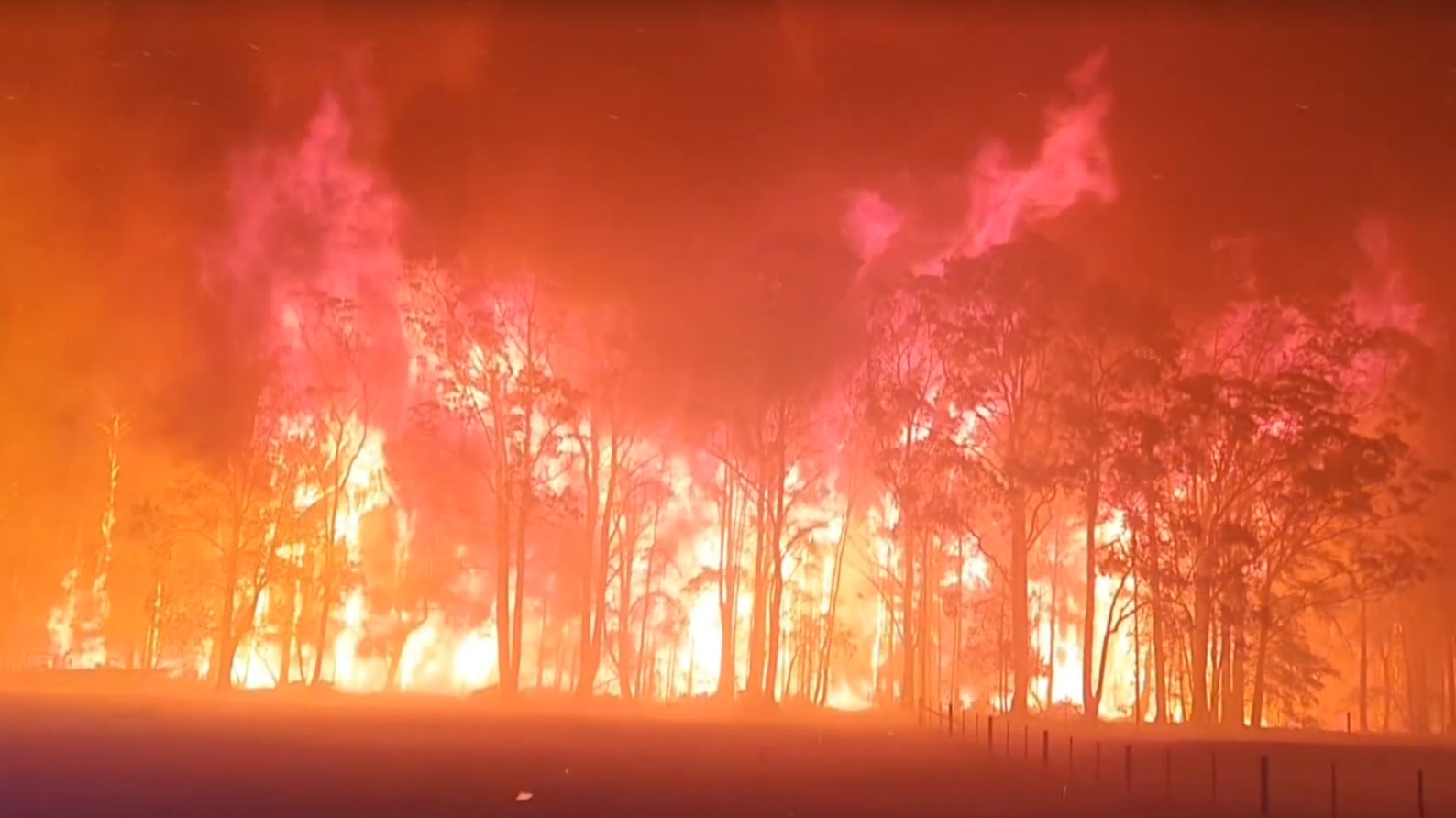 On New Year's Eve, fires tore through the town of Mogo, destroying some 300 homes.
The Feed The aftermath of the fires in Mogo, NSW.
The Feed

Hours before that televised interview, Mogo resident and mother-of-three Magenta Byrne had sifted through the crumbled remains of her home; bed spring coils, broken bits of crockery, a surviving cast iron fry pan.

Magenta says her husband Damian had attempted to save the family home but “there was too much fuel in the forest”.

“[He] was scorched driving out of the forest, the back wheels of the car were on fire.” Magenta's house was destroyed by the devastating summer bushfires.
The Feed

Magenta’s property is situated on a hill and has an expansive view of the South Coast bush; hundreds upon hundreds of charcoal tree trunks stand black and bare, some still smoking.

In a matter of weeks, this scene would change only slightly.

In the immediate aftermath of a fire, a burned eucalyptus tree has an internal biological reaction, wherein seeds deep within the bark of the tree will begin to produce emergency foliage. Weeks later, the trunks begin to sprout leaves. Known as epicormic growth, they signal that the tree survived. Magenta's home in the aftermath of the fires.
The Feed Magenta examining the remains of her charred home.
The Feed

45 days after the fires this is – for the most part – what the bush surrounding Mogo looks like; blackened stumps sprouting fresh peeps of colour.

Kizzy says the community’s main concern is the clean-up in the aftermath of the fires.

“People need to move on, you know, and you can't do that when the first thing you see when you come to town is somebody's house burnt.”

The recovery continues for bushfire victims

Trauma in the wake of a bushfire can often be forgotten by those lucky enough to not be victims. Painful, personal moments – like having your home razed down and dragged away – don’t quite make news headlines.

Professor Lisa Gibbs from The University of Melbourne’s School of Population and Global Health spent ten years studying the long-term impact of the Black Saturday fires. Her studies have found that the “ongoing changes” experienced in the aftermath of a bushfire can continue the trauma cycle.

“There is not really a widespread understanding of how long it takes to recover from these events and how complex it is,” she says. Kizzy continues to volunteer her time to help her neighbours who lost their homes.
The Feed

To add to that complexity, exactly one month after the official Mogo clean-up had “kicked off’, the World Health Organisation declared COVID-19 a global pandemic. Australia – and the world – went into lockdown.

Despite this, Kizzy continued with her grassroots bushfire relief efforts, driving groceries and other essentials to neighbours’ doorsteps.

On April 16th, the Royal Commission into National Natural Disaster Arrangements began via an online hearing from Canberra. Come July, it was announced that the results of the inquiry would need to be extended.

“After the bushfires came through there was a big sense of attention to our plight and then very shortly after COVID came along,” Magenta says.

“There have been moments of feeling a bit abandoned.”

The news cycle has moved on, but the lasting impact of the bushfires continues for victims. 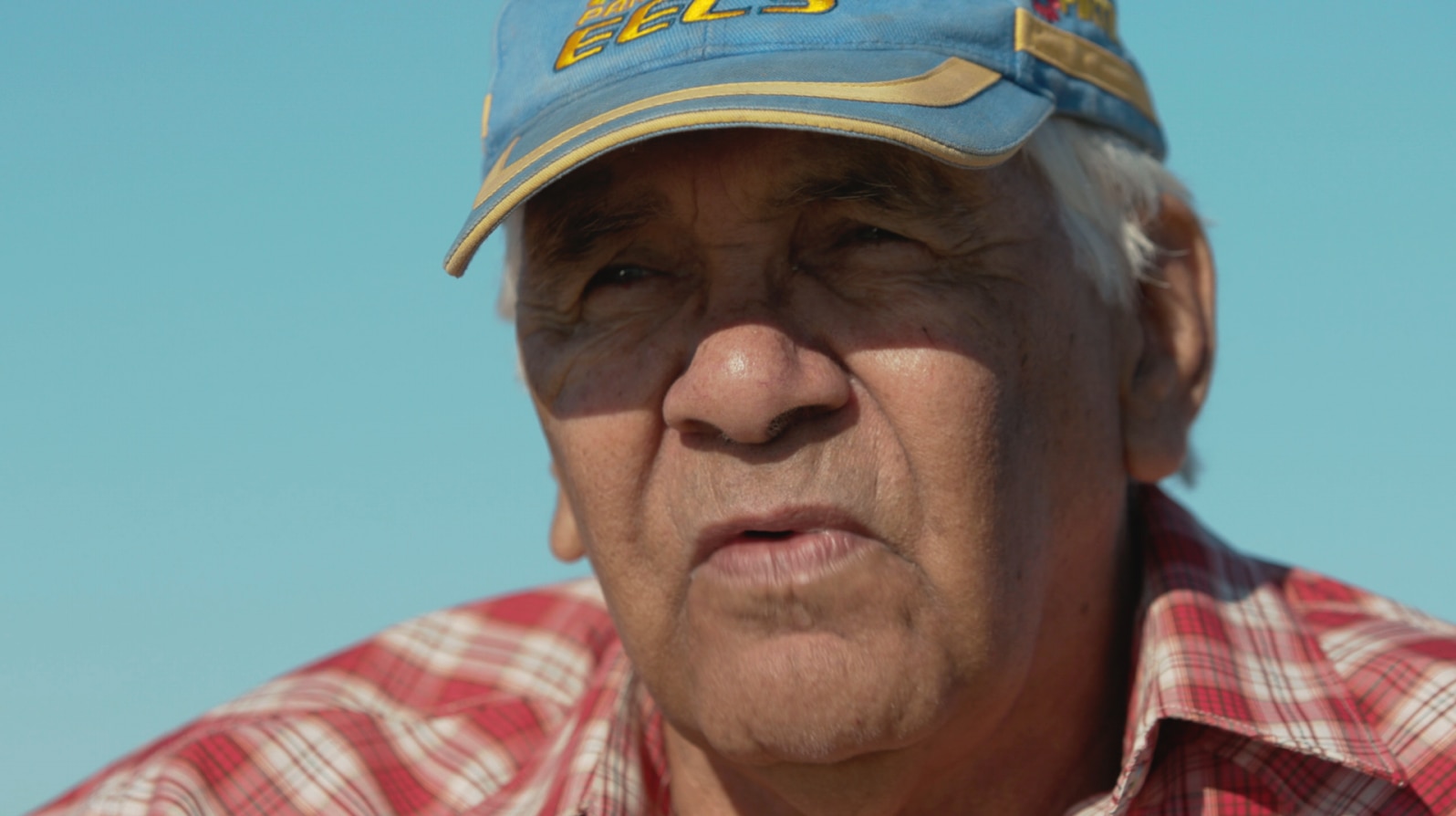 “I can lay in bed through the day and if I'm not watching TV, if I'm just in there and really doing nothing, I think about the fires all the time,” Andrew Nye says.

“You can hear it, you can smell it, and it's very scary.”

Standing in a forest clearing surrounded by burned trees that have sprouted fresh leaves, Kizzy reflects on the intensity of the fires, and the closure the community needs.

“It shouldn't have happened. Somebody should be accountable.” 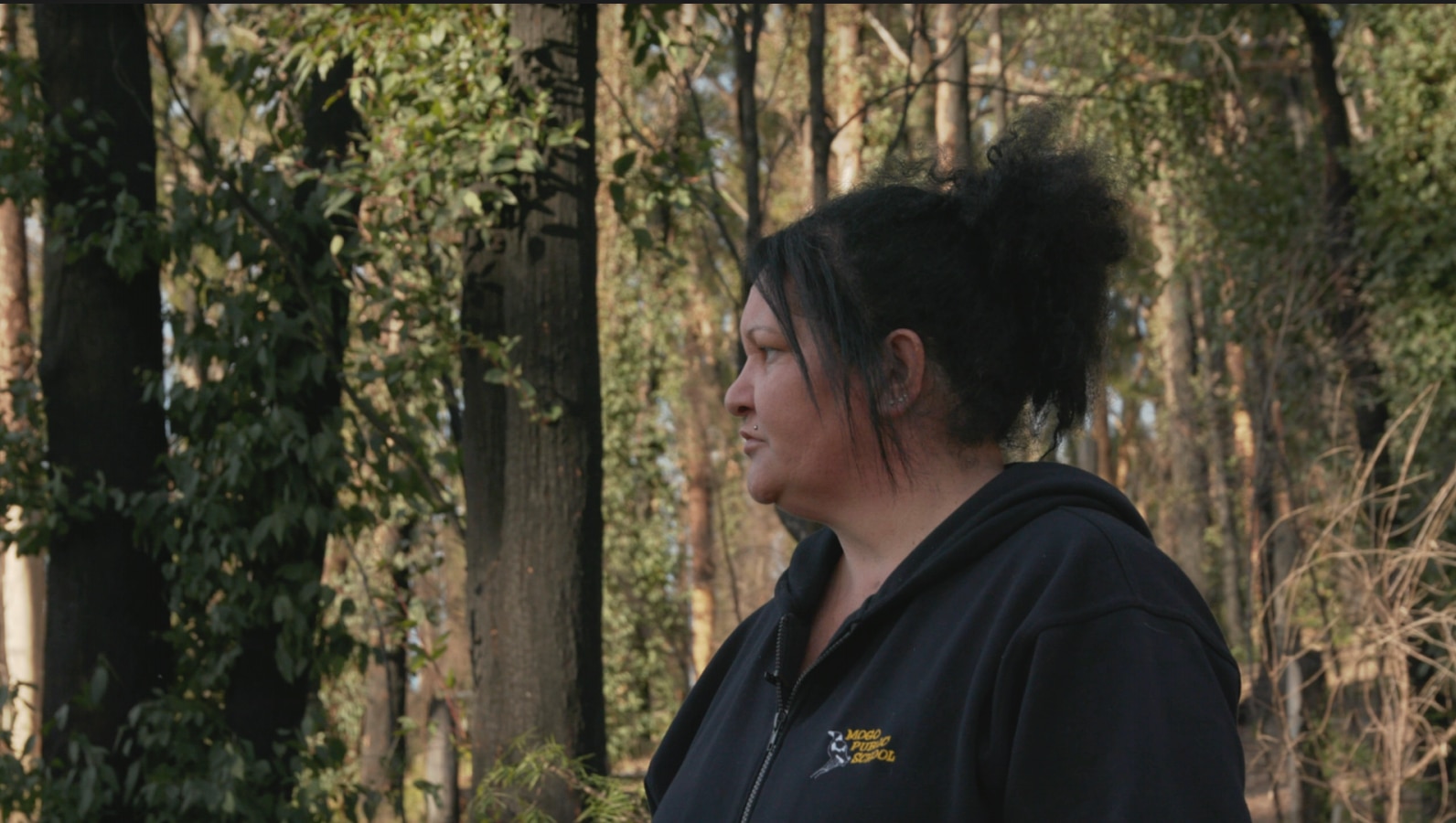 And that accountability is still pending. The deadline for the Bushfire Royal Commission is now due October 28: 303 days after the Black Summer fires tore through Mogo.

Anyone interested in reaching out to the Mogo community can do so via the Mobilising 4 Mogo initiative.