Australia has abundant savannas, woodlands and rainforests that various species of rhinos need to survive. But would introducing rhinos to Australia mean reducing efforts to save them in the wild or conserve their natural habitats?

Rhinos in Australia might seem like an insane proposition – after all, we’ve had historically bad luck with introduced species.

There are five species of rhinoceros in the world: two in Africa and three in Asia.

The world of all five species is being rapidly destroyed and shredded, their savanna and forest habitats sliced apart by clearings, fences, roads, and other obstructions.

Even worse, they are being slaughtered by armed poachers for their valuable rhino horn, which is falsely thought to have aphrodisiac or curative properties, for maladies ranging from hangovers to cancer.

Vietnam and China are overwhelmingly the biggest consumers of rhino horn. Chinese citizens and even diplomats working in Africa and Asia have reportedly engaged in the illegal smuggling of rhino horn and other wildlife products.

Rhino populations are on the brink

Rhinos are relicts of a great megafauna that until recently dominated the planet. Today, they are some of the most endangered animals on Earth.

For instance, the Sumatran Rhinoceros is so rare that biologists refuse to disclose where it still lives, to avoid tipping off poachers – beyond confirming it persists in small pockets of northern Sumatra, Indonesia.

The Javan Rhinoceros was once the most abundant rhino species in Asia, ranging from Southeast Asia to India and China. But today it is one of the rarest mammals on Earth, with just 60 animals surviving in far western Java, Indonesia.

The Sumatran Rhinoceros is so rare that biologists refuse to disclose where it still lives.

In Africa, White Rhinos and Black Rhinos are having mixed fortunes – but mostly bad.

The Black Rhino was once widely distributed across eastern and southern Africa, but its numbers have dramatically fallen and nearly half of its unique subspecies have vanished. The White Rhino has two distinct subspecies. The southern subspecies collapsed to just 20 individuals a century ago, but with dedicated protection it has made an astounding comeback to around 20,000 animals today, by far the most numerous of all rhinos.

But the northern White Rhino is virtually gone. The last male died on March 19, and only two females are alive in captivity.

In recent weeks scientists have used frozen sperm and harvested eggs to create a few test-tube embryos, which they hope to implant into a southern female in a last-ditch effort to stave off the northern subspecies’ demise.

All of this means that most of the nations with rhino populations are having profound difficulties maintaining them. Not that it’s easy. Rhinos are big, near-sighted, and rather predictable in their habits – easy prey for poachers.

They live in developing nations with many impoverished people, where lethal weapons are frighteningly common and the rule of law is precarious. 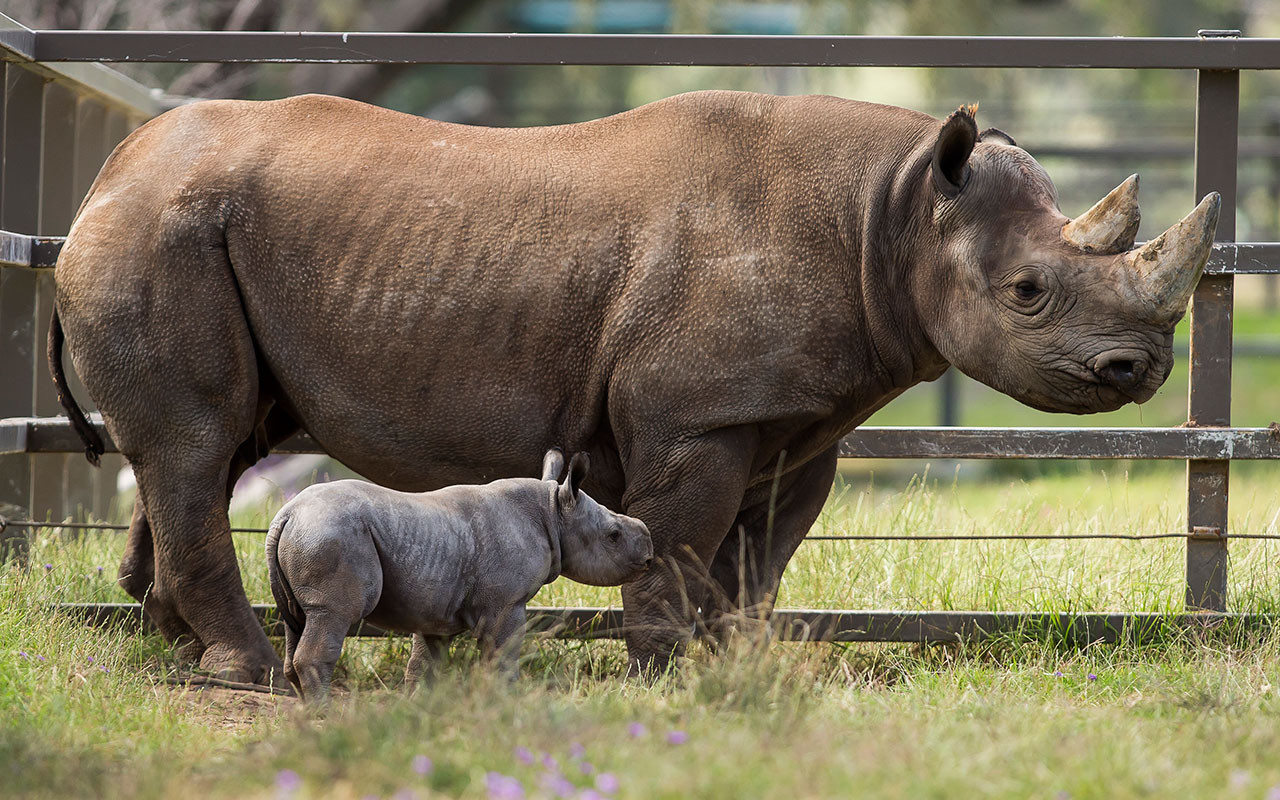 In efforts to staunch the slaughter, some nations are de-horning their rhinos, or assigning guards to watch over them day and night, like heavily armed sheepherders.

South Africa is even treating rhino-horn powder with powerful poisons to help scare off illicit consumers.

Lynn Johnson, an enterprising Melbourne businesswoman, has raised tens of thousands of dollars to place ads in Vietnamese magazines and newspapers, warning about the poisons and decrying the rhino slaughter.

South Africa is even treating rhino-horn powder with powerful poisons to help scare off illicit consumers.

Such measures are certainly helping, but it’s a fraught battle. Roads are proliferating dramatically in developing nations, increasing access to ecosystems for poachers. And human populations and the many pressures they bring are growing rapidly in Africa and Asia.

Some experts believe that captive breeding is the most viable near-term solution, especially for the distressingly rare Sumatran and Javan Rhinos. Maintaining them in zoos or breeding facilities keeps alive the hope that they might one day be reintroduced to the wild.

Is introducing rhinos to Australia a crazy idea?

Before you laugh, consider this.

Australia has abundant savannas, woodlands and rainforests that the various species of rhinos need to survive.

And rhinos are generalist grazers or browsers, meaning they are not especially picky about what they eat. Eighteen of the African Rhino Horns worth 2.91 million euro on display during a press conference in Sepang, Malaysia, 10 April 2017.
EPA

Australia has a strong rule of law and minimal wildlife poaching, with huge numbers of ecotourists who would surely be keen to see spectacular rhinos. One group, the Australian Rhino Project, is already trying to establish a White Rhino population in Australasia.

But while I might be crazy, I’m not stupid.

I am not suggesting that rhinos be allowed to roam free in Australia. Under such circumstances they could degrade native ecosystems and even pose a danger to people. Rather, rhinos should be contained in cattle stations or other enclosed areas.

And I am not suggesting that harbouring rhinos in Australia would mean reducing efforts to save them in the wild or conserve their crucial habitats.

Indeed, preserving rhinos without protecting their native ecosystems is like saving a few shiny baubles from Christmas, while throwing away the Christmas tree that held them.

Rather, the idea would be to establish semi-wild or managed populations that could buffer rhinos against global extinction, and at the same time provide public education and raise money.

Any effort that failed to provide revenue to conserve wild rhinos and their native habitat – especially if it competed for funding with current conservation initiatives – would be a perverse and undesirable outcome.

Of course, when it comes down to it, introducing rhinos to Australia is a pretty wild idea. Maybe my tongue is in my cheek, and I’m just trying to get other tongues wagging about the desperate need for rhino conservation.

But whatever we do about rhinos, it’s clear that desperate times call for desperate measures.