Breakfast TV isn’t just overwhelming white, but it’s also had a tumultuous history when it comes to Indigenous issues. During NAIDOC Week, NITV will broadcast the first-ever ‘Big Mob Brekky’, so we’re looking back at some of the industry’s troubled moments.

Breakfast TV has been long-criticised for its coverage of Indigenous issues and startling lack of diversity.

A recent report from Media Diversity Australia revealed more than 75 percent of on-screen talent have an Anglo-Celtic background while only six percent have an Indigenous or non-European background.

From Monday 9 November, hosts Shahni Wellington and Ryan Liddle will be joined by a line-up of special guests, with the program featuring segments on wellness, comedy, cooking, sport, community call-outs and live performances.

The program is a stark reminder of just how far we have to go when it comes to diversity on breakfast TV. So to mark the occasion, we’ve curated a list of breakfast TV’s most problematic moments of covering Indigenous issues.

A segment aired by Sunrise in 2018 about ‘Aboriginal adoption’ was widely criticised by Indigenous groups and eventually found to have breached broadcast standards.

The segment featured an all-white panel debating whether “abused” Indigenous children should be adopted by white families.

Panellist Prue MacSween controversially claimed some children in the Stolen Generation were taken “for their wellbeing” and suggested “perhaps” the government should do it again.

It led to weeks of protests outside the Sunrise studio in Martin Place. During one instance, Sunrise appeared to show previously shot footage at Martin Place behind the presenters and drew the soundproof blinds while protesters were outside.  A spokesperson for Seven told NITV this was because some of the protesters were holding offensive signs. 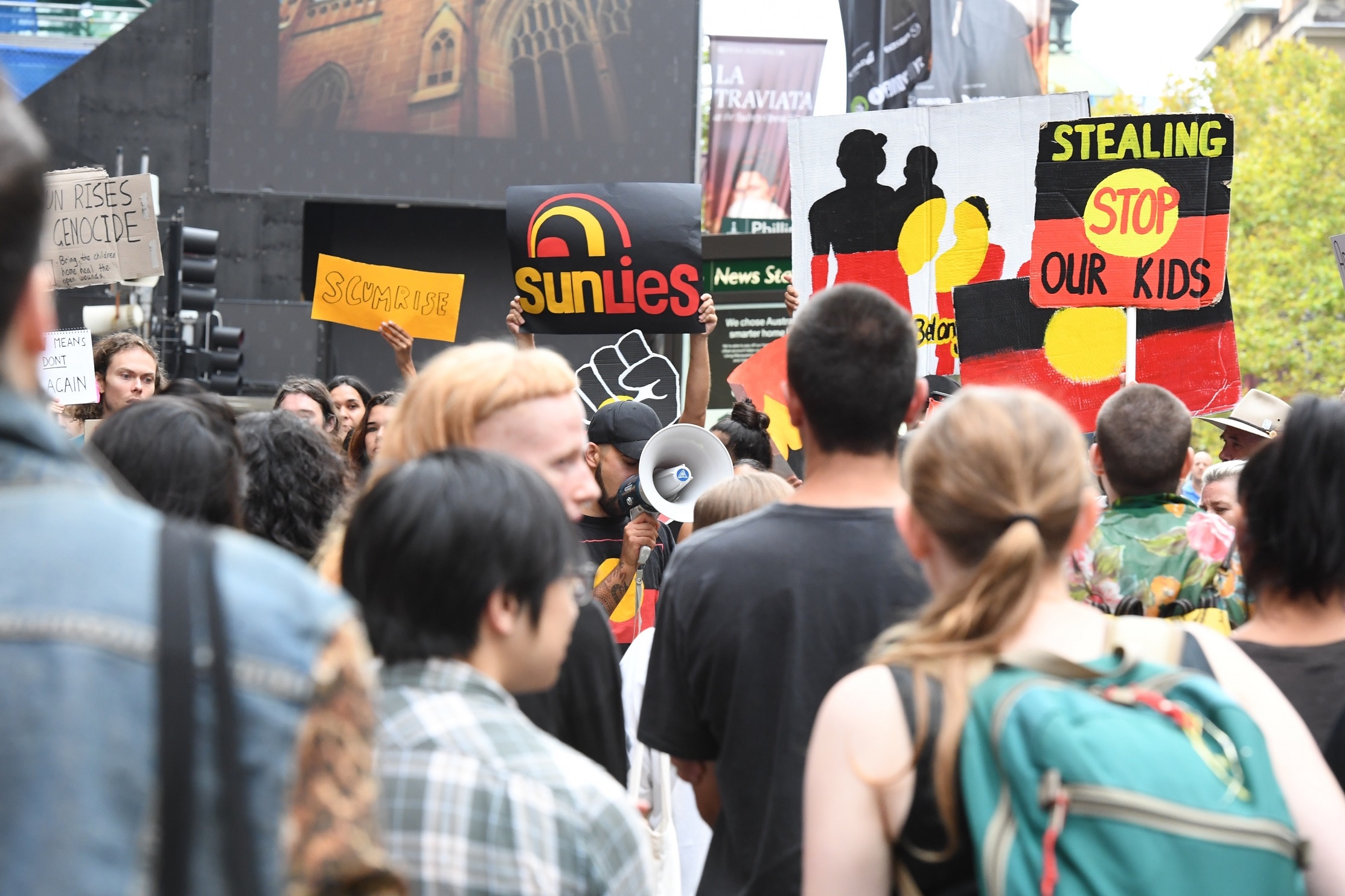 The spokesperson said they acted “to ensure regulatory compliance and bearing in mind the potential for young children to be watching, the decision was made to utilise a generic backdrop.”

As reported by NITV, during the discussion, Sunrise also played slightly blurred and unrelated footage of members of the Yirrkala community.

In 2019, a settlement was reached between Channel Seven and the group after the TV network agreed to issue a formal apology and pay the group an undisclosed amount. 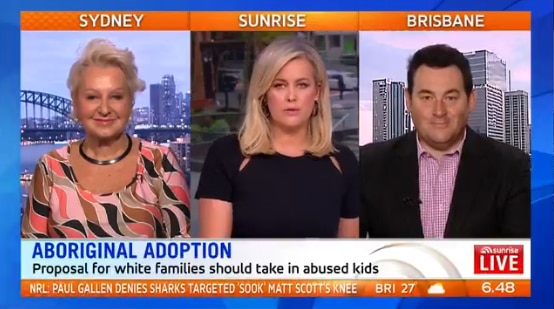 The panel discussion that Samantha Armytage and Prue MacSween will be sued for racial vilification over.
Twitter / Sunrise

The Indigenous group’s lawyer Stewart O’Connell told BuzzFeed News they were pleased with the result.

“It is our hope that media companies generally will exercise more care and respect in the future as to the use of footage of Aboriginal persons,” he said.

Presenter Samantha Armytage and commentator Prue MacSween are also expected to face a court battle over the segment in an action led by Aboriginal elder Aunty Rhonda Dixon-Grovenor.

"This shameful, profoundly hurtful and devastating display of racism was broadcast by a commercial television station into homes right across Australia; the dignity of all Aboriginal people and children was violated in our very own homes and lounge rooms,” said Aunty Rhonda in a statement in June.

It comes after they say settlement negotiations broke down in a group racial discrimination complaint filed in the Australian Human Rights Commission.

Before Pauline Hanson was booted from Nine'sToday Show for claiming some residents of Melbourne’s housing towers were "drug addicts" and "alcoholics", she was a regular guest on the program.

Back in 2019, Hanson appeared on an all-white panel to debate whether Australians should be permitted to climb Uluru.

“I can’t see the cultural sensitivity when people have been climbing the rock for all these years, and all of a sudden they want to shut it down?”

A Current Affair aired a story which showed Hanson climbing Uluru before the activity was banned. It was later revealed that Nine paid for Hanson’s flights and accommodation for the trip to Uluru.

An Indigenous group told NITV at the time they were “disappointed” that Hanson had chosen to scale the sacred site. 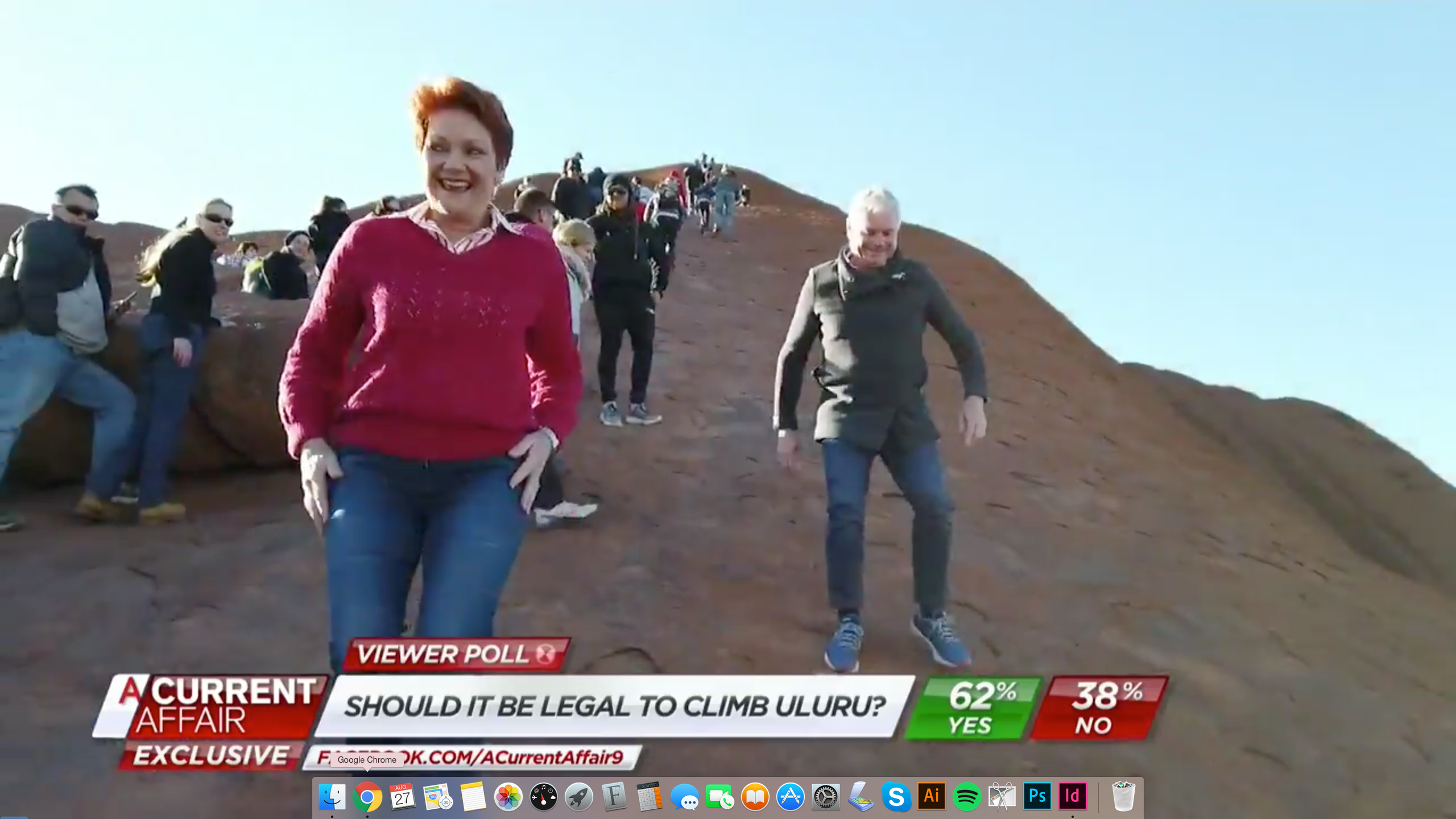 Pauline Hanson smiles as she passes the trail of climbers on Uluru.
Nine Network

Australia, you are exhausting. https://t.co/Y5yLXV8xLK

Yumi Stynes and Kerri-Anne Kennerley clashed epically on Studio 10 last year during a discussion about changing the date of Australia Day.

When asked about Indigenous Australians’ concerns about the white invasion of Australia, Kennerley said: “It was a couple of hundred years ago. Get over it. Let’s just move on”.

Kennerley also claimed protesters wishing to change the date should be more concerned about the state of Indigenous communities.

“The 5,000 people who went through the streets making their points known, saying how inappropriate the day is — has any single one of those people been out to the Outback, where children, babies, five-year-olds, are being raped?", she said. 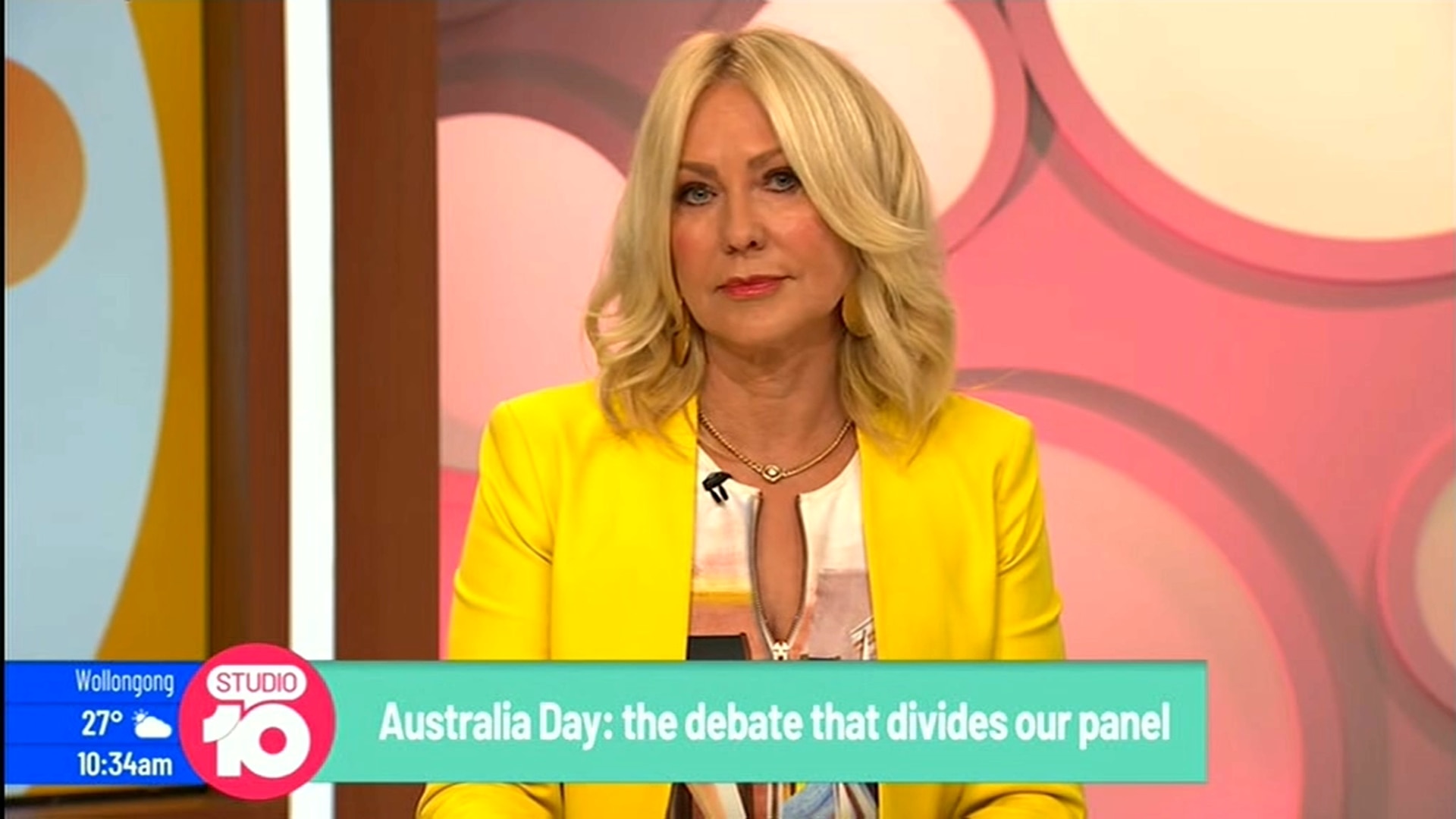 Stynes, who was visibly shocked by the comments, told Kennerley "every time you open your mouth, you're sounding racist."

The broadcast industry’s watchdog, the Australian Communications and Media Authority, said while Kennerley’s comments were “capable of provoking strong negative feelings”, they did not breach the Commercial Television Code of Practice.

“As the ACMA has previously noted, broadcasting views that may be offensive or controversial does not, in and of itself, constitute a breach of the relevant Code provisions,” the watchdog said in its findings.

Following the discussion, Kennerley was invited to spend time with Indigenous women in a remote community in Alice Springs. 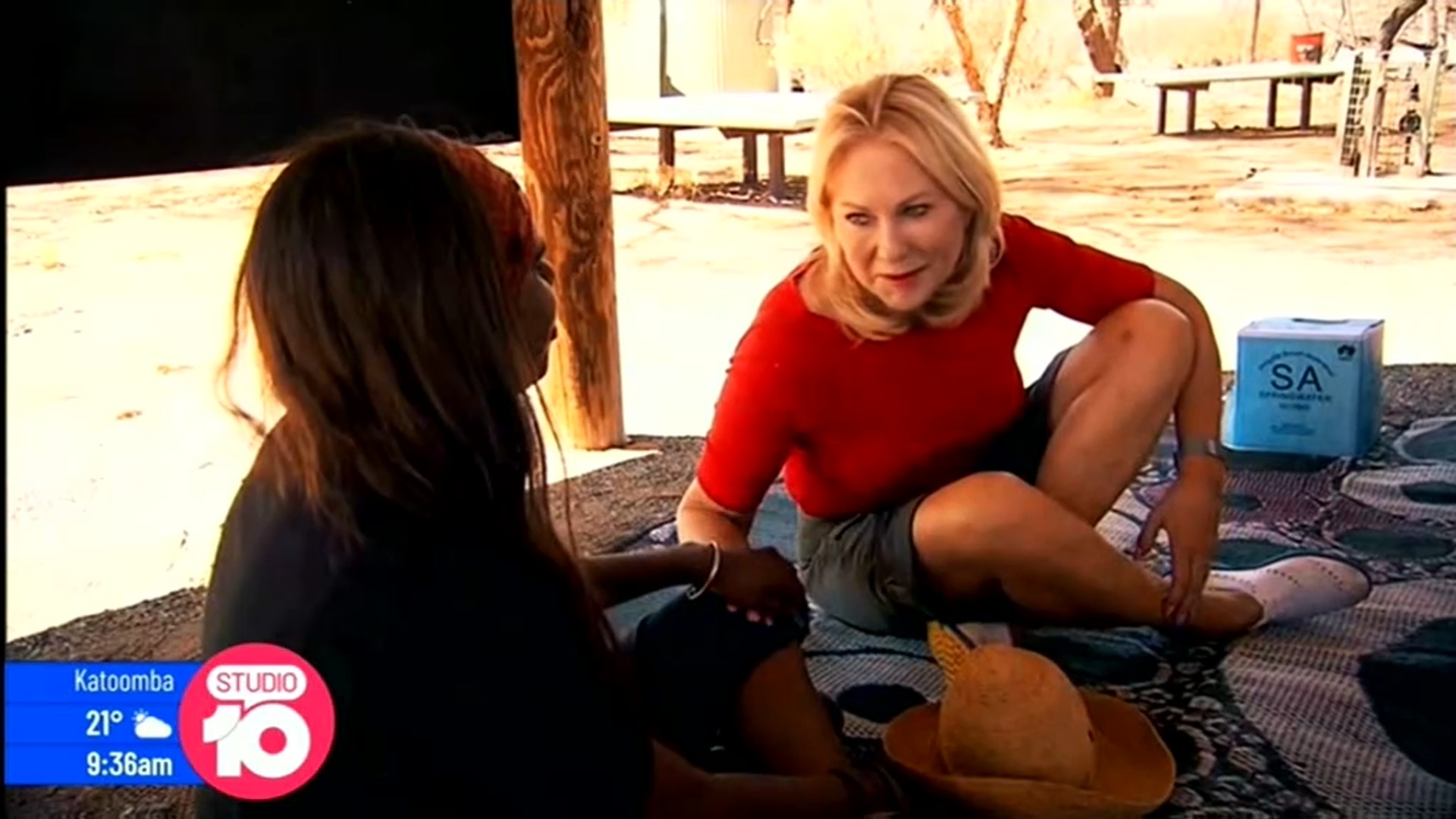 Appearing on Studio 10 from Alice Springs, Kennerley admitted that while she asked the community for forgiveness, she wasn’t sorry for her remarks.

“Does that mean you were sorry for your approach to the issue or what you said on the panel that day?”

Kennerley replied: “It’s not that I’m sorry, I’m just so glad that I had the opportunity to tell Australia what’s going on out here.

Indigenous woman and Today Show entertainment reporter Brooke Boney became a target of online abuse after explaining why she’d like to see the date of Australia Day changed.

Speaking on Nine’s Today Show, Boney said she’d tie an Australian flag on her neck any other day of the year.

“I can’t separate 26th January from the fact that my brothers are more likely to go to jail than school or that my little sisters and my mum are more likely to be beaten and raped than anyone else’s sisters or mum. And that started from that day,” she said. 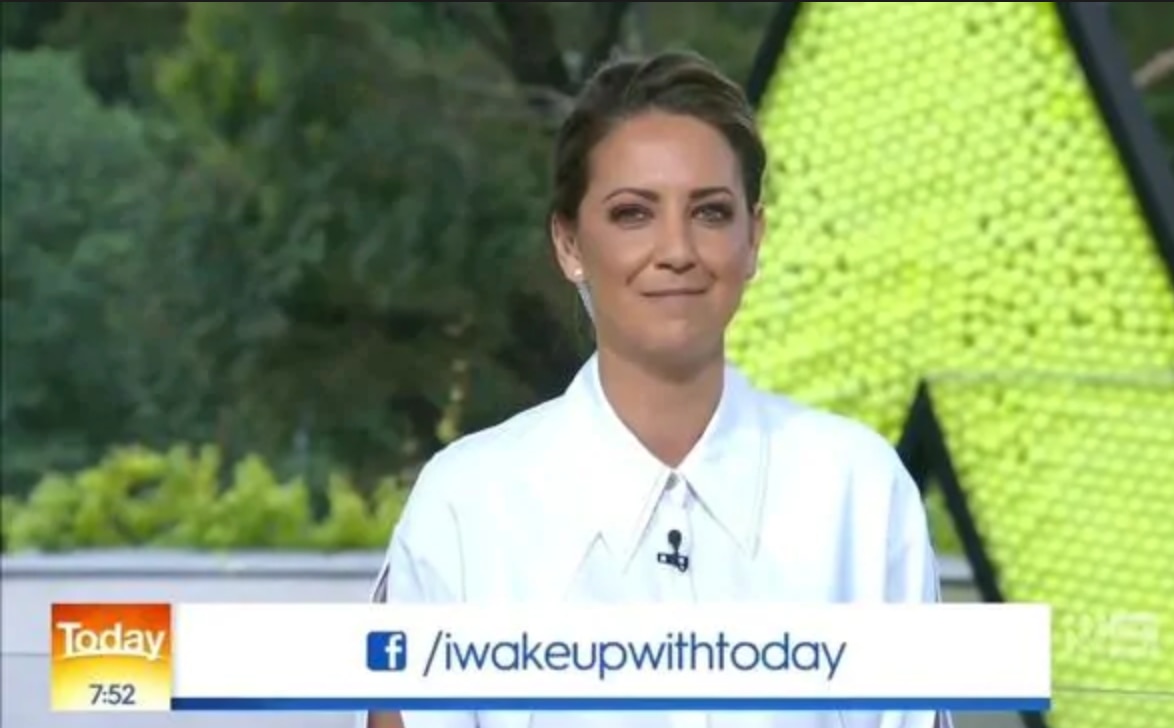 Appearing on Insight, Boney later confessed she didn’t expect such a “big and severe” backlash over those comments.

“I knew there’s a big part of our country who haven’t heard different perspectives on big questions of our national identity before … that was a big part of the reason I wanted to go work at Channel 9. But I didn’t understand how new the concept would be to so many people,” she said.

“There were people saying really awful things about me, about my family — it’s really hard when people say threats” she added.

The Today Show’s coverage of the Black Lives Matter protests

The Today Show was blasted by Indigenous and non-Indigenous Australians earlier this year when journalist Alexis Daish told a Black Lives Matter protester that Australians do not understand police killings.

“I really appreciate you giving your perspective mate, because people in Australia don’t have the understanding of the history of police killings and things here,” Daish told an interviewee.

Dear Native Americans and Black Americans, I am sorry for the ignorant Australian press who fronts up to your rallies not knowing a thing about their own country's history so they can feign superiority. Solidarity. #BlackLivesMatter #GeorgeFloydProtests https://t.co/3kZ5bNKBZG

"People in Australia doesn’t have the understanding of the history of Police killings here’. No; WE definitely do understand. We also have our own history of killings at the hands of police. What ignorance,” he added.

“The way she spoke down to & couldn’t intellectually engage with the protestor is shameful,” she tweeted.

“Some of the commentary is so lacking in insight a blank wall would communicate a more nuanced analysis.”

Come NAIDOC week, Ryan Liddle will be hosting 'Big Mob Brekky' alongside Shahni Wellington. He told The Feed he’s excited to represent Indigenous communities in a space where “you don’t see representation so often”.

“I think Indigenous representation has come such a long way in the last decade or so. The week gives us an opportunity to bring the nation’s attention to our plight and what challenges still lay ahead,” he said.

The TV host believes breakfast television has often neglected the multicultural nature of Australia by failing to show the nation’s “diverse viewpoints”.

Excited/Proud to be part of something BIG! Myself and @Liddle86 going to be setting our alarms nice and early to host @NITV 's 'Big Mob Brekky'. Plenty of special guests will join us, including live crosses to @FNMediaAust . Tune in 7:30 every morning during NAIDOC Week! 🎉 pic.twitter.com/cbxcIKRHKI

“Aboriginal people are the best at telling those Aboriginal perspectives and I think, for the most part, stories that concern us are often not told by us or for us,” Liddle said.

“We’re lucky to have a few people out there like my friend Brooke Boney running the gauntlet and flying the flag. But one amongst a sea of others is probably not enough,” he added.

“Big Mob Brekky will be fun, it’ll be light but we’ll also be sharing those stories which are a bit more serious. It’ll be educative and informative and hopefully entertaining, so please tune in.”

‘Big Mob Brekky’ will air on NITV at 7:30am Monday-Friday during NAIDOC Week from Monday 9 November.

The real appeal of QAnon