From "Thrillsong" to "The Gladsong," these musicians and venue owners are taking a dig at the "double standard" in COVID-19 restrictions.

A large group of Australian musicians have joined forces to form a new superband called “Thrillsong,” taking aim at the perceived double standard in the enforcement of COVID-19 restrictions after a video of a Hillsong gathering went viral.

In a video posted to social media on Thursday night, prominent Australian artists satirically rebranded to a Hillsong spinoff, stating: “We’re ready to play your next religious or sporting event in NSW.”

“Thrillsong will be performing live exclusively to huge crowds at churches, sports stadiums, race tracks, casinos, private islands, but absolutely no festivals, no pubs, no clubs or regular music venues because ... that would be different?”

Thrilled that @eilishgilligan is pivoting to songs of worship at hillsong (this is funny) pic.twitter.com/uLXCoSeW3w

Some of the artists were slated to play at this weekend’s now-cancelled NSW leg of the Grapevine music festival in the Hunter Valley. Festival organisers estimate that $5.2m will be lost to the greater Hunter Valley region, with 1,400 jobs and 16,000 ticket holders affected.

“We firmly support measures to protect our fans and communities and to safeguard our health care workers, we simply ask that if rules are made, they apply to everyone equally,” Thrillsong commented.

“We need to be in this together.”

The protest comes after pictures and videos posted on social media this week showed crowds at Hillsong Youth Summer camp singing and dancing without masks in scenes some users likened to a music festival.

In the same week, multiple festivals in NSW were cancelled after a ban on singing and dancing at indoor and outdoor events was brought in to mitigate skyrocketing case numbers. Under the public health order, the ban does not apply to religious services, but it does apply to major recreation facilities.

Following the string of cancellations due to the COVID-19 Omicron surge, entertainment industry leaders renewed calls for a federal insurance scheme for live events.

Health Minister Brad Hazzard said the Hillsong camp event was "clearly in breach of both the spirit and intent of the order".

NSW premier Dominic Perrottet has since called for Hillsong to be fined for flouting "the spirit" of COVID-19 public health orders and NSW Health has confirmed the summer camp in Newcastle has been cancelled for the breach.

A Hillsong spokesperson on Friday defended the event, and in a statement said the time spent singing was minor.

"Hillsong Church has always abided by public health orders as directed by each government, and takes COVID safe procedures very seriously for all services and events," the statement read.

"Ensuring the safety of those attending Hillsong events, and supporting the wider community effort to keep Australia safe, are both priorities for our church." 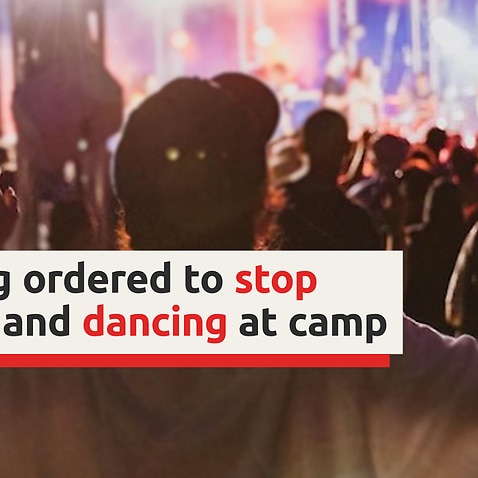 It’s not the first satirical protest that has cropped up in recent days. A popular inner-city Sydney pub will pose as a church for a one-off “Sunday Service” to voice similar concerns.

The Lord Gladstone Hotel will transform into ‘The Gladsong’, complete with jugs of Holy Water (beer) and DJs playing in the courtyard all day.

The Facebook event page describes the Gladsong Hotel as Sydney’s “newest and most poppin’ religious institution”.

“This event is to highlight the inequality being shown to live music venues across the country while religious organisations get to carry on under a different set of rules – all Covid restrictions will be followed currently in place on our venue,” the event page states.