For pop-culture critic Dr Lauren Rosewarne, the notion that "we know what dogs are thinking; what they would say if they could speak", is a uniquely human arrogance.

I love dogs. This love, however, isn’t a love without limit. I have a serious problem with talking dogs.

A couple of years ago I spent 18 months watching 1000 Christmas films for a book. Some of the most awful ones were the ones featuring dogs. From Lady and the Tramp to The Dog Who Saved Christmas to A Doggone Christmas these are not good films. These are films about anthropomorphised animals: sometimes wearing clothes, sometimes saving kids from wells, almost always with the talking. Talking dogs is a stupid concept that flatters the ego of humans. I get it, but I hate it.

When I saw Isle of Dogs I tried my best to enter the screening with an open mind: to, notably, keep my expectations modest. I saw The Adventures Milo and Otis when it first came out in 1986 – I knew, even at six-years-old - that that was a nonsense film. (That was before I found out about all the alleged animal cruelty). Cats don’t put their “arms” around dogs; dogs and cats don’t “team up for adventures”. Dogs, hopefully, don’t have voices that sound like Dudley Moore. But I couldn’t hold tight to my Milo and Otis knowledge. I got too excited. I got too distracted by the fact that it was a Wes Anderson film; Wes, who had directed one of my all-time favourite films, The Royal Tenenbaums.

Like parents who see their own kids as blessed angels and every other child as unruly – our own weird dog behaviour is perfectly fine; it’s everyone else’s that’s grating.

Something I understood at six years old watching Milo and Otis – probably sketchily, but understood nonetheless – was the arrogance of humans thinking we know what dogs are thinking; what they would say if they could speak. Dog weddings really encapsulate my thinking here. Has anyone asked the dogs about their view on betrothal? Do dogs want to enter arranged marriages? Do they really want to wear modified versions of human wedding outfits? At any point do we stop to think about their consent?

It’s not like I don’t understand the impulses, mind you. The first Christmas that my family had Zelda the cocker spaniel, I procured her a highly excellent elf costume which she hated wearing with every fibre of her fur being. But she looked so cute! 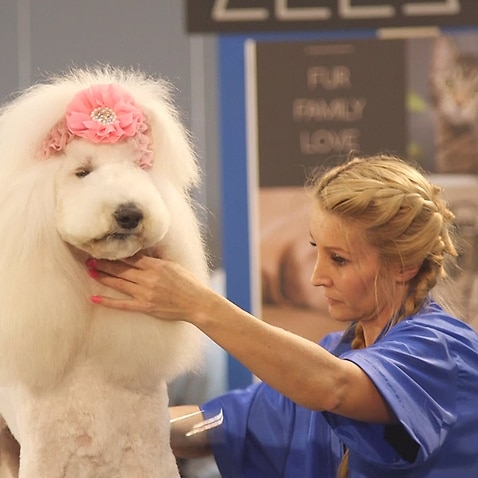 'Their medium is a fur canvas': Australia's master dog groomers

On an individual level, we dog lovers engage with all kinds of peculiar behaviour: dressing them up, doing their voices, applying a human logic to all their idiosyncrasies (“she just doesn’t like change” “she’s never liked men”, “she’s in a mood, don’t worry about her”). But like parents who see their own kids as blessed angels and every other child as unruly – our own weird dog behaviour is perfectly fine; it’s everyone else’s that’s grating.

The Isle of Dogs animation is truly terrific, but there was a lot not to love. At 101 minutes, I felt like a good half-hour was just rambling. And I’m not sure whether my attention was drifting or whether the narrative was problematically convoluted in parts. I left the cinema thinking – as I did when I left a screening of Moonrise Kingdom – that sometimes Wes Anderson just seems to be doing Wes Anderson and trying to recapture a nostalgia for his first films.

But mostly it’s just about the dogs. I bloody hate talking dogs.

Lauren Rosewarne is a Senior Lecturer at the University of Melbourne. She is the author of nine books and is a co-host of ‘Stop Everything!’ on Radio National.