The Feed investigates who’s behind some of the questionable campaign materials and why they chose to send them out. Things get weird.

VIDEO ABOVE: Fake election material is wrong but also legal? (The Frant)

We think it's pretty safe to say that this was a particularly nasty election, especially when it comes to campaign material.

A number of examples of pamphlets, posters and mail sent to The Feed reveal the significant lengths campaigners (party or private) will go to, to secure your vote - or to discourage you from voting for someone else.

The Feed attempted to trace a few of them back to the source. Which is, uh, not as simple as you'd first think.

The curious case of the Wentworth robo-emails

For Laura in Melbourne, election campaigning was particularly personal, painful and bizarre.

On May 14, she received a 'sickening' email, containing a number of homophobic comments targeted at a candidate thousands of kilometres away - Wentworth electorate Independent, Dr Kerryn Phelps.

"I found it pretty upsetting - I thought other people would have found it upsetting too."

The Feed has exclusively obtained a copy of the original email. In the message, an 'Ashley Stevens' tells the recipient to call on their friends in the Sydney electorate to vote for Liberal Candidate Dave Sharma.

The email, sent to Melbourne resident Laura, called on her to ask her friends to vote for Liberal candidate, Dave Sharma.
The Feed

"He belongs to Indian heritage, and he can use swastika legally, LGBT are afraid of swastikas, they will be expelled from our country! " the email read.

We have to save Australia!

'Ashley' even names Dr Phelps' three children that she shares with her female partner. The message is riddled with a number of homophobic comments.

"Just like we cursing people to be pigs or dogs, the LGBT are no better than pigs or dogs"

Laura said she was 'shocked and disturbed' by what she read.

The emails contained a number of homophobic and incorrect comments.
The Feed

I was absolutely sickened by it. I'm part of the LBGT community. It just brought back the whole yes campaign again.

The email was sent to Laura's work and personal accounts. She says the same message was sent at least another five times, under different email addresses. She's concerned those behind it may have bought a mailing list.

Laura referred the matter to office management, but did not send to the AEC.

The Feed can reveal the message came from a 'gcb.com.au' - registered to a 'Global Commodities Brokerage Co Pty Ltd'.

Burger Digital, the agency hired by 'GCB' to host the site, could not confirm with The Feed that the email had been sent from the page.

'Global Commodities Brokerage Co Pty Ltd' has an ABN. An Australian Business register search reveals the company is based in Brisbane - thousands of kilometres away from both Ms Phelps' electorate - and Laura in Melbourne.

The email was sent to Laura's work from an 'Ashley Stevens'.
The Feed

The Feed was unable to get in contact with a representative of GCB. A phone number listed as belonging to the business diverted to an automotive service who had no knowledge of the group.

Here's where this whole saga gets a little stranger.

The number of other - identical - emails forwarded to Laura come from a range of different names and email addresses. A quick search shows they're from different locations. 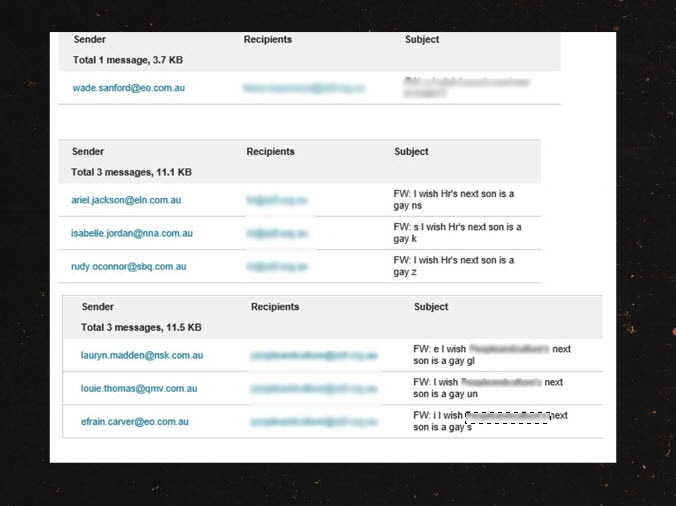 The emails were sent from a number of different sources, to several email accounts Laura accesses.
The Feed

This is not the first time Dr Phelps' campaign has been caught up in problematic email chains. In early May, the campaign referred a number of misleading emails to the Australian Federal Police.

They claimed Dr Phelps was ineligible to stand for election, and included a number of anti-Semitic comments.

The Australian Federal Police told The Feed its investigation into the emails was ongoing.

"It would be inappropriate for the AFP to comment further."

We also reached out to Dr Phelps' team for comment, but did not hear back at time of publishing.

So where the heck is the AEC in all of this?

Long (and kinda depressing) story short - there's not a lot the Australian Electoral Commission can do about this.

As Feed host Jan Fran discovered, this year the AEC received 500 complaints. It found 87 breached electoral law, but did not take punitive action on any. Instead, it issued warnings, which it says were able to effectively and quickly resolve the issues.

The commission does have the power to take people to court over things like this, but it's only done so once before.

You can't do much short of shutting the internet down at election time.

“More babies will die under a Labor government”

It's flyers like these that are cause for concern for the AEC.

Labor's reproductive health policies were the target of a campaign that claimed Opposition Leader Bill Shorten was pushing for 'extreme late-term abortion laws' if elected. 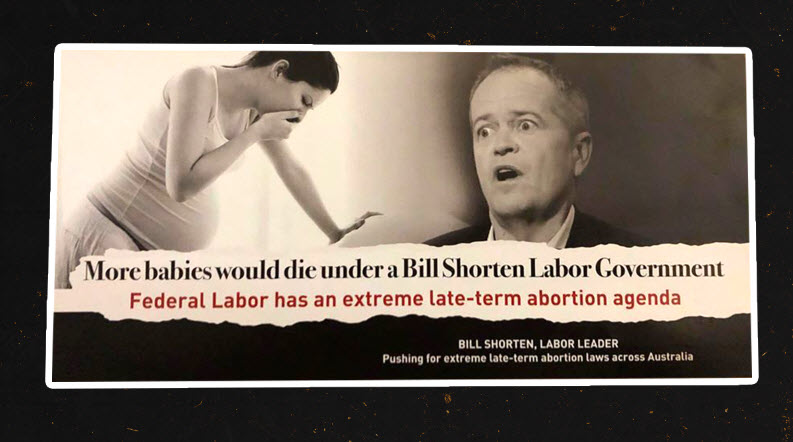 This flyer, from a Queensland anti-abortion group, was sent to letterboxes as far as South Australia.
The Feed

"More babies would die under a Bill Shorten Labor Government' the flyer read.

Photos of the campaign material were sent to The Feed by readers in both New South Wales and South Australia - once again, thousands of kilometres from the group that organised them.

Just received a disgusting flyer in our letterbox falsely asserting Labor has a proposal for late-term abortion right up to birth. It is purportedly authorised by G. Duffy of Pro-Life Victoria. Laws needed to stop the circulation of lies like this. How low can you get?

The material was authorised by Cherish Life Queensland, an anti-abortion lobby group. The group is also behind 'Put Labor Last' web page. The reverse side of the flyer, which called on voters to 'put Labor last' due to the party's abortion policies.
The Feed

"With Bill Shorten as PM, late-term abortion, right up to birth, for any reason, would be legal around Australia," the site claims.

The Feed reached out to the group for comment, but did not hear back at the time of publishing.

As advocates for the right to life and protectors of unborn human life we simply had to act, and act big.

Claire Pullen, Our Bodies Our Choice Chairperson, says the campaign did not come as a surprise.

"Anti-choice activists in Australia have made it clear for some time now they are taking their tactics from the United States, and that includes outright lies. "

She says the claims made in the materials show how desperate anti-choice activists are.

This is a scare campaign: inaccurate, inflammatory, and wrong, and designed to mislead and frighten.

Did you see other campaign material that you found questionable? Email us: thefeed@sbs.com.au