Making the call on the best approach to giving birth can be difficult, especially when the opposing viewpoints are so polarising.

In the leafy Sydney suburb of Vaucluse, fifteen couples have come together for a two day workshop to learn breathing exercises, acupressure techniques and the A to Z of giving birth naturally. “These are the things that women have been using since the beginning of time. These natural, innate tendencies we have to manage birth,” Nadine Richardson tells the class.

Nadine is the founder of She Births, a private course for expectant couples hoping to give birth without medical intervention. “I think we're being fed a huge amount of negativity about birth.  Most of us have got to our 30’s or 40’s … and we've not heard anything positive.” 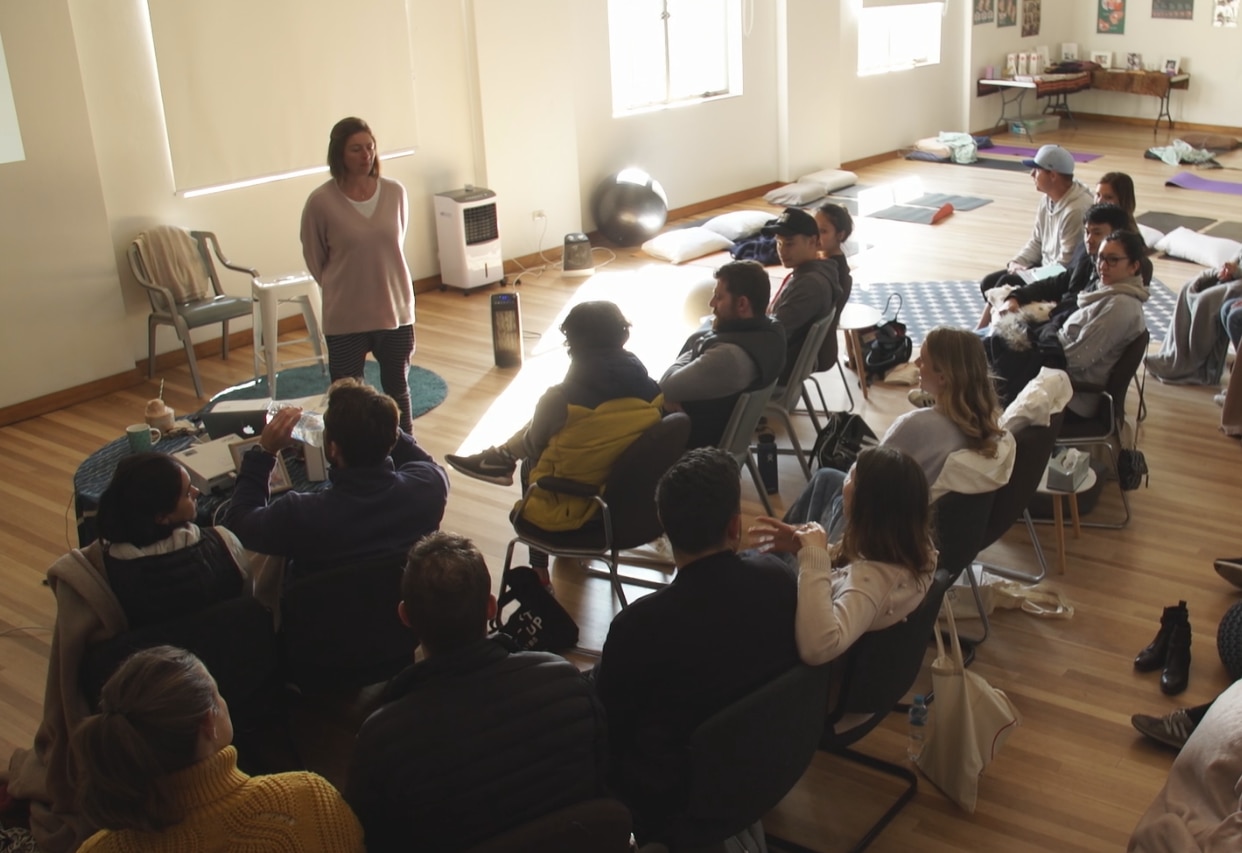 Nadine Richardson, founder of She Births

The debate over the best way to give birth has never been more polarised. On one side of the divide are those promoting the virtues of so-called ‘natural’ or ‘normal’ birth.  At the other end are those who warn that vaginal birth carries risks, especially as women are increasingly becoming mothers later in life.

For the majority of women giving birth in Australia today, medical intervention is the norm. This might mean using drugs to induce or speed up labour, or epidurals to block the pain – an option that more than half of women go for.

For some, the prevalence of these interventions is a major cause for concern.

“One of the problems with intervention is what we call a cascade of intervention,” says Hannah Dahlen, Professor of Midwifery at Western Sydney University. “So for example you might induce a woman and that may lead to more painful contractions so she has an epidural. Now it's hard for her to push, now she ends up with forceps or a vacuum or perhaps a caesarean section.”

In 2010, the New South Wales government put itself at the centre of the birth debate when it introduced Towards Normal Birth – a policy that Professor Dahlen helped develop. “The caesarean section rate had reached about 28 per cent and we were all really horrified. Where were we going and where would it stop?”

The NSW Health policy aimed to reduce the caesarean section rate to 20 per cent by 2015 and have 70 per cent of pregnancies deliver without medical intervention.

After giving birth to her first child through caesarean section, Wollongong mum Kate Shield wanted her second pregnancy to deliver vaginally. But when Kate went into labour, things didn’t go to plan. She was given drugs to speed up contractions and then an epidural. Kate says she didn't feel she was presented with a choice.

There was no emergency. The doctors have a god complex and they just want to be the puppeteer.

When it came time to give birth to her third child, Kate was determined to have a vaginal delivery. But with scarring from two previous caesareans, her uterus ruptured during labour and she was rushed in for emergency surgery.

All three of Kate’s children are now happy, healthy youngsters. But she can’t help but wonder what might have been, had she been given the right information, at the right time.

In formulating the Towards Normal Birth policy, Professor Dahlen says the New South Wales government took their cues from the World Health Organisation, which recommends that a caesarean rate of 10-15 per cent is ideal. “Beyond that we see no advantage and we start to see harm to mothers and babies,” Professor Dahlen explains.

But not everyone agrees we should be trying to reduce caesareans.

Professor Peter Dietz is a urogynaecologist specialising in pelvic floor damage. He believes that institutional pressure to avoid caesareans has meant more babies are being delivered with forceps. They’re like a hospital version of barbeque tongs used to forcefully pull the baby out of the birth canal, when doctors determine that it won’t come naturally.

Across NSW, the use of forceps has increased from 3.1 to 4.7 per cent between 2005 and 2016. But at some major Sydney hospitals it’s gone even higher, quadrupling to over 10 per cent. Professor Dietz warns that forceps can cause major, irreversible damage that can be irreparable.

“If somebody has her baby with a normal delivery in one of our hospitals here in Sydney the likelihood of a major pelvic floor muscle tear is about 10 per cent. If she has that baby by forceps, it's over 40 per cent.” Amy Dawes knew nothing about the risk of using forceps.
SBS

It’s a statistic that Amy Dawes knows all too well. The mother of two was 33 when she had her first baby at a public hospital in Sydney. Amy says she knew the risks involved with a caesarean, but knew nothing about the potential risks of forceps. But in the stress of the delivery room, doctors recommended forceps as the best option. Amy’s daughter was born happy and healthy, but the birth took its toll on her body.

“I was told at the time that I had sustained a third degree tear but they were also having trouble stemming the bleeding. I was thinking, ‘Is this what death feels like’?’”

A pelvic health physiotherapist later diagnosed her with a bilateral evulsion, where the pelvic floor muscle is torn off the bone.  “I was suffering from faecal incontinence. I need to carry wet wipes, not just for my baby. I'm now 37 and I feel in some ways like I'm 80,” says Amy.

Reducing the use of forceps might be the one thing that all camps can agree on.

Professor Hannah Dahlen also believes their use should be faded out. But she says the answer isn't to increase caesarean sections, but to expand midwifery care.

“Midwifery care leads to less intervention, fewer forceps, fewer vacuums, less pain relief needed, and lower cost. So what is so difficult to get about this?”

A major review of global research by the Cochrane group of scientists found that women who have babies through midwife-led services are more likely to have a vaginal delivery without medical intervention.  They are also more likely to be satisfied with their care. But the review also found that midwife-led care doesn’t lower a woman’s chance of needing a caesarean, or of tearing during labour. And for complex or high-risk cases, having an obstetrician on hand can be the difference between life and death.

“The midwives talked about it as being such a wonderful, serene joyful experience, I just thought that's what I'd have. I wasn’t educated on what could go wrong,” says Danielle Johnson from her home in the Sydney suburb of Ryde.

Danielle was one of the 8 per cent of women in New South Wales to have a midwife-led delivery. She gave birth in a pool, without medical intervention, through a stand-alone midwifery service in Sydney.

“I gave birth to my daughter and they brought her out and put her up on my chest which still is like the best moment of that whole experience,” says Danielle. “What I didn't know at the time was I'd had quite a lot of blood loss. I just kept bleeding and they didn't know where it was coming from.”

After two hours, Danielle was transferred to the nearest hospital, about 15 kilometres away, where she was treated for external and internal tearing. A year on and the experience is still an emotional one. Tears roll down her cheek as she explains, “I feel like they, the midwives, waited too long to transfer me, I feel like they should have realised sooner that it was above their capability.”

Doctors have since told Danielle that quicker treatment may have improved her outcomes. Twelve months on, the tearing she experienced still plagues her.

It's still painful to do yoga, painful if I stand up for too long: there’s a throbbing. And obviously intercourse is painful.

It’s cases like Danielle’s that leads Professor Deitz to conclude that midwives aren’t equipped to provide patients with the right information for ‘informed consent’. He says the NSW government’s Towards Normal Birth policy, that aimed to increase the rate of natural births has comprehensively failed.

Professor Dahlen says the policy has been hampered from day one by a number of very vocal critics within the medical profession. “Obstetricians see more midwifery care as a threat to their own incomes and their own practice.”

The Toward Normal Birth policy is now under review. The Feed invited NSW Health to respond to claims that the policy has increased the use of forceps, leading to more birth trauma. We did not receive a response.

For further reading, check out two opposing stances, in their own words: