It was Valentine's Day 1977 when Edwin John Eastwood broke into a regional school in Victoria and kidnapped a teacher and his students at gunpoint. It would be up to Robin Smith - who this week was given an Australian Bravery Award - to save them all.

The 14th of February 1977 should have been just another day for Robin Smith, but it remains the most significant day of his life.

The then-25-year-old logger from regional Victoria was driving home in his trailer on the winding roads of South Gippsland with his younger brother when a van came speeding around a corner and crashed into their rear.

Now 68, Robin told SBS News that the harrowing details of what happened next would change his life forever. The crash prompted a sequence of events that would force him to risk his life to save himself and 15 other hostages from a dangerous gunman.

'He just stuck a gun at my head'

Escaped prisoner Edwin John Eastwood had that day broken into a small regional school in Wooreen, Victoria, and took a teacher and his nine students hostage at gunpoint.

Forcing them all into his van, Eastwood had planned to drive the victims to an unknown location, but his reckless driving caused him to run into the back of a large trailer, totalling his vehicle.

It was the trailer belonging to Robin. “When Eastwood came towards us with the van, he was travelling pretty quick for that sort of road, there are lots of blind corners. But he was just going too fast and he drove straight under my trailer,” Robin said.

Robin and his brother quickly clambered out of their vehicle, immediately concerned for the other driver's safety, but it didn't take long for them to realise this was no ordinary accident.

“He just climbed out the window [of his van] like a mad man and just stuck a gun at my head," he said.

“So I knew then I was involved in something that wasn't real good.” 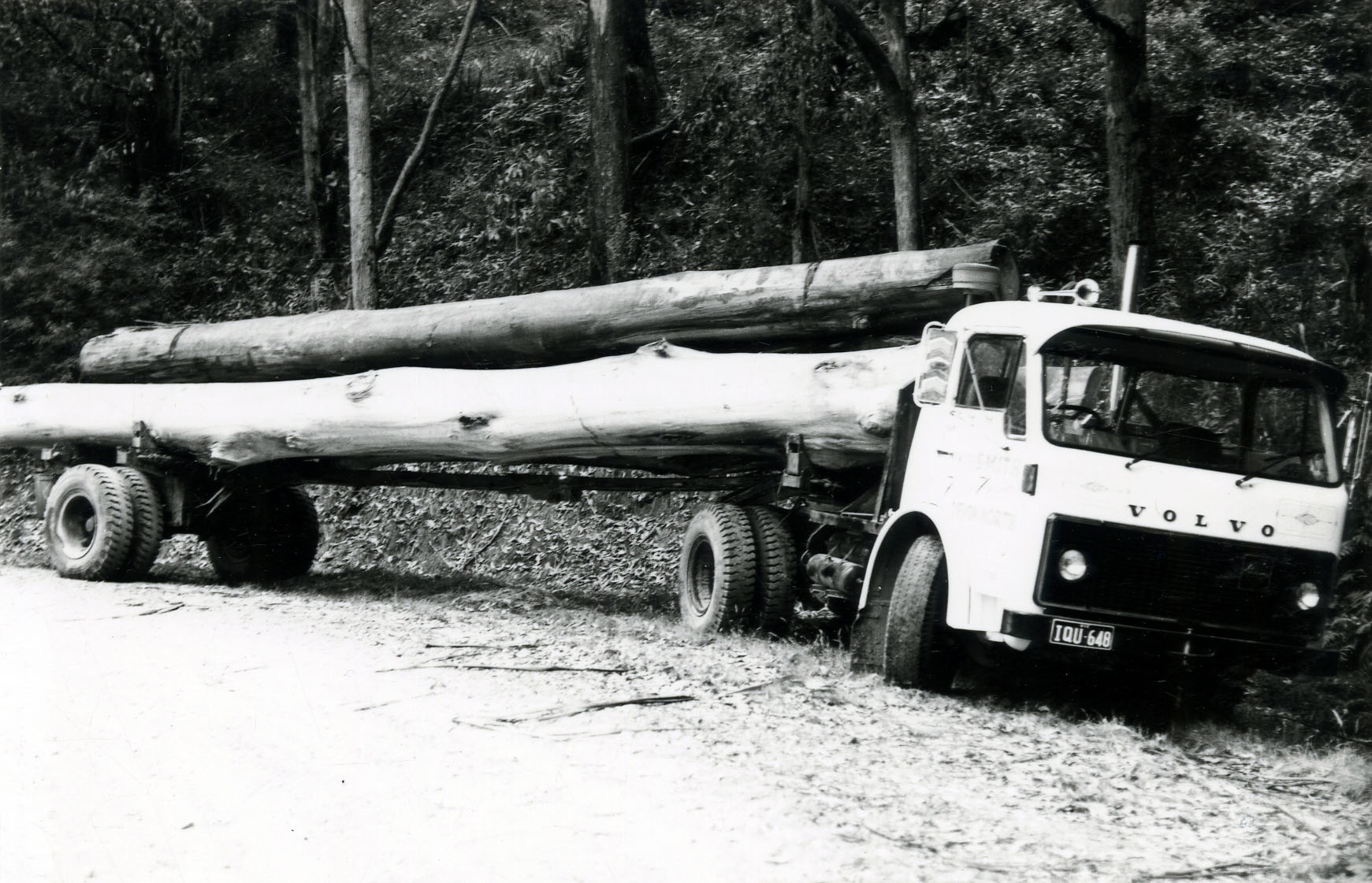 Robin Smith's trailer that was crashed into by the assailant.
Supplied.

Eastwood forced the two men behind the crashed van at gunpoint and that's when they first saw the nine school children chained together by the road, as well as the teacher who was locked in the front seat of the car, blindfolded and gagged.

“He had chains and padlocks and he just chained us up to the back of the truck away from the roadside so no one could see us.”

It wasn’t long before two more vehicles pulled over to help what they thought was an innocent crash. The two male truck drivers and two female travellers were also taken hostage.

“When they pulled up he took them hostage at gunpoint and brought them over and tied them up where we were as well,” Robin said.

'He had a campsite set up in the bush'

Eastwood, who now had 16 hostages, bundled them in the back of a Kombi van owned by one of the women and drove them for what Robin said seemed like hours into dense bushland.

“It was a long way from where we were, we travelled for a good while in that Kombi van ... he had a camp set up back in the bush,” he said. The Kombi van that was used to transport the hostages.
Victoria Police

According to police, Eastwood’s plan was to hold the victims for ransom.

He had sent a letter to Victoria’s education minister demanding the release of 17 of the state’s most dangerous inmates, as well as an arsenal of weapons, seven million US dollars and a supply of illicit drugs.

It wasn't the first time Eastwood had done this either. Five years earlier he had carried out exactly the same crime, less than 300 kilometres away, kidnapping a teacher and six students from the Victorian town of Faraday before being arrested. Some of Edwin Eastwood's demands to the Victorian government.
Victoria Police

At the campsite, Robin and the other hostages were chained together around a tree and were only released to go to the bathroom, when Eastwood would accompany them at gunpoint.

As the hours wore on, Robin slowly worked on the chains around his hands.

His work as a logger meant he had experience tightening chains on trucks for many years and in the middle of the night, he successfully freed himself.

While Eastwood lay resting nearby, Robin told his brother who was chained up next to him that he would go to find help.

Waiting for the right moment, he escaped. 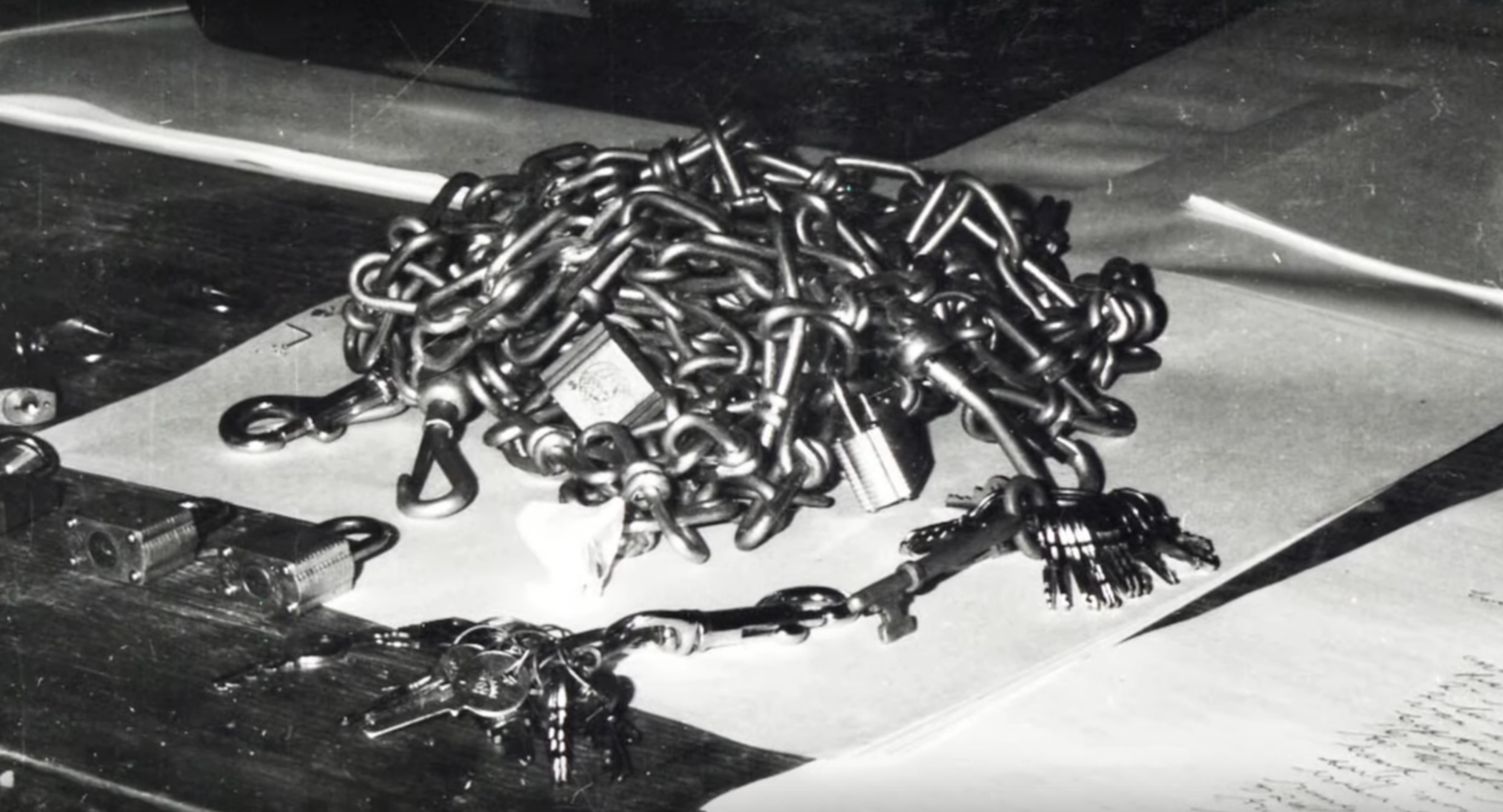 Some of the chains Eastwood used to chain up the hostages.
Victoria Police

“I just waited and waited for a bit of a breeze to come up to make some noise in the trees in case I stepped on a twig or something like that," he said.

“If he’d have put the torch on and seen me with my chain off he probably would have marched me over to the bush and shot me, I reckon.”

Sprinting through the bush, Robin ran more than 10 kilometres to a farmhouse he had noticed on the journey to the campsite.

Panicked and exhausted, he begged the owners to let him in to call the authorities.

After the police arrived, Robin was able to direct them back to the campsite, but it was too late.

Eastwood had noticed his disappearance and forced the remaining hostages back into the van.

It didn’t take long for police to locate the vehicle and a high-speed chase ensued, with Eastwood firing shots at the policemen. Robin witnessed the whole thing in the back of the police car.

“He wasn't shooting in the air or at the ground, he was shooting at them, you could see, he did that a couple of times,” he said. After an agonising, dangerous car chase, police were able to stop the vehicle and apprehend Eastwood, who had been shot in the leg.

All of the hostages were saved, and most were uninjured, including Robin’s brother.

'His bravery was exceptional'

While Robin doesn’t acknowledge it, the other hostages, as well as the police, have long called Robin a hero for his actions that day.

Now, 43 years on, Robin is the recipient of Australian Bravery Award, which honours dozens of citizens who in a moment of danger or threat have acted selflessly and courageously. The awards, which are announced twice a year, recognise the courage, sacrifice and selflessness of recipients, many of whom are everyday members of the public who do extraordinary things, just like Robin.

From police officers to fishermen, truck drivers to total strangers, 83 Australians have been honoured in this year's first list.

Rob Hunter, the teacher kidnapped that day, has never forgotten Robin’s bravery and credits him with saving his and his students' lives.

“When someone saves you from possible death, you can't help but think incredibly fondly of them, and his bravery was exceptional,” he said.

“If Eastwood had woken up when Robin was escaping, Robin would have had a bullet through his head, for sure.” Some of the children enjoying some snacks after being rescued.
Victoria Police

Mr Hunter was just 20 years old at the time and only nine days into his first teaching job.

“It was trauma to the first degree for everybody who was involved and Robin's heroism short-circuited that," he said.

“We all have fond thoughts, particularly about Robin, but also the police for saving us.” Some of the hostages at the 40-year reunion - the first time they had met since 1977.
Roy Fisher

In 2018, Mr Hunter released a book called Day 9 at Wooreen, which details the events of that day. He now runs talks on how to overcome trauma.

Eastwood was sent to prison for 18 years. He was released in 1993 and reportedly changed his name.

At a 40-year reunion, all but a few of the hostages met for the first time since the incident.

It was there that Mr Hunter was able to thank Robin in person for his bravery during the 21-hour ordeal, sentiments echoed by the students and other hostages involved.

The event was also the catalyst for Mr Hunter, along with some other leaders in the community, to come together and nominate Robin for the Australian Bravery Award. Robin at the 40-year reunion - congratulated by the audience.
Smokey Oscar

Mr Hunter said he is over the moon that Robin’s efforts have finally been recognised.

"He's a quiet, unassuming, humble character. But he's astute and he's wise and his behaviour throughout that ordeal was impeccable."

Robin, who now resides in Lightning Ridge, a small town in north-western New South Wales, is still working as a miner.

He said he is very surprised to be receiving the award and while he's not terribly comfortable at being in the spotlight, he is thankful to those who thought of him. He still doesn’t consider himself a hero but is glad his actions meant everyone was able to go home to their families that day, he said.

"Everyone would have been affected in some way, you can't go through that sort of thing without being affected one way or another.”

“But at least everyone has been able to still go on with their lives.”

Ceremonies for the Australian Bravery Awards will be held at state government houses later in the year for recipients to receive their medals.