It's one of the world's most enduring and tragic conflicts, but how did the Israeli-Palestinian conflict start, and what does the future hold? 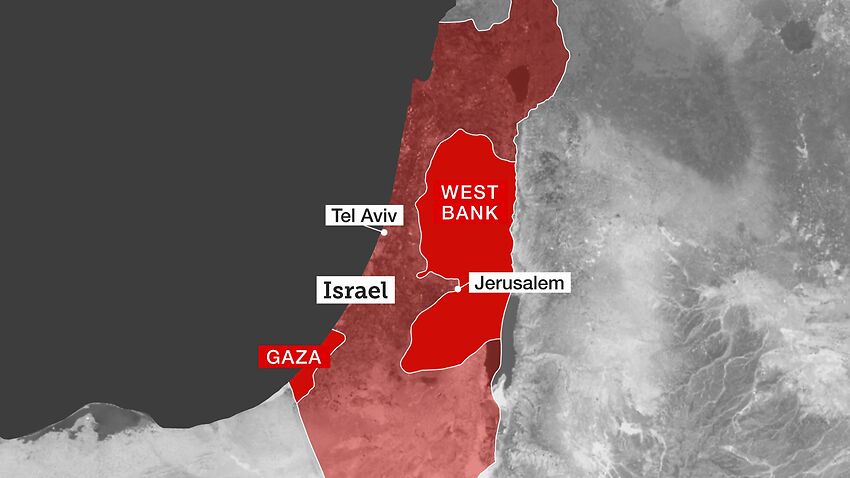 Recent weeks have seen a significant escalation in fighting between Israel and Palestinian militants, with attacks from both sides prompting the United Nations to warn of a potential "full-scale war".

The long-running tensions began to flare up again in April during the holy Muslim month of Ramadan and with the threatened evictions of some Palestinian families in Jerusalem.

The first week of renewed violence saw nearly 200 people, many of them children, killed in Gaza, according to its health ministry. Israeli authorities reported a dozen people, including two children, dead in Israel.

Confused by how things got to where they are now? Here's an SBS News story, first published in 2018, explaining the historical forces at play.

How did the conflict begin?

Since the end of the Second World War, the bitter struggle between Israelis and Palestinians has been one of the world’s most tragic and intractable conflicts. It’s a complex mess, but on one level, it’s very simple.

“It’s a fight about territory, simple as that,” Dr Gil Merom, an international security expert from the University of Sydney told SBS News.

The roots of the conflict go back to Biblical times, but from a modern historical perspective, the late 1800s and early 1900s were central to the situation that exists now.

Between 1882 and 1948 a series of Aliyahs took place (large-scale movements of Jews from around the world to an area, which from 1917, officially became known as Palestine).

The push for a Jewish state intensified after the Holocaust. Pictured: The Auschwitz concentration camp. Source: Getty Images

In 1917, shortly before Britain became the colonial power in Palestine, it issued the Balfour Declaration which declared: “His Majesty's Government views with favour the establishment in Palestine of a national home for the Jewish people, and will use their best endeavours to facilitate the achievement of this object".

The Palestinians rejected the move but history was not in their favour.

Following the horrors of the Holocaust in which up to six million Jews were killed in Europe, the push for a Jewish state became ever stronger.

In 1947, the United Nations voted to split the contested territory into three parts; one for Jews, one for Arabs, and an international trusteeship regime in Jerusalem.

The Arabs did not accept the deal, saying the UN had no right to give away their land. War broke out.

The Palestinian narrative says Zionists (those who support the re-establishment of a Jewish homeland in Israel) then began forcing people from their homes.

The Israeli version points out there were Arab leaders who encouraged the people to leave and that some Arabs left voluntarily.

Circa 1948: A prisoner-of-war camp outside Jerusalem built to house Arab prisoners during the Arab-Israeli conflict. Source: Getty Images

The bloody 1948 Arab–Israeli War saw 700,000 Palestinians flee their homes - a mass exodus known as the 'Nakba', Arabic for 'catastrophe'.

But there were also Palestinians who stayed in Israel, and by 2013 Israel’s Central Bureau of Statistics estimated the Arab Israeli population was over 1.6 million, or about twenty per cent of Israel’s population.

The 1948 war is significant because it remains a central, unresolved part of the ongoing conflict.

Israel gained control of all the disputed territory except the West Bank - Jerusalem’s eastern quarter (controlled by Jordan) and the Gaza Strip (controlled by Egypt).

And the descendants of those 700,000 Palestinians, who have spent generations living in refugee camps, now number around 4.5 million according to the UNRWA, a UN agency dedicated to Palestinian refugees.

The Palestinians’ central demand in peace talks is for a “right of return” for these descendants to the homes their families abandoned in 1948.

There was another major war in 1967, in which Israel defeated Egyptian, Syrian and Jordanian forces in a conflict that lasted just six days and resulted in Israel taking the West Bank and East Jerusalem from Jordan.

It has controlled these territories ever since.

The area is considered by the UN the Palestinian territories and many other countries to be “occupied” land, while Israel considers it to be “disputed” territory and wants its status to be resolved in the peace negotiations.

Why hasn't peace been achieved?

Called the Oslo Accords, the deal also created a Palestinian Authority which had some limited self-governance powers in the West Bank and the Gaza Strip.

It was an interim agreement ahead of what was supposed to be a comprehensive peace deal within five years.

That didn’t happen. There was a failed peace summit hosted by the US in 2000.

A visit by Ariel Sharon - the man soon to be Israel’s Prime Minister - to the Temple Mount in East Jerusalem was seen by Palestinians as an assertion of Israel’s sovereignty over the Al-Aqṣā Mosque, Islam’s third holiest site, and was one of the main reasons which lead to the second intifada (violent uprising) of Palestinians.

Over the next five years, there were around 3,000 Palestinian and 1,000 Israeli casualties, among the latter many civilians killed in suicide bombings.

April 2013: The victims of an attack during the second Intifada are remembered in a ceremony at the Victims of Terror memorial in Jerusalem. Source: Getty Images

The consequences were profound.

The Israelis retreated from Gaza, and by the mid-2000s Hamas, a Palestinian Sunni fundamentalist faction regarded as a terrorist organisation by many countries, took over the coastal territory.

Fatah, the more mainstream Palestinian organisation, remained in control of the externally recognised Palestinian Authority, based in the West Bank.

Hamas used Gaza as a launching pad for intermittent rocket or mortar attacks across the border, hardening the Israeli public’s views.

“It made Jewish Israelis even more opposed to any kind of agreement with the Palestinians,” Dr Merom said. “The logic was: if we gave them a territory and all they do is make it a base to assault or attack Israeli settlements, then what kind of a deal is it?”

Accordingly, Gaza was put under Israeli military blockade which limited supplies of food, water and energy for its 1.8 million residents. The living conditions for these Palestinians have been described as the world’s largest outdoor prison.

Israel became an undeclared nuclear power by the mid-1980s and, with the backing of the US, built up one of the most formidable defence forces in the world.

Assistant Professor Maha Nassar, from the School of Middle Eastern and North African Studies at the University of Arizona, argues the US support of Israel has been one of the main reasons the conflict has proved so difficult to resolve.

“The most powerful party involved - the United States - has consistently sided with Israel over the Palestinians and has pressured the Palestinians to give up their basic right to self-determination,” she told SBS News.

“They have done this in many different ways, most notably by offering Palestinians a ‘statelet’ that doesn't have any real control over its own borders, water, defence, or population. The Palestinians have never been offered a viable, contiguous, fully sovereign state.”

What about a two-state solution?

The Israelis would never accept the Palestinian refugee diaspora right of return to Israel, because doing so would essentially change the nature of Israel to a Jewish minority state.

This has evoked uncomfortable comparisons with South Africa under apartheid, including in a 2017 report by the United Nations Economic and Social Commission for Western Asia and even in the past by former Israeli politicians.

Israelis criticised the apartheid comparison made in the report. Emmanuel Nahshon, spokesman for Israel's Ministry of Foreign Affairs, compared it to a Nazi tabloid and flagged that UN Secretary-General António Guterres had not endorsed the report.

A two-state solution is generally mooted as the only long-term viable one. But there are a lot of obstacles to it.

The problem of Jerusalem

First among these is Jerusalem.

The Trump administration’s decision to move the US Israeli embassy was considered to be symbolically significant.

While the US officially takes no position on borders, the move heightened tensions as it was considered to indicate support for the Israeli position on Jerusalem.

“This move means the end of the two-state solution,” Professor Nassar said.

“That's because one of the core principles [on the Palestinian side] is that East Jerusalem would be the capital of a future Palestinian state.”

“With this move, the US has clearly sided with Netanyahu's stance, ending any hope of a Palestinian state with its capital in East Jerusalem.”

But Jerusalem and its status is not the only barrier, even though, Dr Merom said, virtually all stakeholders except Hamas are committed to a two-state solution in theory.

Other major obstacles include the precise location of the border; the fate of the Palestinian refugees (whether or not they can have the right of return); and the question of Jewish settlements in the Palestinian territories - where almost half a million Jewish Israelis have now built homes in what the UN and most of the international community considers illegal settlements.

Professor Hassar said peace would be impossible until Palestinians were “treated as equals with the same rights to freedom and dignity as everyone else.”

Dr Merom said Mr Netanyahu, the subject of corruption and bribery investigations, is ideologically opposed to Palestinian statehood, and in Dr Merom’s view, in thrall to his political base on the right-wing who oppose any compromise on the Palestinian issue.

Mr Netanyahu has won five elections, and remains popular in the polls despite the corruption probes.

Palestinian protesters clash with Israeli troops in May. Source: Getty

As for prospects for future peace, no one is overly optimistic in the short to medium term.

The Israeli army and Palestinian militants in the Gaza Strip have fought three wars since 2008 and fears remain of a fourth.

UN envoy to the Middle East Nickolay Mladenov warned in May 2019 "the risk of war remains imminent".

"Everyone is extremely nervous; everyone in the situation is very fragile," he said.

The risk of war remains imminent

And Dr Merom points out that the ranks of secular moderates on both sides have been diminished and the radicals have gained ground following years of fighting and losses on both sides, albeit considerably more deaths on the Palestinian side.

“Jewish settlers and Hamas, both of them say ‘everything is mine’,” he said.