The kids who sued the Colombian government and won

How did a group of activists – one as young as seven – make their voices heard? 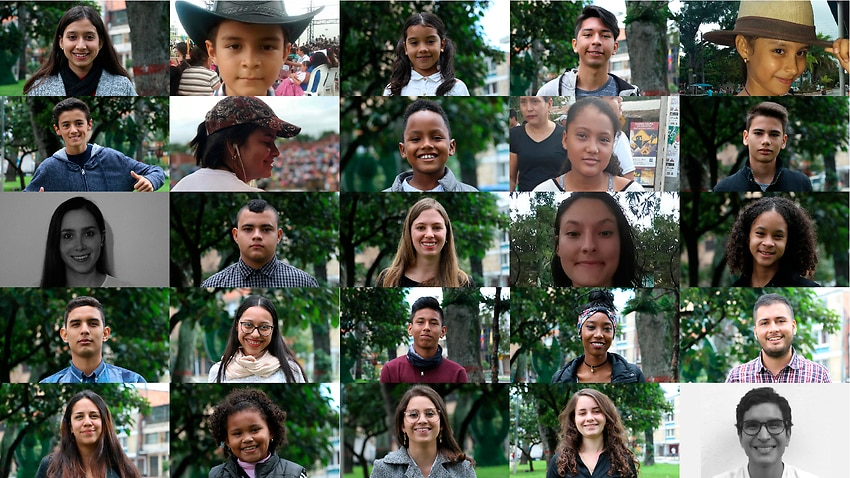 The group were aged between 7 and 26. Source: Supplied

Pablo Cavanzo lives with his family in Bogota, the capital of Colombia.

Like many 13-year-olds, he enjoys exploring, particularly with the rainforest on his doorstep.

“I like to walk a lot to the mountains and trek and camp all around Colombia,” he told SBS News.

But even in his short life, Pablo has noticed the environment around him is changing. He says he is all too aware of how it could impact his future.

“When I’m bigger there’s going to more problems for me to live,” he told SBS News.

“In the future deforestation is going to affect me.”

Colombia is home to rainforests roughly the size of Germany and England combined, and its government has approved more land clearing than ever before. From 2015 to 2016 alone, deforestation rates in the Amazon region increased by 44 per cent.

Parts of the Amazon rainforest - which stretches across nine countries including Colombia - have been cleared to make way for agricultural land, coca crops (the raw ingredient for cocaine) as well as illegal mining and logging. But it is the deforestation itself that is of most concern to environmentalists.

Trees and plants store large amounts of carbon, so burning or clearing them releases greenhouse gas and accelerates the rate of climate change. Deforestation accounts for up to one-fifth of global man-made emissions, according to Greenpeace.

Smoke billows as fires burn in the Amazon rainforest in Brazil. Source: AP

Despite Colombia pledging to reach zero net deforestation by 2020 as part of the Paris climate accord, Pablo said the government was doing nothing to reduce the activity.

So, along with 24 other young people, he decided he would.

Pablo and a group of plaintiffs aged 7 to 26 successfully sued the Colombian government in the country’s Supreme Court earlier this month.

The group argued the government was failing to protect the Amazon, which was, in turn, contributing to climate change. Perhaps most importantly, they argued that continued deforestation violated their constitutional rights to a healthy environment, life, food and water.

“This is important to me because if I don’t protect the nature, who will?” Pablo said.

If I don’t protect the nature, who will?

In a first for Colombia, the Supreme Court ruled the government now has four months to present an action plan to reduce deforestation in the Amazon region, stating the country is facing “imminent and serious damage.”

Who are these 'kids'?

It was 26-year-old law graduate Gabriela Eslava who first came up with the idea to take on the government. A passionate environmentalist living in Bogota, she began looking into the extent of deforestation in the region with the guidance of local human rights organisation Dejusticia.

“We started this research one year ago,” she told SBS News.

“We followed the deforestation in the Amazon. We were very worried and we felt like we had to do something.”

After extensive talks with researchers and lawyers, something became plainly obvious to Gabriela; the older generation was doing very little to combat climate change.

“They’re not going to live it, so they don’t care,” Pablo said.

If young people wanted anything done, they had to do it themselves.

From Bogota, Gabriela reached out to young people across 17 different regions - those that are seen to be suffering the most from climate change.

From seven-year-old Acxan Guerrero from the coastal city of Buenaventura, to 15-year-old Andres Mancera from the region of Floridablanca, Gabriela began to form a supergroup of supporters.

She knew there was support out there for the cause: “People telling me about their little brother, or sister or cousins [in Colombia] who were worried about the environmental protection of our country,” she said.

But, she admitted, “We all felt our small and individual practices were not enough”.

By November 2017, Gabriela and the Dejusticia lawyers had gathered all 25 plaintiffs in Bogota for an official meeting, compiling research, arguments and case studies to take the government to court.

Each one submitted a story detailing how deforestation would affect their lives. One read: “By 2040 when I’ll be 30 years old, it will be unfeasible to swim at the beach that I live near”.

Another read: “I love biking, but the temperatures with be so high that I won’t be able to bike anymore”.

'They didn’t take us seriously'

Gabriela said filing a lawsuit as a young person was “stressful” and many judges dismissed their claims.

“At first, people didn’t take us seriously,” she said. “They just thought we were a group of children who wanted to attract attention.”

Winning wasn’t easy either. The group lost in the first instance in February, with claims their arguments were not strong enough. But after appealing to the High Court, they won, by “an inch,” Gabriela said.

“In this second instance there were seven judges, and it was very tight.”

“Four of them said they agree, and three disagreed.”

What did the court decide?

On 5 April 2018, the young activists received the Supreme Court’s ruling via email.

It read: “It is clear, despite numerous international commitments, regulations ... that the Colombian state has not efficiently addressed the problem of deforestation in the Amazon.”

The court agreed with the plaintiffs and ordered the presidency, the ministries for environment and agriculture, and local governments, to create an “intergenerational pact for the life of the Colombian Amazon”.

This means the government must now plan to reach zero net deforestation by 2020 and halt the loss of all natural forest by 2030.

The court also recognised the Amazon as an "entity subject of rights" - meaning it has the same legal rights as a human being - the first ruling of its kind in Latin America.

The Amazon now has the same legal rights as a human being. Source: Getty

The government must also include the participation of plaintiffs, affected communities, and scientific research organisations in its work.

Pablo said he is very excited to be part of the planning and decision-making process.

“The government now needs to make short, middle, and long-term plans,” he said.

“All of us get to be a part of planning, to save our environment.”

'We should learn from these kids'

Cesar Rodriguez, the lawyer who represented the group told SBS News he had never worked on a case like it before.

The highly regarded human rights lawyer from Dejusticia said the straight-forward, open-minded approach of the young people was surprising.

“It was actually quite inspiring and energising because sometimes when you do this work, you can get tangled in all the technicalities,” he said.

Read More
'We share the same backyard': The islands disappearing off Australia

He said that while the world continues to criticise young people for their apparent “laziness” and indifferent attitude, the group were proof of exactly the opposite.

“There is that view that young people are ‘bumper sticker activists’. That they’re happy clicking on a petition but they won’t do anything in the real, physical world,” Mr Rodriguez said. “But in their case, it’s kind of the contrary”.

Pablo said the job for young people is far from over. Now the difficulty will be keeping the government in check and the issue in the spotlight.

Back in their hometowns, Gabriela said members of the group are attending schools and universities to talk not just about the case, but the wider issue of climate change and the future for young people.