An interactive tool is bringing clarity and transparency to our understanding of Chinese-funded aid projects in the Pacific Islands region. 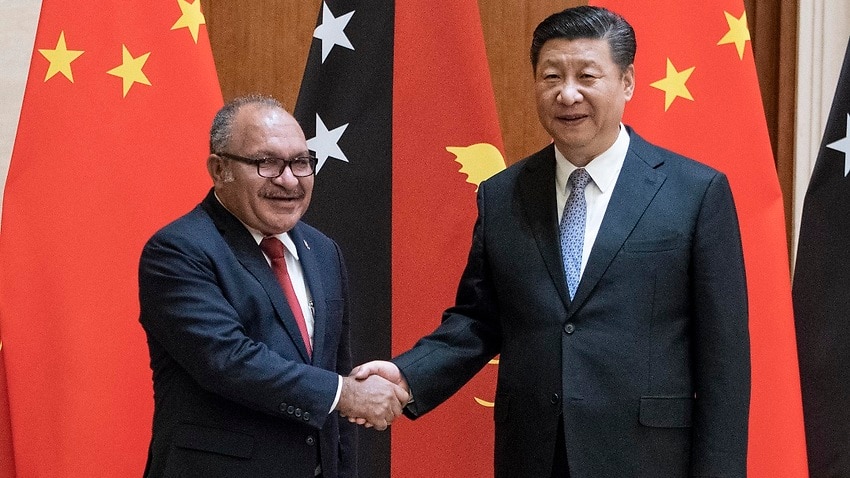 The amount of aid China is pouring into Pacific nations has been overstated and may have peaked as the deadline for repaying Chinese loans begins to bite, according to a new study of the region’s aid flows by the Lowy Institute.

Australia remains the largest donor to the Pacific island nations by far, contributing $7.7 billion in aid between 2006 and 2014 - making up 42 per cent of the total foreign aid flowing to the region in 2016.

China, by contrast, contributed an estimated $1.78 billion on 218 projects from 2006 to 2016, making it the fifth largest donor to the region, according to the research.

"Our data shows that there is a big discrepancy between what China has committed to the Pacific and what is actually being spent,” said the Lowy’s Jonathan Pryke.

“I’m not trying to understate China’s presence, they are a big new player, they've been ramping up their engagement pretty fast since 2006... but the narrative has gone a bit too far that China is taking over.”

China’s biggest commitment to the region so far is a $3.5 billion promise made in  2017 to build a much-needed national road network in PNG, but the researchers found no evidence the work had commenced.

Read More
What is China's Belt and Road Initiative?

Mr Pryke said Chinese investment in PNG was likely to continue to grow due to its economy’s size and natural resources, but said China’s aid to other Pacific nations may have peaked.

“Our data shows there has been this binge of taking cheap credit from China,” Mr Pryke said.

“[But] from 2016, Samoa, Tonga, Vanuatu, Fiji have not taken new loans from China. They are aware they might have gone too far here, the IMF has warned some of these countries they are approaching degrees of debt distress. The hangover is starting to settle in. So the appeal and incentive for Chinese infrastructure, which is of varying quality, is starting to wane.”

China’s aid in the Pacific, traditionally seen as Australia’s regional “backyard” has become a hot topic in the context of debate over China’s global intentions as its economic and military reach grows.

Australia's Concetta Fierravanti-Wells caused a stir when she slammed Chinese aid to the Pacific as "useless". Source: AAP

Unlike OECD countries like Australia which publish aid data, China is opaque about its aid volumes.

The researchers compiled data on almost 13,000 Pacific aid projects, concluding 70 per cent of China’s Pacific aid takes the form of concessional loans for big infrastructure projects that must eventually be repaid. The rest is in the form of grants.

The Australian Pacific and international development minister Concetta Fierravanti-Wells earlier this year caused a furore with her blunt comment that Chinese aid to Pacific nations was “useless” and employing mainly imported workers to create “white elephants”.

Questions were also raised in April over a huge port China built for cruise ships in Vanuatu which some suggested could have a military use as well, although this was later rejected by Beijing and Port Vila.

Read More
The dragon and the kangaroo: 45 years of Australia-China relations

Despite a foreign aid budget that is the lowest by share of gross national income in the country’s history, Australia has isolated its Pacific aid program from years of foreign aid cuts.

It stepped in earlier this year to fund the building of undersea internet cables connecting Australia with PNG and the Solomons after security concerns were raised over the Chinese firm Huawei.

A spokeswoman for the Department of Foreign Affairs and Trade, which funded the Lowy research, told SBS News the Australian government welcomed China’s role as a donor in the Pacific.

“Australia has stepped up our engagement in the Pacific, including through our aid program because the stability and economic progress of the Pacific is of fundamental importance to Australia,” she said.

“Projects such as the Coral Sea Cable System will ensure Papua New Guinea and Solomon Islands have significantly improved telecommunications infrastructure, which in turn will help drive their economies.”