Marine biologist Johnny Gaskell and his team have made a significant discovery but he says its location is too important to give away.

"Seeing the corals was the most amazing part," Mr Gaskell told SBS World News, adding the stand out for him was the branch-shaped Staghorn Coral species.

"For many people, it's a deep lagoon with pretty corals and fish. For me, it's a haven for huge unique and delicate coral colonies.

"It was amazing to dive a location that may not have been dived before."

Mr Gaskell says he could only explore the waterhole for about one hour during high tide, when it was safest, and measured it 150 metres across and at least 20 metres deep – but he adds it needs to be explored again to learn its true depth.

The hole – in a location he's keeping top secret to preserve the health of the coral colonies - could play an important role in sustaining the reef, he says.

"Hopefully it will be left alone. An influx of divers would severely damage the coral colonies, as they are more delicate than usual." 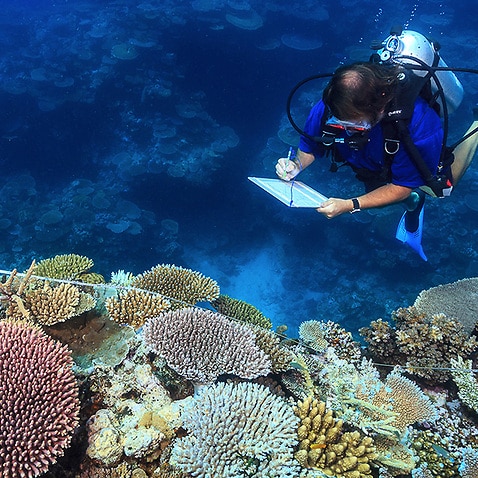 Mr Gaskell says despite an increase in water temperature at the reef and a Category 4 cyclone that passed over the location in March this year, the coral have kept their good health.

The protected coral living in the hole could help other parts of the reef regenerate," he says.

"Cyclone Debbie destroyed many delicate colonies early this year, but these corals were protected and escaped unharmed.

“This is extremely important for the ecology of the reef, as this lagoon will play a big role during this year's coral spawning," he says.

"Recolonisation to damaged areas will be the key to this part of the reef bouncing back."

But he adds, “there is still so much colour and beauty” that needs protection across the 2,300 kilometre-long Great Barrier Reef known as the largest living structure on the planet.

The reef is home to an abundance of marine life, according to the Great Barrier Reef Marine Park Authority, including 600 types of soft and card coral, more than 100 species of jellyfish, 1,625 species of fish, 133 shark and ray species.