'There is no alternative': Victoria plunges into sixth lockdown of the coronavirus pandemic

It comes less than two weeks after the state emerged from its last lockdown - and less than two days after it revelled in what was thought to be a 'donut day'. 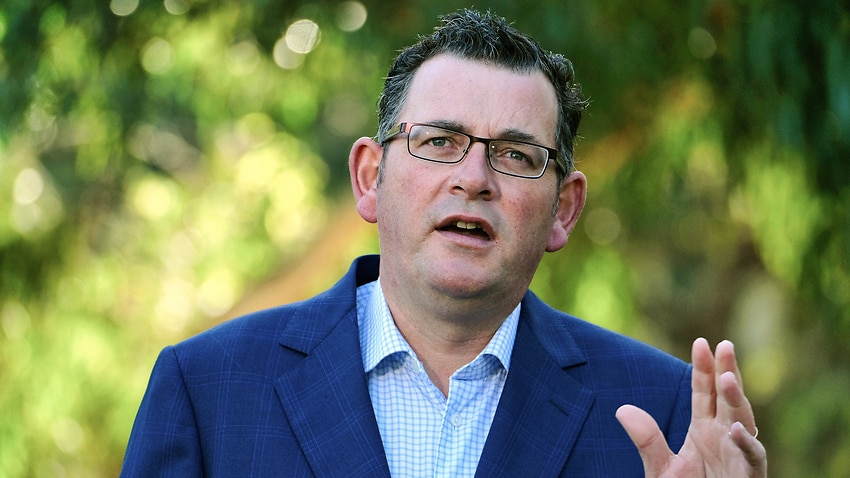 Victoria has entered its sixth COVID-19 lockdown after recording a total of eight coronavirus cases on Thursday.

Premier Daniel Andrews on Thursday afternoon announced the whole state would be placed into a seven-day lockdown - which came into effect at 8pm - to contain a growing outbreak of COVID-19 in Melbourne's west.

"None of us want to be in a situation where we have to lock down again, but the Delta variant moves so fast that with even a handful of positive cases that can't be linked, that hasn't been in isolation through their infectious period, there is no alternative for us but to listen to our public health experts," he told reporters.

He warned that even waiting a few days before locking down could have seen the new cluster spread beyond control.

The same rules that applied during last month's lockdown will be reimposed, including the 5km travel limit for exercise and shopping, and compulsory masks indoors and outdoors.

Mr Andrews reiterated that a man in his 20s had died from COVID-19 in NSW on Wednesday.

"This is relevant to everybody," he said. "Nobody wants to get this. Nobody can afford to ignore this. No government can refuse to accept advice, and act to do what’s right. That's what I’m doing today, that is what the government is doing today - as painful and difficult as it is."

He said there will be an announcement on Friday morning regarding support for impacted businesses.

Mr Andrews said Victorians were given less than four hours' notice of the lockdown because an outbreak occurred at a restaurant on the eve of the last one.

Regional Victoria is included in the restrictions in part because virus fragments were detected in wastewater in Wangaratta.

The premier is urging every Victorian with COVID-19 symptoms to get tested.

“Nothing is more important. You get symptoms, you go and get tested. We are getting results back really fast … we will get you through as fast as possible and you will have done something genuinely profound for your health and safety, and for the safety of everybody,” he said.

'We don't have enough vaccinated people'

Mr Andrews said lockdown was the best way to battle the state's Delta outbreak because not enough people have been vaccinated.

“I’m not for a moment standing here saying I’m pleased that this is the only option,” he said. “I wish we weren’t here.

“Whether it is sustainable or not, you’ve got to think - what is the alternative? To be really frank, we don’t have enough people that have been vaccinated, and therefore, this is the only option available to us.”

Read More
Young Australians should be next priority in the vaccine rollout, key Doherty modelling shows

He said that as the vaccination rate increases, the state will have “many more” options.

“100 per cent is where you really want to get to, but we all acknowledge we won’t get to that.

“But 80 per cent as a minimum, if we can get up above that - and I’m confident we will - the world [will be] very, very different. But we are a long way from that now.”

Two of Victoria's eight new cases will be included in Friday's numbers. They are close contacts of a teacher from Al-Taqwa College and her husband, both in their 20s and who live in the Hobsons Bay council, who tested positive on Wednesday with the source of their infection unknown.

Authorities are racing to trace the sources of the couple's infection and that of a man in his 20s who lives in the Maribyrnong council.

He works at a warehouse in Derrimut and he and his housemate are now isolating.

The three other cases from Thursday's numbers are linked to the Moonee Valley testing site cluster.

The Hobsons Bay man is also a player with Newport Football Club, whose players are now isolating.

Al-Taqwa College is a tier one exposure site from 28 to 30 July and has been closed while more than 2,000 students and 300 staff get tested and self-isolate. A testing site has been set up at the school.

It was a significant location for transmission in last year's second wave, with at least 210 cases linked to it at the time.

The state's exposure sites can be seen here.

Thursday marks the one-year anniversary of Victoria recording 725 cases, the highest daily number of infections in its deadly second wave of the virus.