A new generation of Indigenous Australians are training to become police officers with the hope of healing the relationship between communities and the force. 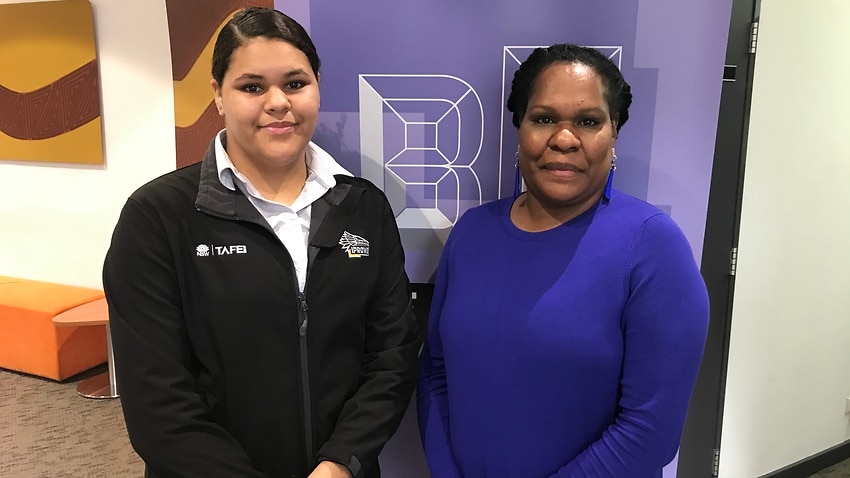 Jessica Aragu-Bailey and her mother, Glenda Aragu who is also an IPROWD graduate. Source: SBS

Eighteen-year-old Jessica Aragu-Bailey is determined to drive change within the NSW Police Force.

"I want to advocate for the Indigenous community," she told SBS News.

"I want to empower and strengthen them and build those ties [with police]."

Jessica, a Torres Strait Islander, has just completed an intensive 18-week TAFE program designed to accelerate her path into the force.

Seven years ago, her mother Glenda Aragu graduated from the same course but the Sui-Baidham and Dhoeybaw woman never pursued a career as a police officer.

“I was raising four kids on my own. My youngest was only two years old.”

Both mother and daughter enrolled in the program hoping to better represent their community.

“Our mob need to help our mob,” Glenda says.

Her daughter is now on track to accomplish what she once set out to do.

“I am so proud. It is so exciting she will fulfil everything that I've started.”

The program was founded in 2008 by Gamillaroi man Peter Gibbs, who is based in Dubbo. It followed the death of his sister, Fiona, in police custody in 1997.

"There's a really tragic history and very poor relationship between police and Aboriginal communities," he said.

"It took a long time for me to come up with a concept that could transform our relationship with the police, particularly here in western NSW where we have, in some of our communities, predominant Aboriginal populations.

"But very, very few Aboriginal people make their way into the force and then work in these remote communities. And that’s what I set out to do many, many years ago and we’re starting to see some of that change."

Completing the program does not guarantee admission into the NSW Police Academy, but it can fast track the process. Since its inception, more than 800 students have graduated from the course and just less than a quarter have forged careers as police officers.

"You know, one person, one Aboriginal person in a police role in a remote community, could actually transform that community. Just one person," Mr Gibbs said.

Over the 18-weeks, students engage in academic, fitness and leadership training.

There is also a specific focus on Indigenous culture and heritage.

Read More
What we can learn from Australia's only Indigenous-run police station?

"We want our people to be very confident in where they come from, know their families, know their history. To be that proud representative of their community within the NSW Police Force," Mr Gibbs said.

Jessica says she’s been learning about the disadvantages and inequalities faced by her community.

"Through the program, we talked about racism and youth incarceration," she said.

"I found out that [Indigenous] youth incarceration is high compared to non-Indigenous youth and I believe that gap needs to be reduced."

The past few weeks have seen tens of thousands of Australians march across the country in support of the Black Lives Matter movement in the United States and with Australia’s First Nations people, calling out police brutality.

More than 432 First Nations people have died in custody since the Royal Commission into Aboriginal Deaths in Custody in 1991, and Indigenous adults now make more than 28 per cent of all people in prison, while only making up 3.3 per cent of Australia’s population.

Daniel Boyce says there is a need to strengthen relations between Indigenous communities and police. Source: SBS

Since he was a child, 22-year-old Kamilaroi man Daniel Boyce, also an IPROWD student, has dreamed of joining the force.

"I do believe the bond between the police and communities can be strengthened. In my future career as a police officer, I really want to strengthen the relationship," he said.

Project coordinator Mr Brown says the program paves the way for other careers too.

"Once the student has come through this course, we have a full-time project officer that works with them in finding a career path."

The program’s success has now sparked interest from other states. Talks are underway about it being rolled out across the country.

Share
Published 22 June 2020 at 6:18am
By Abbie O'Brien
Topics
IndigenousAustralia