A refugee who was in limbo on Manus Island for four years has found a backdoor to start a new life in Canada.

From the tropical hellhole of the Manus Island detention centre, to snowy Canada, a refugee in limbo for four years has found a backdoor to start a new life.

The 24-year-old was one of the 600-odd men barricaded inside the mothballed detention centre since it closed on Tuesday, too scared they'll be attacked by locals if they move to alternative accommodation on the island. They're running out of water, medication and food. 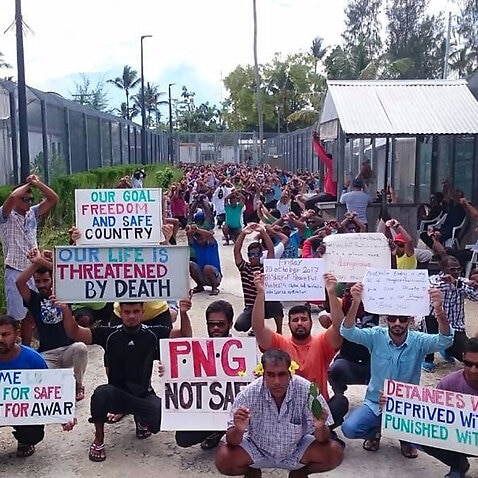 The Taylors' daughter Chelsea met Mr Taghinia during her time as a healthcare worker on Manus Island.

The family spent the past 22 months working with the Canadian and Australian governments to allow the resettlement.

Mr Taghinia is still in disbelief.

"My soul is on Manus Island," he told AAP on the phone from Canada. File image of refugees and asylum seekers holding up banners during a protest at the Manus Island immigration detention centre in Papua New Guinea.
AAP

"As long as there are people there I can't really rest, I can't have a feeling of relief. I need every single one of those guys off the island."

Mr Taghinia said it would take a while for the psychological and physical trauma of the past few years to heal.

He's had some problems with abdominal bleeding from stress.

He plans to study to become a human rights lawyer and wants to help contribute to Canadian society to thank the country for giving him a go.

Mr Taghinia is in awe of the Taylor family for the lengths they have taken to help him.

Since his arrival in Canada, he's felt immense guilt when he's caught himself experiencing brief moments of joy.

"Even small moments when I was about to feel good, a few seconds later it came to my mind - the guys on Manus - they don't have water, they don't have food, they are dying there," he said.

AAP understands two other refugees who were detained on Nauru have found resettlement in Canada under a family reunion scheme.

The Canadian government under Justin Trudeau has allowed more than 40,000 Syrian refugees to resettle since November 2015.

Almost 15,000 have been privately sponsored by individuals and groups for up to a year and then they must find work to support themselves.

18 hours ago My Australia

The Feed 21 hours ago

Russia and the US held talks overnight amid rising tensions over Ukraine. Here's what they discussed