LGBTIQ+ people seeking asylum in Australia face a unique set of challenges and often find themselves isolated in a new country, say a support group working to change that. 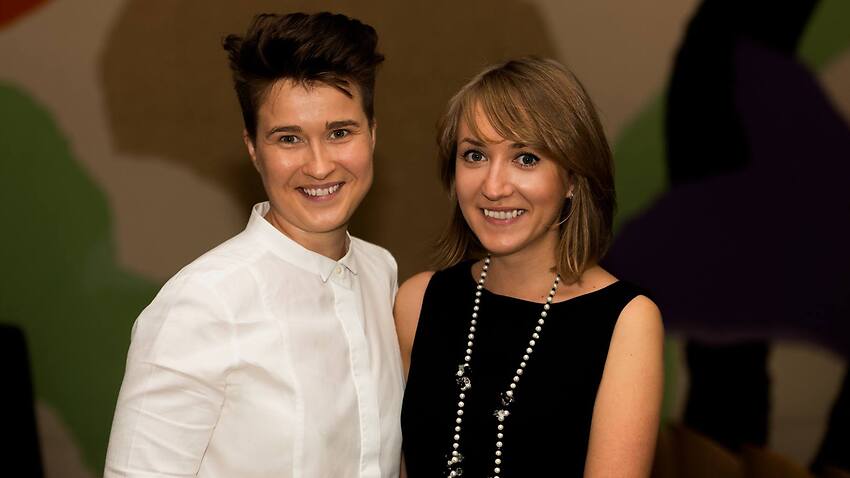 Tina and Renee Dixson fled their country of birth after receiving threats due to their sexuality. Source: Supplied

Like many refugees, Tina Dixson and her partner Renee's decision to seek asylum in Australia was a matter of life or death.

The couple had been working as LGBTIQ+ advocates in their home country (the location of which they are unable to disclose for safety reasons) and internationally for years before they made the difficult decision to uproot their lives.

“We had always experienced lots of threats and things like that but at some point in 2012 ... a series of very serious events happened to us” said Ms Dixson, who changed her name when she arrived in Australia.

“At that point, the only choice for us literally to survive was to leave the country,” she told SBS News.

The couple are just two of a significant group of asylum seekers in Australia forced to leave their home country because of their sexuality, many of who converged in Canberra on Thursday and Friday this week for a conference on the intersection of LGBTIQ+ identity and forced migration.

The conference, Queer Displacements: Sexuality, Migration and Exile, organised by Ms Dixson and her partner, invited academics, asylum seekers and policymakers to come together at the Australian National University for a “holistic” discussion about the barriers refugees from minority groups face.

“Often we talk about LGBTIQ+ asylum in a very single lens, for example when we talk about the war or the possibilities of persecution, while there is much more to it,” Ms Dixson said.

In the hopes of countering some of the isolation and discrimination faced by LGBTIQ+ asylum seekers and refugees, Ms Dixson created the Queer Sisterhood Project; a safe space for queer refugee women to support each other.

A crowdfunding campaign organised by Ms Dixson and the Queer Sisterhood Project raised more than $5,000 to cover 26 asylum seekers’ travel expenses so they could attend the conference this week.

Like Ms Dixson, Sam*, a 26-year-old trans asylum seeker from South East Asia, said the decision to leave his country of birth was a difficult one.

“I had a very stable job, a good life, I have a very happy family, but hiding for about seven years my sexuality is not an easy position to be in,” he said.

“It’s really hard for me to stay here, I feel lonely, I don’t have anyone and there’s not much support I can get here.”

After almost three years in Australia, Sam is still waiting for his protection visa application to be approved. During that time he has been unable to access mental health services for almost a year.

Ms Dixson said the lack of services addressing the specific needs of LGBTIQ+ asylum seekers is one of the biggest issues facing the community.

“Most services are either equipped to work with you as a LGBT person or as a refugee person and they do not understand the complexity of your case,” she said.

“You would go to a refugee service, for example, as a trans person and you might need access to hormonal therapy, but refugee services don’t know that’s an issue.”

Concerns have also been raised over the personal questions LGBTIQ+ asylum seekers are forced to answer to prove their eligibility for a protection visa.

Earlier this year, Buzzfeed News revealed two Bangladeshi men seeking asylum in Australia were asked by the Department of Immigration to share in-depth details about their sex life to prove they were gay.

Ms Dixson said the lack of access to adequate support services during her first four years in Australia added to the isolation and marginalisation she and her partner were already experiencing after arriving in a new country.

For this reason she wants to see more training introduced for those working in the immigration process around sexuality and gender identity, as well as a wider rethinking of how asylum seekers are viewed.

“People think of refugees as families, meaning a husband and wife, and then the LGBTIQ person becomes the exception, the other, this really small group,” she said.

“A lot of asylum stories are very similar, but also there is a great diversity, and we need to work to acknowledge that.”

In Papua New Guinea, where Australia has previously placed asylum seekers in offshore detention, consensual sexual acts between men are punishable by up to 14 years in prison.

“[Peer-run spaces] provide you that safety, they provide you with the understanding that you do not have to explain yourself,” Ms Dixson said of the Queer Sisterhood Project.

Before discovering the project, Sam said it was difficult to find a community in Australia that understood his situation.

“I don’t see anyone seeking asylum from LGBT groups,” he said.

Broadcasts from the Queer Displacements: Sexuality, Migration and Exile conference can be viewed here.

LGBTQIA+ support services can be accessed via reachout.com. Readers seeking support with mental health can contact Beyond Blue on 1300 22 4636. More information is available at Beyond Blue.org.au