Prime Minister Scott Morrison announced the government's 2050 net zero commitment on Tuesday. This is what locals in the industrial Illawarra region think of the plan. 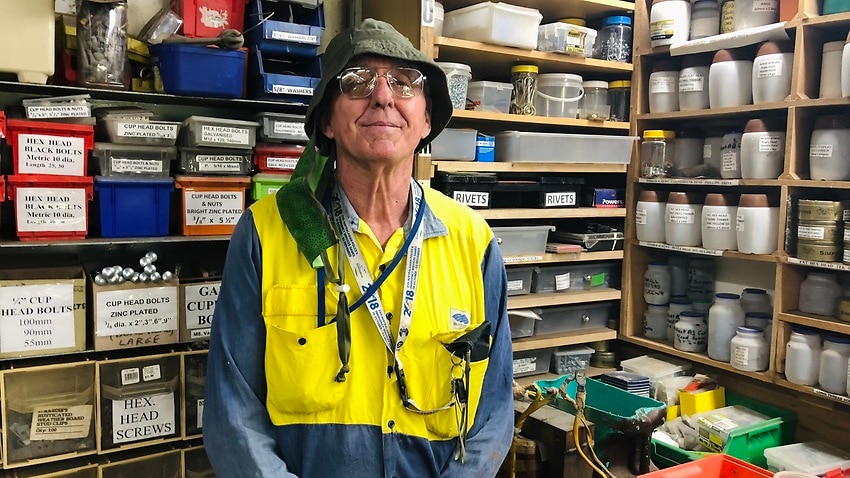 The Mount Keira Scout camp sits atop an old mining site in the Illawarra region, just south of Sydney, and the volunteers from the local men’s shed are in charge of maintaining it.

They meet every Wednesday for handy work and morning tea - but today, they're installing solar panels.

It’s a sign of the times, and while the former miners, engineers and boilermakers fondly look back on the past, they agree their discussions have increasingly turned to the future of their coal-reliant region.

“From my point of view, it's time to get out of fossil fuel. Let's go solar, let's go natural, we've got a big sun up there we can use,” he told SBS News.

“You just diversify, rejig yourself, reinvent yourself, that's the important thing here.

“I'd like to see my grandkids be able to enjoy this world that we have now.”

Fred Mirande (left) and John Sharples at the Men's Shed in Mount Keira, in the Illawarra region of New South Wales.

For Harry Phillips, who began his career working at Sydney's Cockatoo Island dockyards, he worries about employment in the region.

“It's (mining and manufacturing) jobs for people,” he told SBS News.

“Not just the guys that actually do the work, but the supervisors, the people that sell the equipment, it's so many different jobs for that industry.”

Richard Allen, a former draftsman who once worked in submarine manufacturing, agrees.

“If we don't maintain those industries or new industries - heavy machinery type industries - then there'll be a lot of people here out of work,” he told SBS News.

“[But] I don't think we've got any choice; I just look back over the years, the last few years, and the bushfires that we've had, we've never had anything like that when I was a kid."

It's why residents here were watching the climate debate in Canberra with a close eye, concerned a net zero target could mean even greater job losses.

Scott Morrison's promise on Tuesday that his government would not stand in the way of new coal ventures, and will instead create an extra 62,000 jobs in the industry, have some breathing a sigh of relief, while others are more sceptical.

“How many of the [new jobs] will actually be in Wollongong?"

Changing face of an industrial centre

The Illawarra region has long been synonymous with coal mining and heavy industries, and with the first coal mines opening nearly 200 years ago, it’s also been a major employer.

The area around Wollongong hosts Australia's largest steelworks, fed by coal mined in the hinterlands.

Wollongong-based Ron Cairns is a mining historian and a former electrical engineer in the mines.

Ron Cairns is a mining historian who has published a number of books on the Illawarra's mining history. Source: Jennifer Scherer/SBS News

Although he is passionate about maintaining the region’s mining legacy, he says the region is experiencing a shift.

“I think [coal mining] is diminishing somewhat in importance now, but originally, it was the industry,” he told SBS News.

“A number of mines along the coast are  no longer here [and] some 20 odd thousand people worked at the steelworks once, a huge number of people. Now it's down to a small number.”

Health care and social assistance, education and training and retail trade, along with construction and manufacturing, are now key areas of employment for people in the Wollongong area, figures from Wollongong City Council show.

Wollongong City Council declared a climate emergency in 2019, recognising urgent action is needed from all levels of government to address climate change.

“Wollongong is sandwiched between the escarpment and the ocean, and that has specific geographical features which means we're highly impacted by rain events and also sea level rises and of course bushfires.

“In contrast, we have one of the biggest emitters of greenhouse gases in the country and that's the steelworks - that's a negative in some respects, but I know the steel works in regards to their approach are certainly working hard now in the light of climate change of mitigating their greenhouse gases as well."

While carbon intensive industries such as Bluescope Steel’s Port Kembla steelworks are investigating in ways to incorporate emerging green technologies to reduce emissions, leaders in the region say the time to pivot to more sustainable alternatives, is now.

“Yes, coal has a future, but I would say its future is limited,” Mr Bradbery told SBS News.

“We've worked hard as a council to mitigate our greenhouse gas emissions to net zero by 2030, that is what we can control as a council."

Farmers are among those most affected by climate change but are also becoming some of the most innovative.

Landon Hodgkinson is a sixth generation sheep farmer at his farm in Yass, in the Southern Tablelands close to Canberra.

He welcomes the federal government’s plan to incentivise renewable sources and has already been implementing more solar and battery alternatives.

“I think the incentives they're trying to push in regards to getting off the grid with solar, and obviously with some new technologies, will really cut down our costs and our emissions,” Mr Hogkinson told SBS News.

After suffering devastating drought, and then bushfires, Mr Hodgkinson is no stranger to the effects of a changing climate

“The climate’s always changing with the cycles,” he said.

“We're beholden to mother nature, we just have to adapt and change with the different seasons.”