Argentina's Congress is expected to debate the legislation to legalise abortion in the coming weeks. 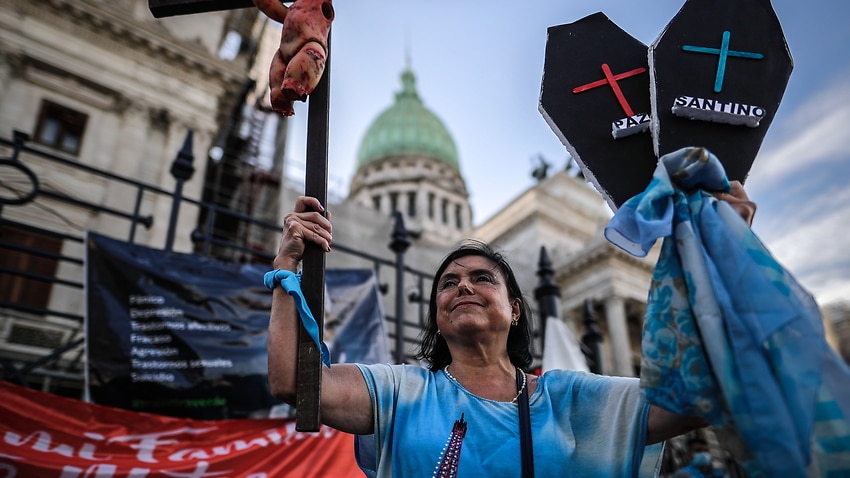 People participate in a demonstration against the Bill on Legal Abortion, in front of the National Congress, in Buenos Aires, Argentina. Source: EFE

Thousands of anti-abortion protesters, many of them mobilised by Catholic or evangelical groups, have demonstrated across Argentina against a government-backed new bill to legalise abortion.

The largest group congregated in Buenos Aires before the Congress, which is expected in the coming week to begin debating legislation on a matter that has bitterly divided the traditionally Catholic South American nation.

Marchers around the country carried signs with slogans like "Save Both Lives!" and "March for the Unborn".

Jorge Gomez, executive director of Aciera, the Christian Alliance of Evangelical Churches of Argentina, called it a "spontaneous outpouring".

A demonstrator against abortion holds two fake coffins as she protests against the legalization of abortion. Source: AP

Argentines who support women's right to choose also called for people to take to the streets.

The National Campaign for the Right to Legal, Safe and Free Abortion urged backers to "paint Argentina green in coming weeks", to wave green handkerchiefs as a symbol of women's rights.

Mr Gomez, however, said it was inappropriate for the draft legislation to be taken up amid the ongoing pandemic and at a time when "Argentine society needs unity to solve structural problems such as poverty".

Read More
Massive protest against ban on abortion in Poland

This will be the ninth time in majority-Catholic Argentina, homeland of Pope Francis, that a bill to legalise abortion has been presented in parliament.

On the last occasion, in 2018, it gained approval in the Chamber of Deputies but was rejected in the Senate.

People participate in a demonstration in favor of the Bill on Legal Abortion. Source: EFE

This will be the first time such legislation originated in the country's executive branch via a proposal from President Alberto Fernandez.

Mr Fernandez has said the new legislation would guarantee "that all women have access to the right to comprehensive health care".

Under a law first passed in 1920, Argentina permits abortions only in cases of rape or danger to the life of the mother.