Thousands of Armenian protesters have gathered in central Yerevan following a peace deal that provided territorial concessions to neighbouring Azerbaijan. 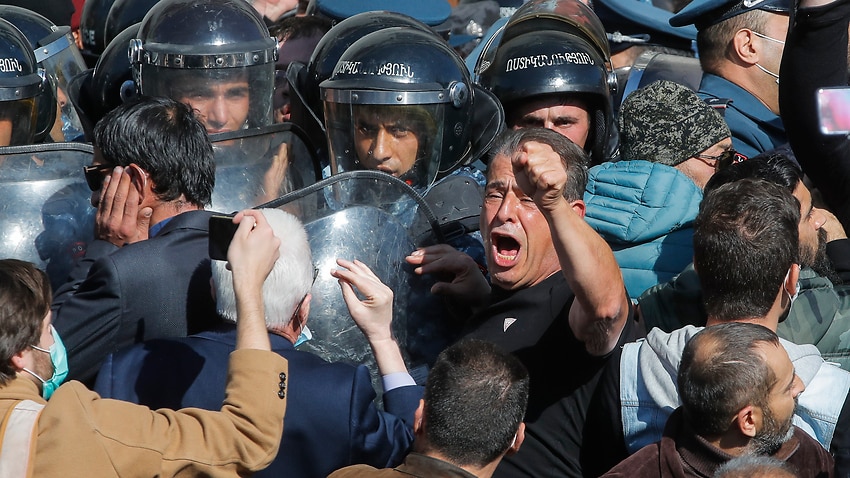 Mr Pashinyan announced a Russian-brokered peace agreement with Azerbaijan over the Nagorno-Karabakh region in the early hours of Tuesday, ending weeks of intense fighting that left more than 1,400 dead and displaced tens of thousands.

The peace accord sparked celebrations in Azerbaijan but fury in Armenia, where demonstrators stormed government buildings and demanded Mr Pashinyan's resignation earlier this week.

"It's our history, our culture, our soul that we're losing. Not to mention the useless sacrifice of thousands of our men, killed or injured," said Jenny, a student in Yerevan.

More than 400 Russian peacekeepers deployed on Wednesday to Nagorno-Karabakh, a region of Azerbaijan seized by ethnic Armenian separatists in a 1990s war, where fierce clashes had raged for more than six weeks.

In Yerevan, police hauled off demonstrators from a gathering of several thousand protesters who were calling the prime minister a "traitor" in front of government headquarters.

"You will not be able to stop the whole country," a member of the Prosperous Armenia party, Arman Abovyan, shouted through a megaphone to protesters who had rallied despite a ban on public gatherings while martial law was in place.

Police said 135 people were detained and then released. High-profile opposition figure Gagik Tsarukyan was among them.

"Azerbaijan was winning militarily and Armenia faced a crushing defeat. But humiliation cannot be a strong basis for sustained peace," the International Crisis Group warned in a report on Wednesday.

Clashes between Azerbaijan and Armenian separatists broke out in late September.

More than 1,400 people were confirmed killed, including dozens of civilians, but the real death toll is believed to be significantly higher.

Speaking with wounded servicemen on Wednesday, Azerbaijani President Ilham Aliyev accused Armenians of destroying "99 percent of the liberated territory" including hospitals, houses and monuments, adding that he wanted Armenia to pay compensation.

"They will have to answer for their dirty deeds," he said.

In Armenia, deputy culture minister Narine Tukhikyan voiced Yerevan's own concern over the fate of the historic, religious and cultural heritage in territory taken by Azerbaijan.

"We are extremely worried because we have already seen the desecration and destruction of Khachkars (traditional Armenian stone steles) by the Azeris," she told AFP.

The peace deal stipulates that Azerbaijan's forces will retain control over areas seized in the fighting, including the second-largest town of Shusha, while Armenia agreed to a timetable to withdraw from large parts of Nagorno-Karabakh.

The region's separatist leader Arayik Harutyunyan called on those who had fled to come back and not to take part in protests, saying the ceasefire was justified.

"We didn't have enough resources, not enough reservists or volunteers," he said, adding that despite his pleas, a special elite division of Armenia's security forces refused to come fight on the front.

As part of the accord, a Russian force of 1,960 military personnel and 90 armoured personnel carriers are deploying to the region as peacekeepers for a renewable five-year mission.

The military said on Wednesday that 414 Russian servicemen as well as helicopters and military vehicles had arrived in Armenia, adding that the peacekeeping force was now in control of the crucial Lachin transport artery connecting Armenia to Karabakh.

Sergei Rudskoy of the Russian General Staff said the servicemen had previous experience on humanitarian deployments in Syria, where Russian forces deployed in 2015 to support the regime of Bashar al-Assad.

The army was in "constant contact" with military leadership in Azerbaijan and Armenia to prevent further clashes, Mr Rudskoy said, adding that a total of 16 observation points would be established along the line of contact in Karabakh and along the Lachin corridor.

Azerbaijan has been pushing for Ankara's involvement in a settlement and Turkish President Recep Tayyip Erdogan said Tuesday that his country would jointly supervise the ceasefire with Russia.

Women embrace as they examine the ruins of a residential house destroyed in a shelling attack on Nagorno-Karabakh capital, Stepanakert, in October. Source: AP/Sipa USA

Turkey, a staunch ally of Azerbaijan, voiced strong backing for Baku's military intervention and was widely accused by Western countries, Russia and Armenia of dispatching mercenaries from Syria to bolster Azerbaijan's army.

Kremlin spokesman Dmitry Peskov said Wednesday however that the deployment of joint Turkish-Russian patrols had not been discussed.

The mountainous region declared independence from Azerbaijan nearly 30 years ago but it has not been recognised internationally, even by Armenia.

Fighting between Azerbaijan and the separatists persisted despite efforts by France, the United States and Russia to broker three separate ceasefires that collapsed as both sides accused the other of violations.