Activists at the rally argued that Virginia was trying to infringe on their right to bear arms, which is protected by the Second Amendment of the US Constitution.

Thousands of armed gun-rights activists filled the streets around the capitol building in the US state of Virginia to protest gun-control legislation that is making its way through the newly Democratic-controlled state legislature.

The Richmond rally maintained a festival atmosphere amid heavy security after Governor Ralph Northam banned carrying weapons onto the capitol grounds, anxious to avoid a replay of the violence at a 2017 demonstration by white nationalists in Charlottesville that killed a counter-protester.

That order was sparked by fears that members of white nationalist and militia groups planned to attend the rally, which organisers the Virginia Citizens Defense League planned as a peaceful show of political power.

The FBI earlier in the week arrested three alleged neo-Nazis who it said intended to use the event to spark a race war. Attendees say the gun reforms are in direct opposition to their right to bear arms.

"What's going on here, if not stopped, will spread to other states," said Teri Horne, who had travelled to Virginia from her home in Texas with her Smith & Wesson rifle and .40-caliber handgun.

"They will come for our guns in other states if we don't stop them in Virginia."

Governor Northam, a Democrat, has vowed to push through new gun control laws and is backing a package of eight bills, including universal background checks, a "red flag" law, a ban on assault-style rifles and a limit of one handgun-a-month purchase. It does not call for confiscating guns currently legally owned.

It is not his first attempt. He called a special legislative session last year after the massacre of 12 people in Virginia Beach, but the Republicans who then controlled the legislature ended that meeting without a vote.

State Democratic leaders and activists believe that move contributed to the November victories that gave them control of both chambers. 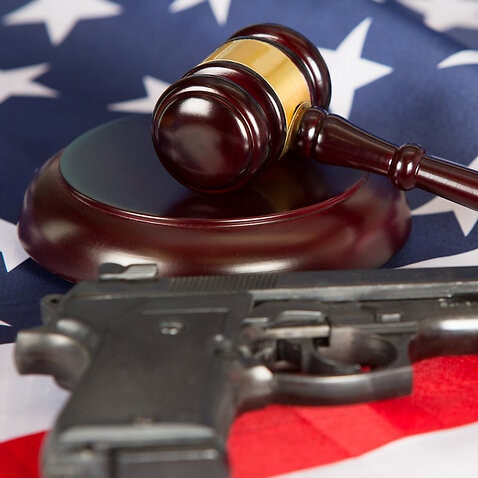 Second amendment debate: Why does the USA struggle so much with gun control?

A group of 13 student activists from March For Our Lives, a gun-control group, slept inside the capitol building ahead of impromptu meetings with lawmakers to encourage them to pass the legislation.

"A lot of the protesters outside have a really extreme reading of the Second Amendment," Eve Levenson, a 20-year-old political science student at George Washington University, said in a telephone interview, adding that some gun owners feared regulation of firearms amounted to confiscation. "What we're fighting for is common-sense laws that are proven to work and are already effective in other states."

By late morning, there were no reports of violence, according to the Capitol Police, and no confrontations beyond a minor scuffle seen at the rally, belying fears that the gathering could spark bloodshed. 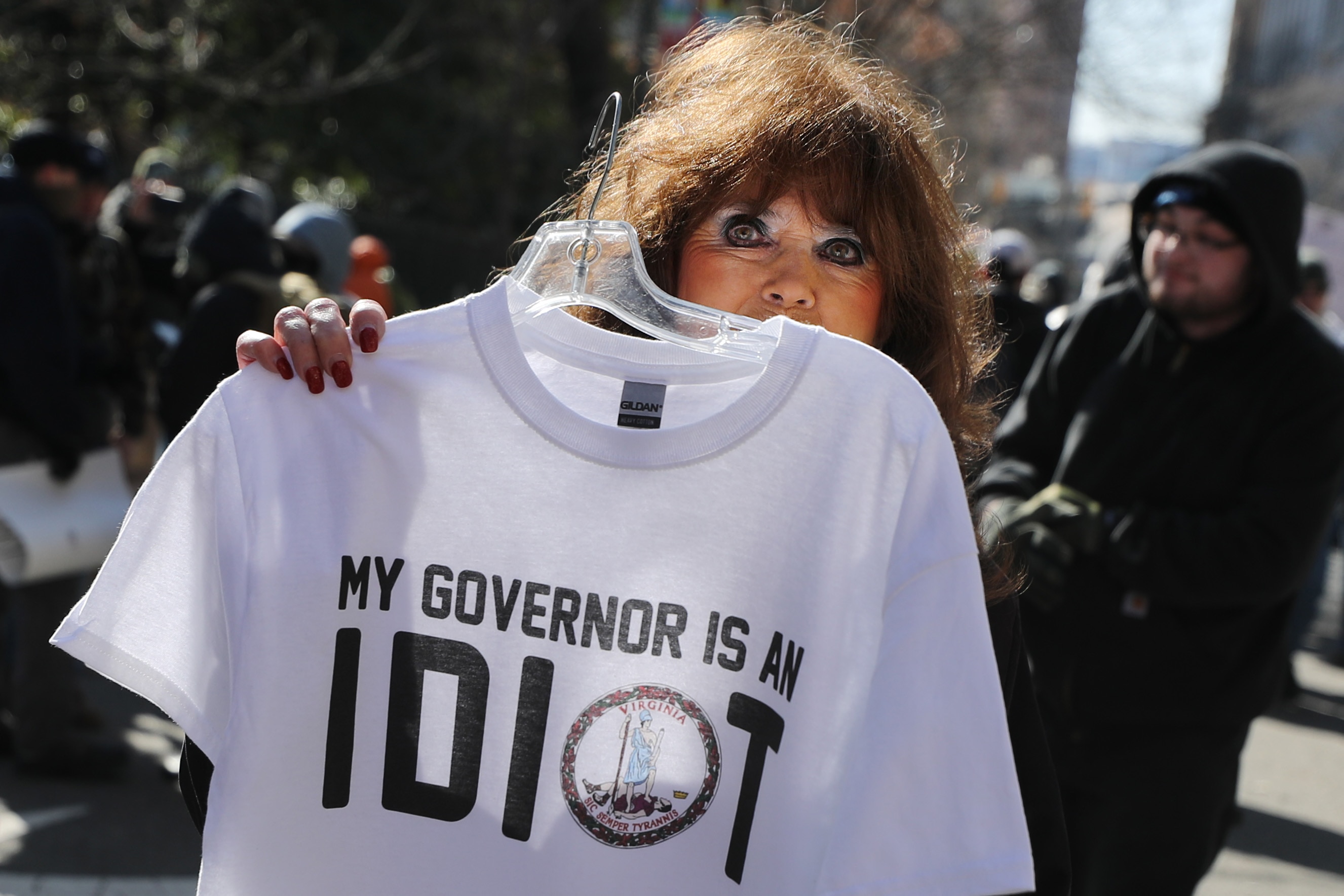 Many in the crowds were dressed in camouflage or tactical gear and carrying weapons as they exchanged pleasantries with others. One held a long sniper rifle. Some browsed vendors' pro-gun T-shirts and other merchandise, much of it carrying slogans supporting President Donald Trump, who has sharply criticised the gun-control proposals.

The Democrat Party in the Great Commonwealth of Virginia are working hard to take away your 2nd Amendment rights. This is just the beginning. Don’t let it happen, VOTE REPUBLICAN in 2020!

Those wanting to enter Capitol Square to hear the morning's speakers had to pass through a single entrance for security screening, leaving their guns outside.

People across the United States were focused on the Virginia gun issue, said Philip Van Cleave, leader of the Virginia Citizens Defense League, which is organising the rally. "They don't want us to fail in stopping this," Mr Van Cleave said. "We've gotten huge donations from other states."

Mr Van Cleave has rejected calls for violence, but he had urged tens of thousands of armed supporters from across the United States to be in Richmond to provide security for his group.

A spokesman for the Capitol police said Mr Van Cleave had worked closely with law enforcement on plans for the rally.

"The Virginia election last November was an indictment of guns, and it was not an outlier," said Christian Heyne, who leads legislative efforts at the gun violence prevention group Brady.

"Virginia candidates flipped things on their head when they won because of the gun issue, not despite it."

While armed insurrectionists from outside states come to Richmond to intimidate a legislature that doesnt represent them, I'm proud to with this group of Virginia-based heroes. #IStandWithVirgina because too many people here have already lost too much from VA's weak gun laws. pic.twitter.com/xhKYuabUFm

The state's gun owners responded with a movement to create "sanctuary cities" for gun rights, with local government bodies in nearly all 95 counties passing declarations not to enforce new gun laws. 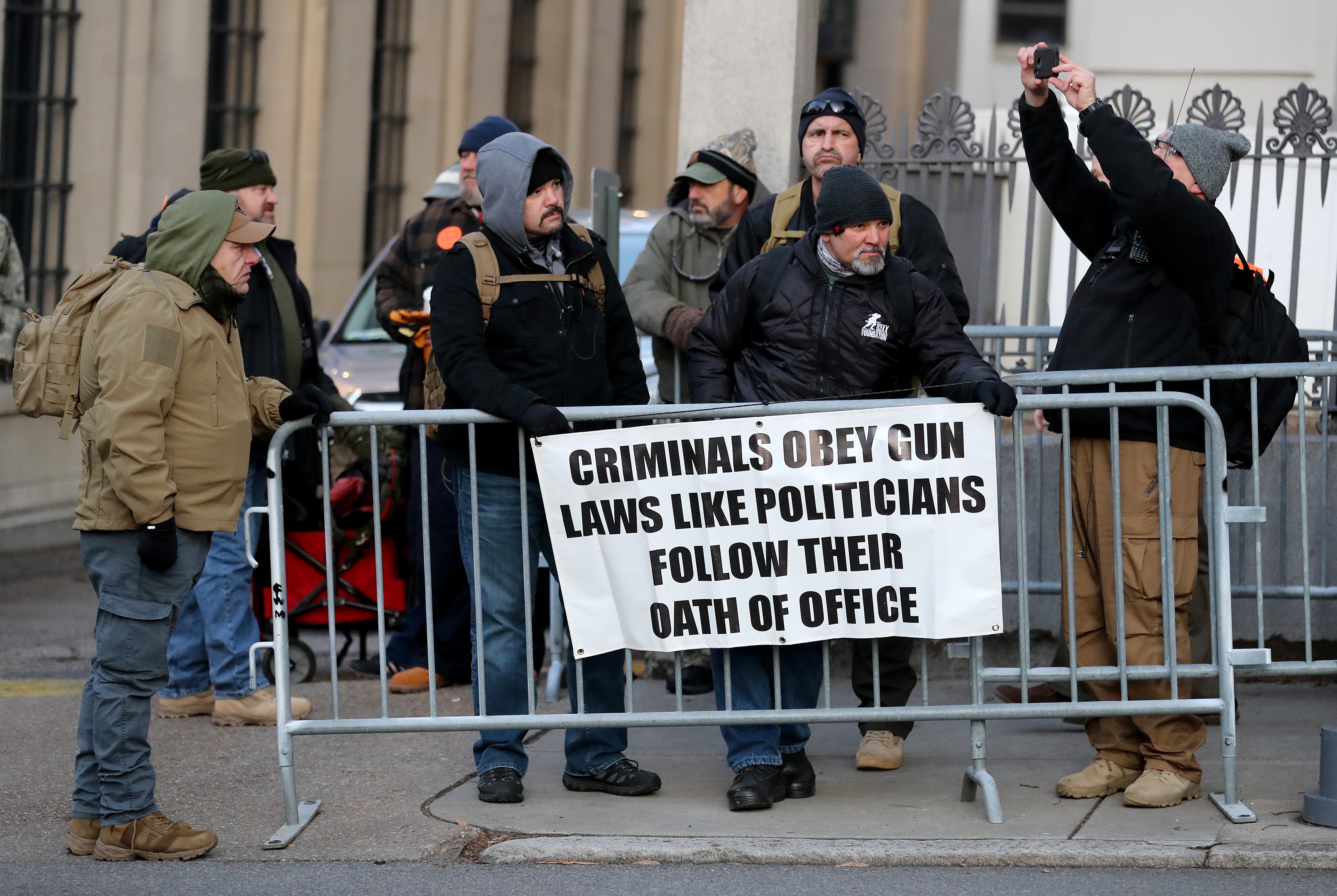 Grayson County Sheriff Richard Vaughan, who is from a sanctuary county, held aloft a banner supporting the Second Amendment on a street in front of the capitol.

Gun extremists are upset because the Virginia #GunSenseMajority thinks people should pass a background check to buy a gun.

More than 90% of Americans support background checks & we won't be bullied out of advocating for common-sense gun safety laws.#IStandWithVirginia Richmond https://t.co/25GNe5yPnS

"Some of these bills being proposed are just unconstitutional and we will not enforce them," Sheriff Vaughan said.

"As a sheriff, I am the last line of defence between law-abiding gun owners and the politicians who want to take away their rights."

The sanctuary idea has quickly spread across the United States, with over 200 local governments in 16 states passing such measures.