Thousands of supporters and critics of Philippine President Rodrigo Duterte staged rallies on Thursday for and against his threat to declare a "revolutionary government", which has fuelled fears of a looming dictatorship.

Duterte warned last month he is prepared to establish a "revolutionary government" to fend off alleged efforts to oust him. He railed against the press, European lawmakers and other critics of his drug war, which has left thousands dead and led rights groups to warn of a crime against humanity.

Duterte, who has courted Beijing while loosening his nation's alliance with Washington, also alleged the US Central Intelligence Agency was part of a plot to destabilise him, and warned he would jail all of his opponents as well as the communist leaders.

Duterte's critics fear the 72-year-old, who has repeatedly threatened to impose martial law, is intent on dragging the country back into dictatorship and allow himself more freedom in prosecuting his drug war.

Under his centrepiece anti-drug campaign, police have said they have killed almost 4,000 "drug personalities" but human rights activists charge that thousands more have been killed by vigilantes and rogue policemen.

On Thursday Pro-Duterte and anti-Duterte protesters, each rally numbering more than 2,000, gathered in front of the presidential palace in Manila with riot police separating them.

Both groups were largely garbed in red - the traditional Filipino colour for revolutionary movements. 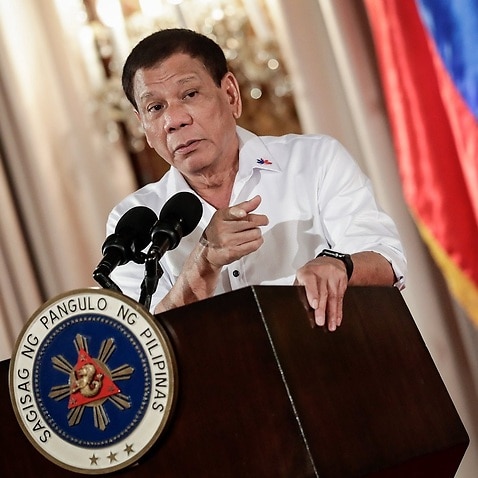 Philippines' Duterte says he once stabbed someone to death

The Duterte supporters waved banners saying 'We support revolutionary government', while the other side carried signs saying 'Fight the Duterte dictatorship'.

The pro-Duterte crowd was allowed to stage their rally in peace, but riot police used fire hoses to drive back the anti-Duterte protesters as they tried to move closer to the palace.

The rallies were staged on a holiday honouring the 154th birth anniversary of Filipino revolutionary hero Andres Bonifacio, with the Philippine leader's critics burning a giant effigy of him while chanting "Down with Duterte!"

Duterte was elected last year largely on an incendiary law-and-order platform in which he promised to eradicate illegal drugs in society by killing 100,000 people.

He has repeatedly expressed impatience with the country's current laws and constitution, saying they impede progress and do not allow him to fully crack down on crime and corruption.

While surveys show he retains wide popularity, opposition to Duterte has been growing in the face of increasing charges of human rights abuses being carried out under his rule.