Three men living in a Sydney immigration detention centre have been arrested and are now in police custody after a lengthy protest spurred by coronavirus fears. 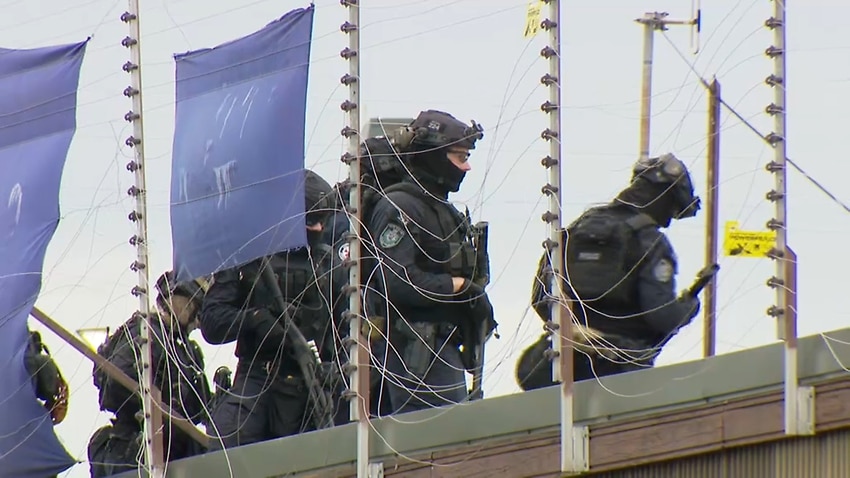 Riot police were called in to break up a rooftop protest at Villawood Immigration Detention Centre. Source: SBS News.

The men had been holding a days-long protest over concerns not enough has been done to stop coronavirus spreading through the detention centre.

Detainee Mohamed Kader said the protesters had not been eating or drinking for days.

“They didn’t eat. They didn’t drink. Their mobile battery is out,” he told SBS Arabic24.

The men were arrested by NSW Police officers before being transferred to federal custody. Source: SBS News.

The trio was arrested by NSW Police on Thursday afternoon and have since been transferred to Australian Federal Police custody.

In a statement, the Department of Home Affairs said there were no injuries to detainees or staff.

“The protest at a detention facility in Sydney has been resolved peacefully today with the assistance of the NSW Police,” a department spokeswoman said.

“The detention centre remains calm and normal operations are continuing.”

The detainees climbed on to the roof on Saturday, carrying banners pleading for their release.

“They are being held in situations where there is more than one person to a room and where people are crowded in common areas during meal times,” he said.

“The government has the option of moving people into the community on bridging visas with whatever conditions they like.

“It also has the option of community detention where they specify people live in a particular place.”

A separate group of asylum seekers and refugees have also been holding a hunger strike inside the detention centre.

Last month, one staff member at an immigration detention centre in Brisbane tested positive for coronavirus.

The Australian Border Force said exposure was limited as the individual had not worked in nearly a fortnight before testing positive.