The Victorian government has received a Memorandum of Understanding from the federal government for its plan to build a dedicated quarantine facility in the state. 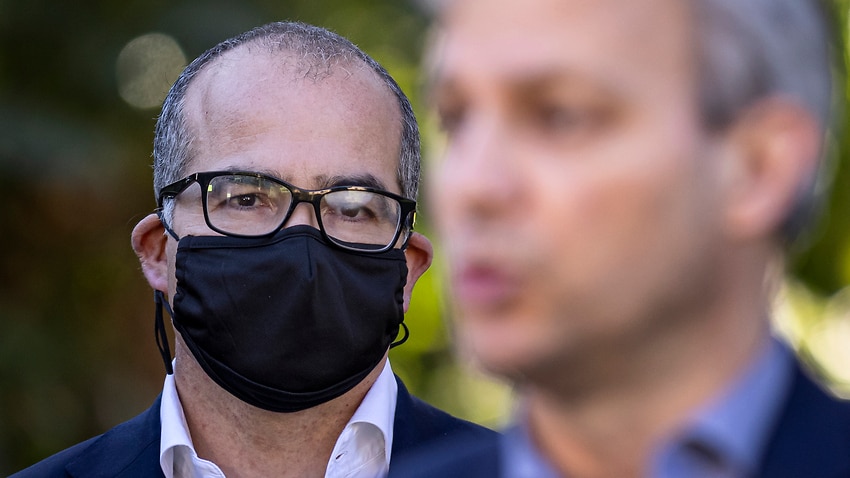 Three locally-transmitted coronavirus cases have been recorded in Victoria, including a second aged care resident in Melbourne, as the federal government announced it would support a dedicated quarantine facility in the state.

The 89-year-old is a close contact of the first resident to test contract the virus at Melbourne's Arcare Maidstone facility, where two workers have also tested positive.

Arcare chief executive, Colin Singh, confirmed the fourth case linked to the outbreak on Wednesday afternoon. The two other infections are also close contacts of previously reported cases and were in isolation for their entire infectious period.

Health authorities announced the three new cases on Thursday, detected from a record 57,519 tests, taking the total number of infections linked to the current Victorian outbreak to 61.

The number was revised down from 63 on Thursday after Victorian health authorities reclassified two cases previously linked to Melbourne's outbreak as false positives following analysis and retesting.

The number of exposure sites across the state remained at 369 overnight, with the full list of locations published on the state's health website.

On Thursday afternoon the Victorian government received a Memorandum of Understanding from the federal government for its plan to build a dedicated quarantine facility in the state.

The Victorian government put the proposal to the federal government in late April, with a site to be built next to an existing quarantine facility for plants and animals at Mickleham, north of Melbourne, as its preferred option ahead of Avalon Airport near Geelong.

Victoria wants the Commonwealth to fund and build the 500-bed facility at a cost of $200 million.

It would chip in $15 million for design of the centre, and also operate it.

The proposal quickly became a political football between Victoria and Canberra, but Treasurer Josh Frydenberg said on Thursday the federal government is close to a decision.

"We have said publicly we are favourably disposed (to the proposal) ... a decision is imminent," he told radio 3AW.

"Avalon does have some very positive characteristics, obviously, being near an airport, and that's relevant in this case."

Mr Frydenberg again noted that the facility would be "over and above" the current hotel quarantine system.

Mr Merlino has said the Mickleham and Avalon sites would work equally well and that the decision lies with the federal government.

Meanwhile, Melburnians are preparing for a second week in hard lockdown after Acting Premier James Merlino announced stay-at-home orders would remain in Metropolitan Melbourne for a further seven days.

Announcing the extension on Wednesday, he said the new variant was "quicker and more contagious than we've ever seen before".

Melbourne residents will only be able to leave home for five reasons - to buy essential supplies, receive or give care, exercise, for approved work, and to get vaccinated - until 10 June, but the travel limit for approved activities will increase to 10 kilometres from midnight on Thursday.

At the same time, stay-at-home orders will lift across regional Victoria from midnight on Thursday, with up to 10 people able to gather outdoors.

Residents will be barred from travelling to Melbourne, however, other than for the five approved reasons.

Deputy Chief Medical Officer Alan Cheng said the number of community cases should decrease over the coming days, but he would not speculate on whether the Melbourne lockdown would be lifted early.

"We really need to look at this every day. It could be shorter, it could be longer, but our best guess at this stage is seven days will be enough," he said.

Professor Cheng confirmed that the "Kappa" variant circulating in Victoria was likely 50 per cent more infectious than during previous lockdowns in the state.

There are also three infections still classified as "mystery" cases, which means contact tracers have not been able to determine the site of transmission, he said.

No new cases in NSW

NSW has extended by a week the stay-at-home order for people who have arrived from Victoria, after the southern state lengthened its lockdown.

Anyone in NSW who has been in Victoria after 4pm on Thursday 27 May will now have to stay at home until June 10.

NSW Health will review the measures then, it said in an alert issued on Thursday afternoon.

No local cases of COVID-19 were detected in NSW after more than 18,000 people were tested following a scare on the south coast.

NSW Health on Wednesday night issued alerts for several possible COVID-19 exposure sites inland at Gundagai and Goulburn, and more on the coast at Jervis Bay, Huskisson and Vincentia.

The venues were visited last month by a Melbourne family of four who were later diagnosed with COVID-19.