Timor-Leste is set for another coalition after the two governing parties in Asia's youngest democracy clinched a majority of the votes in a trouble-free contest praised as 'remarkable' by observers.

The poll came at a tough time for the tiny, impoverished country, with key oil reserves running dry while the government struggles to resolve a long-running row with Australia over lucrative energy fields.

But despite fears of violence, there were no reports of unrest in the campaign and on the day of the Sunday poll, the first parliamentary election since the departure of United Nations peacekeepers in 2012.

The former Portuguese colony, invaded by Indonesia in 1975 and brutally occupied, gained independence in 2002.

With all votes counted, Fretilin, led by President Francisco Guterres, won 29.66 percent of the vote.

The National Congress for Timorese Reconstruction (CNRT) - led by independence hero Xanana Gusmao - had about 29.46 percent of votes, down from 36.7 percent in 2012. Overall turnout was more than 76 percent.

Analysts expect Fretilin and CNRT to continue their coalition in the upcoming government. 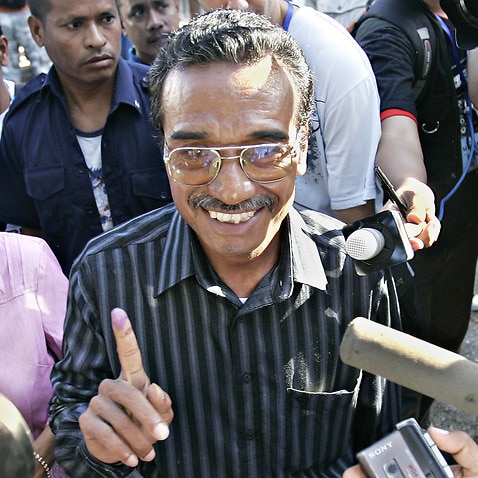 Damien Kingsbury, a Timor-Leste expert at Australia's Deakin University, said it remained to be seen if Prime Minister Maria de Araújo, a member of Fretilin, would keep his post at the head of the new government. The presidency is a largely ceremonial role

"The election was quite successful by any international standard and very remarkable for any developing country," he told AFP.

"It is definitely a good thing for Timor-Leste people if these two influential figures have a solid relationship, it will also (have a) good impact for the region" Sandhiyudha said.

Observers added Fretilin and CNRT's offer to voters was similar, with both promising a better economy and international relations.

The parties instead differentiated themselves by their leadership with CNRT suffering from over-reliance on Gusmao, Sandhiyudha said.

Fretilin and CNRT both won 23 seats in the 66-seat parliament, with PLP securing eight.

Ruak has said he would not join the coalition and criticised the government for focusing too much on megaprojects at the expense of health and education.

Half of the population lives in poverty and the government has struggled to improve the livelihoods of its 1.2 million people.